Kendal, previously known as Kirkby in Kendal or Kirkby Kendal, is a market town and civil parish within the South Lakeland District of Cumbria. Historically in Westmorland, it is 22 miles north of Lancaster and 50 miles south of Carlisle, on the River Kent. It is the third largest settlement in Cumbria, behind Carlisle and Barrow in Furness. Kendal is known for Kendal mint cake, a glucose-based type of confectionery reputedly discovered accidentally by Joseph Wiper during his search for a clear glacier mint. Used on numerous expeditions to mountaintops (including Mount Everest and K2) and both poles of the Earth, its popularity is mainly due to the very astute decision of the original manufacturer's great nephew to market it as an energy food, and to supply Ernest Shackleton's 1914–17 Trans-Antarctic Expedition. By the time the business was sold to competitor Romney's in 1987 there were several rival mint cake producers, many of which are still in business. Kendal's early prosperity was based largely on cloth manufacture. In the 19th century Kendal became a centre for the manufacture of snuff and shoes; the K Shoes company remained a major employer in the town until its factory closed in 2003. Kendal's buildings, mostly constructed with the local grey limestone, have earned it the nickname the Auld Grey Town. 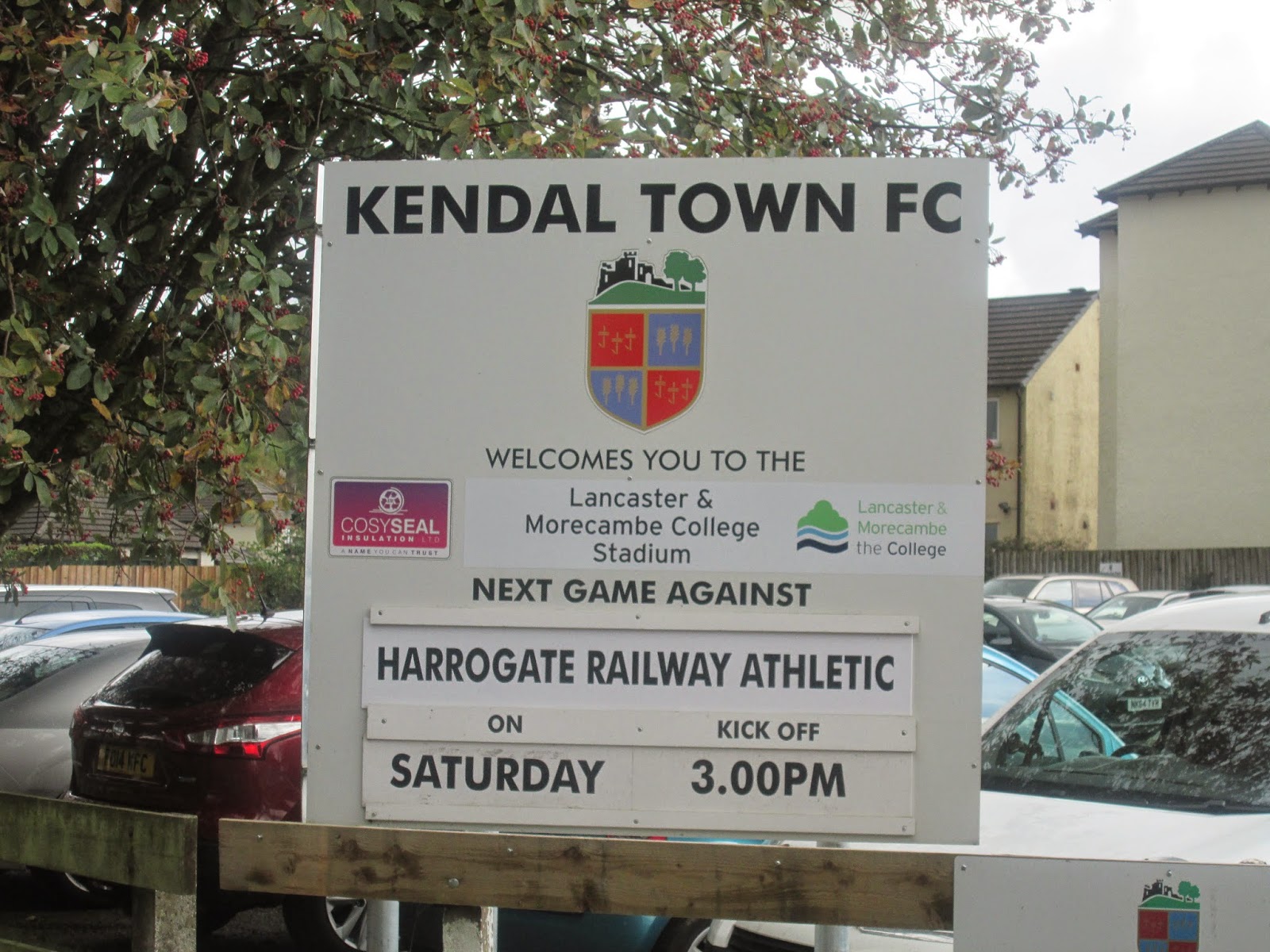 Kendal Town FC was established in 1919 as Netherfield AFC by employees of the K Shoes factory. In 1945 they joined the Lancashire Combination, and were runners-up in their first season. They also reached the first round of the FA Cup, losing to Barrow. They won the Lancashire Combination title in 1948–49, a season in which they again reached the first round of the FA Cup, this time losing to Gateshead. In 1968 they were amongst the founders of the Northern Premier League. They finished bottom of the league in 1973–74 and 1976–77, but avoided relegation on both occasions. During the 1980–81 season they played seven matches against Bridlington Trinity in the second qualifying round of the FA Trophy before finally prevailing in the sixth replay. The repeated rematches cost the club £1,800, and the financial problems together with them finishing bottom of the league in 1981–82 and 1982–83 led to them moving down to the North West Counties League. The club returned to the Northern Premier League when it added a new Division One in 1987. In 1998 they were renamed Netherfield Kendal, before adopting their current name two years later.

The original intention was to visit Scotland to take in the match between Annan Athletic and Arbroath. However, rather late in the day, this plan was scuppered as Arbroath were to play at Montrose in a cup replay. This left Annan and this Pieman without a match. With advance train tickets already purchased it was a case of “where can I go?”. Carlisle United v Stevenage would have been an easy alternative, but I do prefer to visit somewhere new. Kendal Town’s Parkside Road soon became my preference and the 07:30 departure from London Euston was to be used. However, this train is fine for getting to Carlisle for onward travel to Annan but does not stop at Oxenholme. It seemed likely that a further £8:00 would be payable from Lancaster, although this Pieman was considering “other options”. On arrival in Preston, Virgin Trains announced that our service would not be going forward. We had to alight there and catch the next service. Our Edinburgh bound service was stopping at Oxenholme – problem solved! 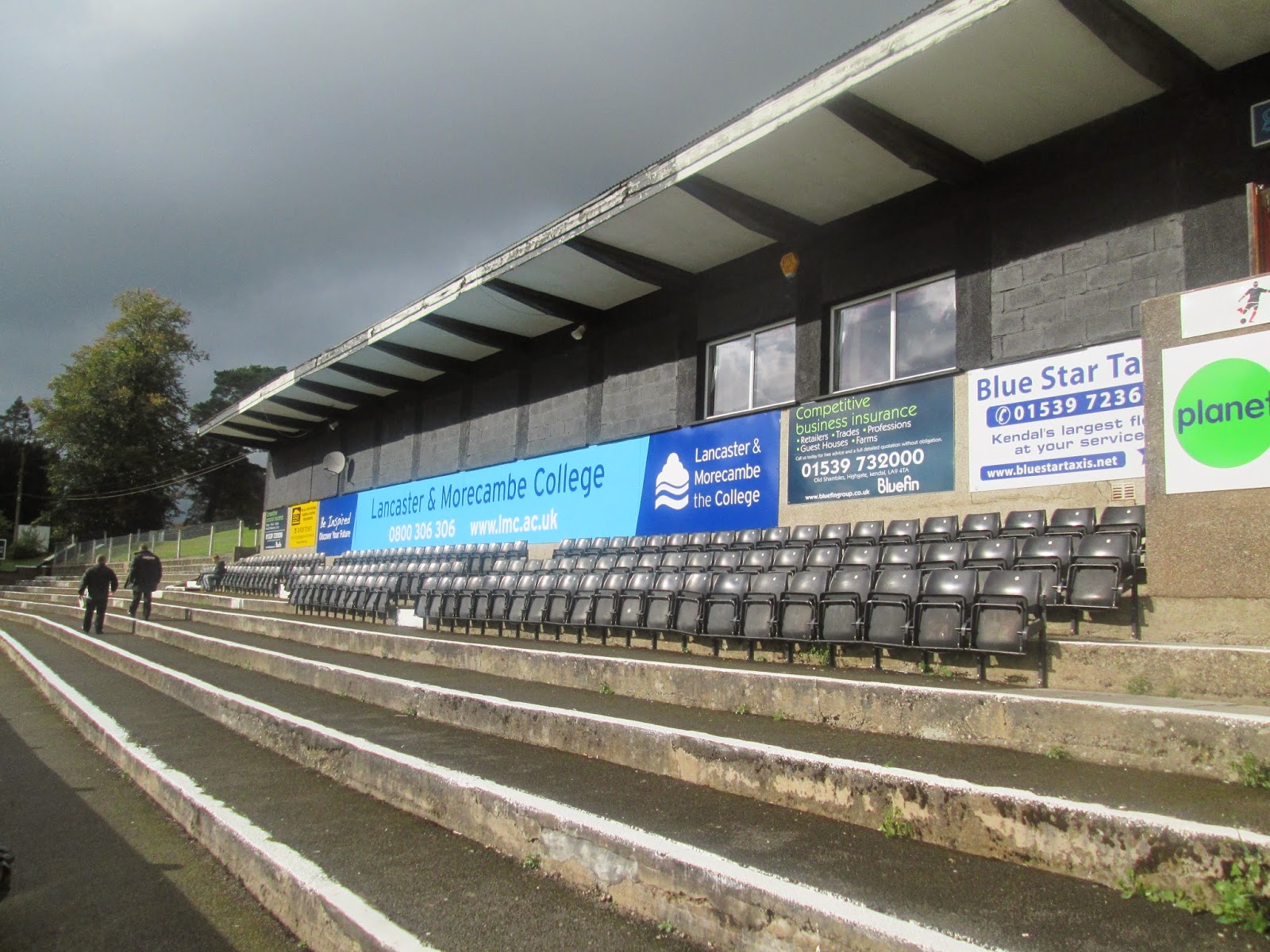 A late morning arrival at Oxenholme was followed by a decent stroll down the hill to the town of Kendal. The Windermere branch line offers a different option and there are also buses connecting Oxenholme with Kendal. Our first point of call was to be The Miles Thompson (Wetherspoons) where an early lunch was washed down with Lakeland Gold (4.4%) from the Hawkshead Brewery. This refreshing, well hopped, fruity and bitter golden ale has complex fruit flavours from the blending of English hop, First Gold, with the outrageously fruity American hop, Cascade. En route to have a look at Kendal Castle, we chanced upon Burgundy’s Wine Bar and Brewhouse. This venue also houses a microbrewery (Kendal Brewery). The quirky bar alone is in itself worth a visit. The impressive range of ales is complimented by a selection of bottled beers from across the continent. This Pieman delighted in Dr Manning’s Red (5.7%) from the Kendal Brewery - a smooth and rich Red Windsor Ale that is full of flavour with just a hint of coffee. 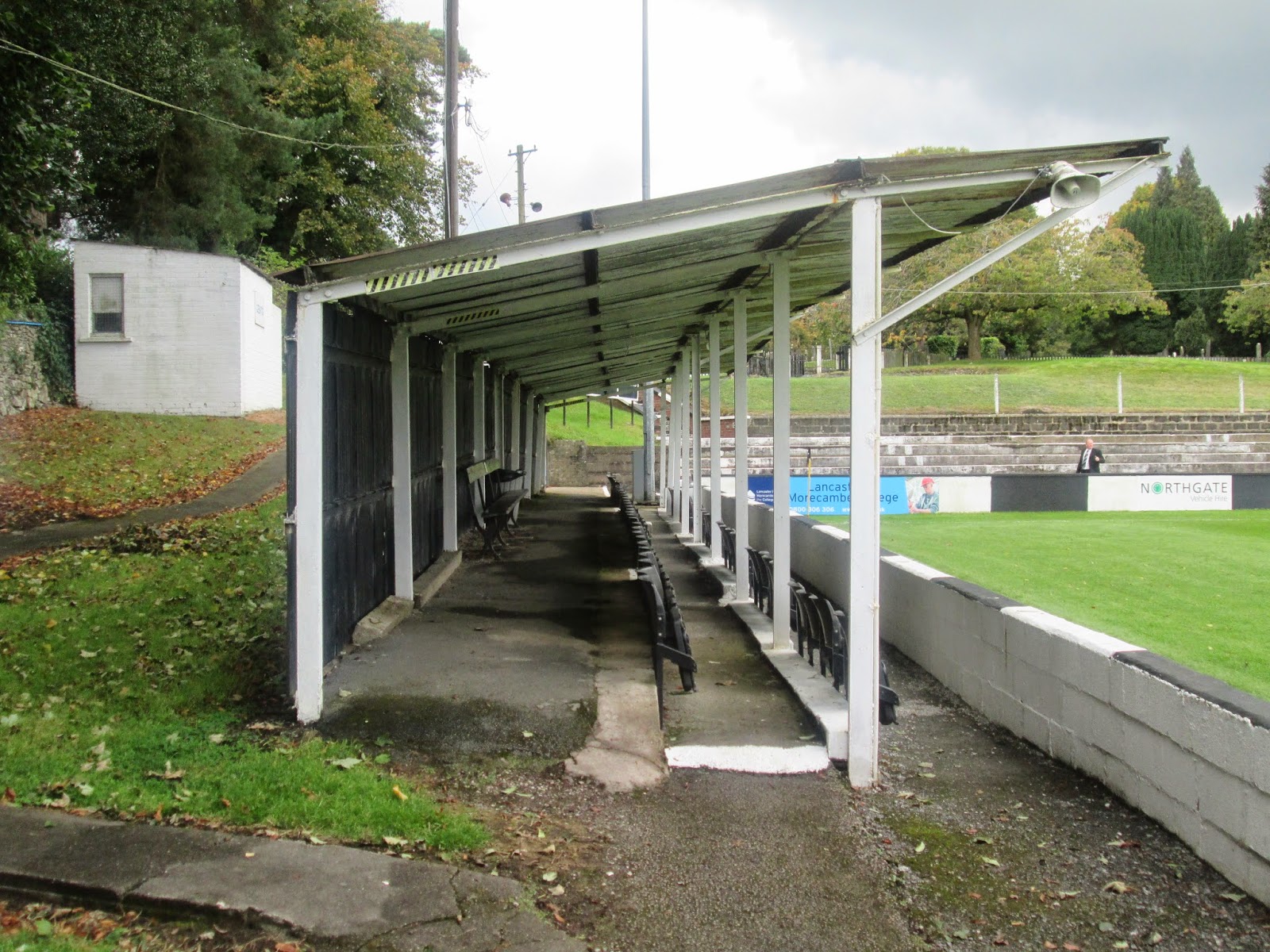 It was a steep climb up to Kendal Castle but worth it to see the ruins of what must have been a very impressive structure in its day. The views from this location, of Kendal and the surrounding area, are spectacular. From the castle it is a relatively short walk to the football ground following a couple of well worn footpaths along the side of graveyards. On arrival at the ground with about 45 minutes to go before the match, we were able to take some photographs and chat to some of the club officials, all of whom were friendly and welcoming. 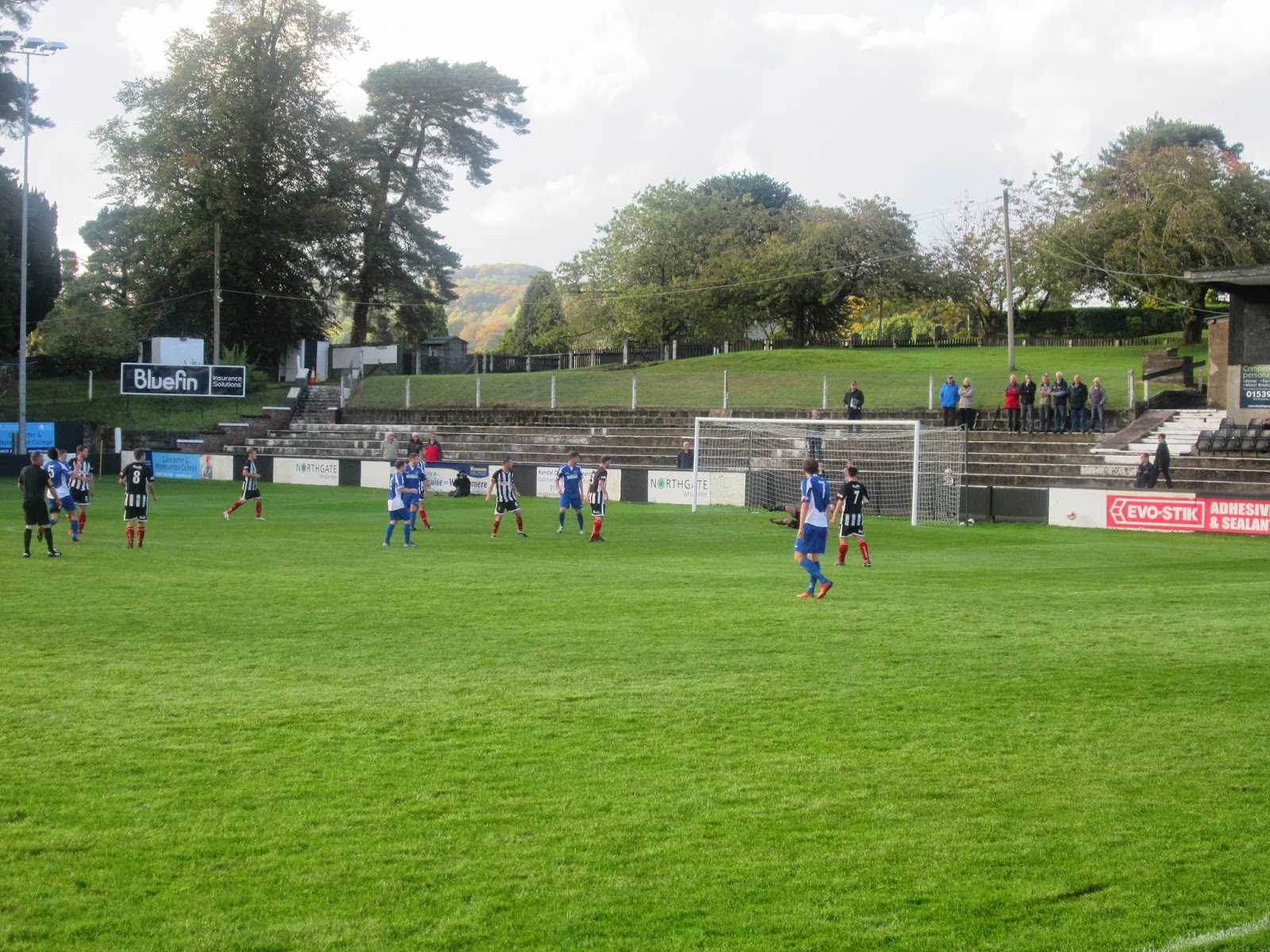 This venue is extremely well cared for with much of the surroundings sporting the club colours of black and white. There are three seated covered stands. Two along the main side and one behind the goal backing on to the clubhouse and bar/function room. The bar sells local real ales (more on that later). On the other side of the pitch, opposite the two covered stands, is another covered terraced area and some uncovered terracing. This ground offers many different vantage points, all of which provide a good take on the match action. 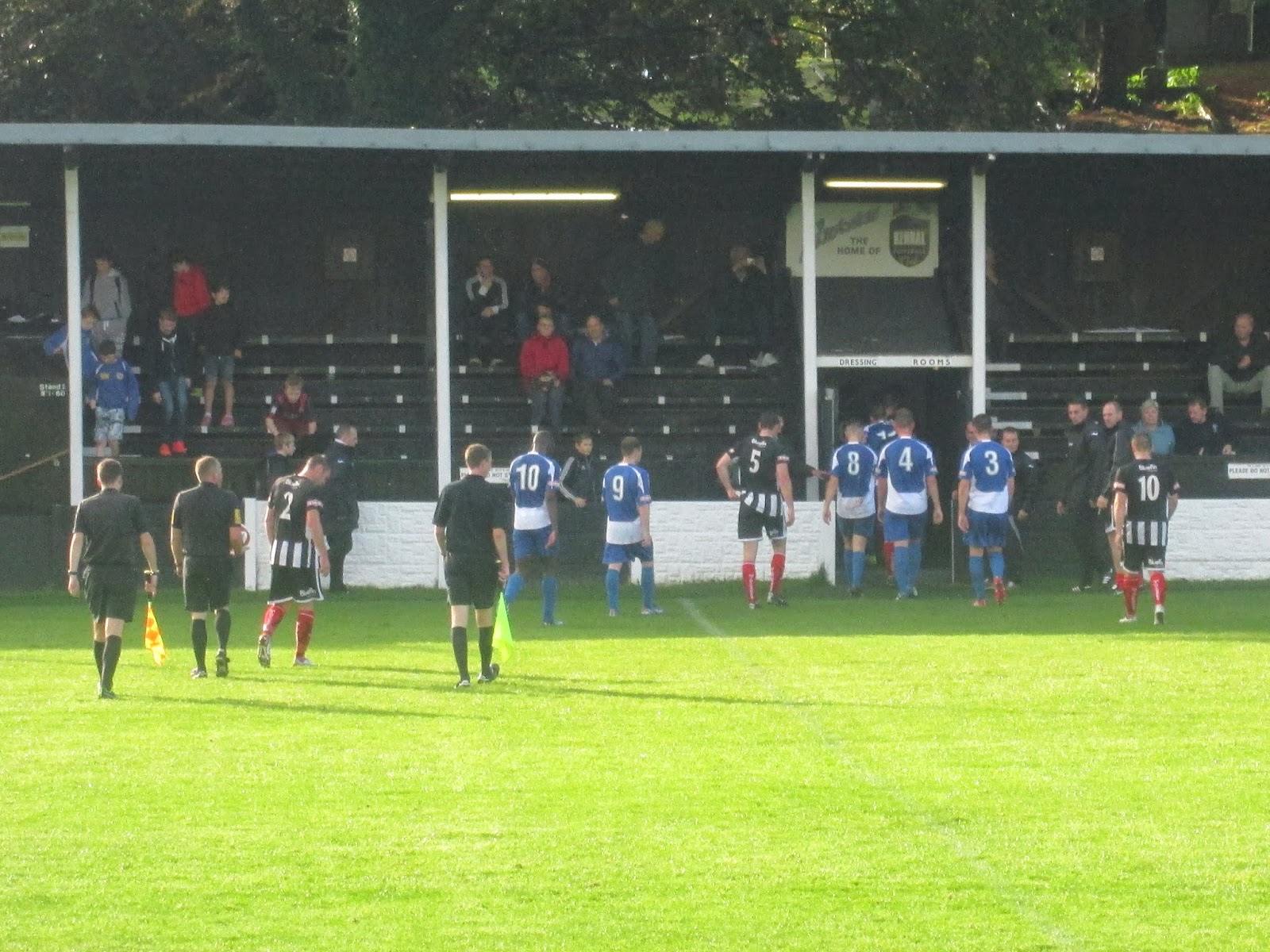 The match was very entertaining as the scoreline suggests. There were periods of dominance by both sides and the drama continued right to the end with a flurry of late goals. The match was played in good spirit by both sides and as a neutral I certainly felt I had had value for money. I would recommend this venue to anyone interested in classic stadiums and you would be sure to receive a friendly welcome. Hot food (Pie, Peas, Gravy an option) is also available pitchside and the function area upstairs also caters for hungry fans. Before the match this Pieman enjoyed a pint of Old School (3.9%) from the Winster Valley Brewery, a full tasting pale ale with floral aromas on the finish. After the match a pint of Kendal Gold (4.3%) from the Kendal Brewery wrapped up a very pleasant afternoon. The club reduces the price of ales on matchdays in an attempt to attract support. The walk back to Oxenholme Station was interrupted by a brief excursion to the 'Wee Chippy' on Natland Road before catching the 18:26 back to Euston. The Stevenage team including 55 year old substitute goalkeeper Dave Beasant, was also on our train home! We arrived in London ten minutes early! 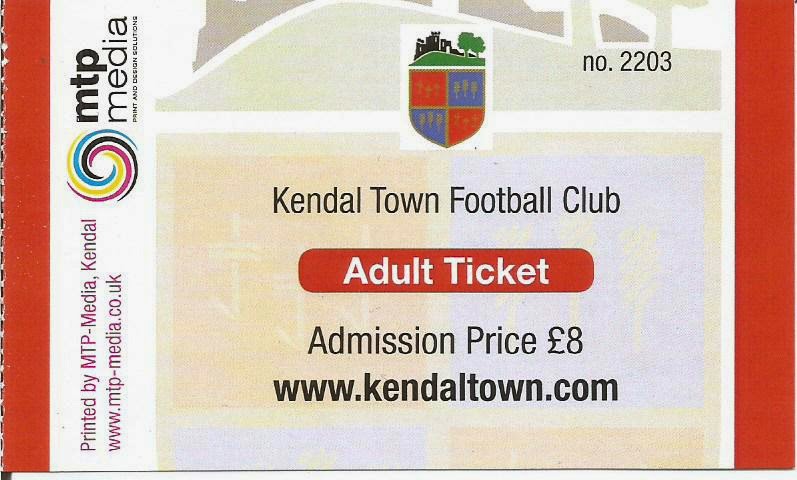 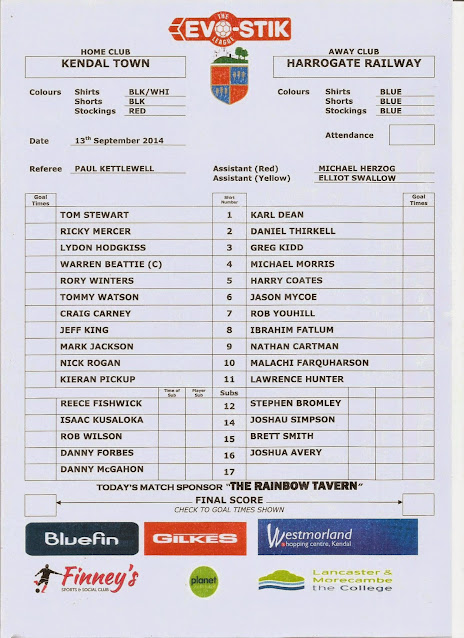 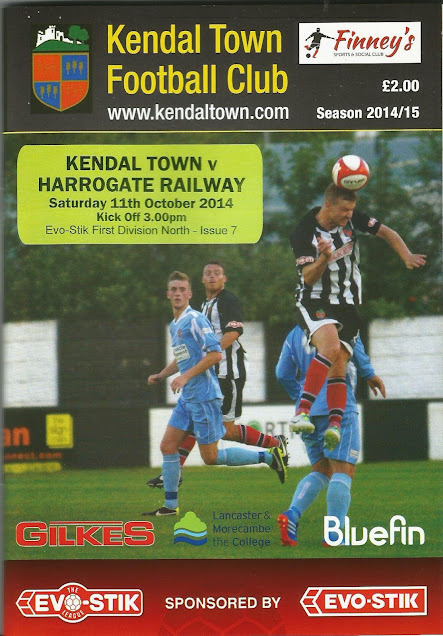