Sheerwater is a residential neighbourhood or small suburb of the Borough of Woking in Surrey. Its border is defined to the north by a gently winding part of the Basingstoke Canal and to the south by the South Western Main Line. Sheerwater was also spelt Sherewater until the early 20th century. It was since the Norman Conquest a high sandy heath and notable pond (small lake) of Pyrford. Sherewater Pond, on the borders of Pyrford and of Chertsey parishes, was an extensive mere on the high Bagshot Sand, drained and planted at the time of its enclosure, 29 September 1815. Sheerwater was designed as a new neighbourhood by the London County Council and approved by the local Urban District Council allowing nearly 1,300 homes to be built in the early 1950s and over 5,000 people to settle in the Borough. Notable former Sheerwater residents and pupils are Paul Weller, Bruce Foxton and Rick Buckler who together with other pupils of the then Sheerwater Comprehensive School formed The Jam. 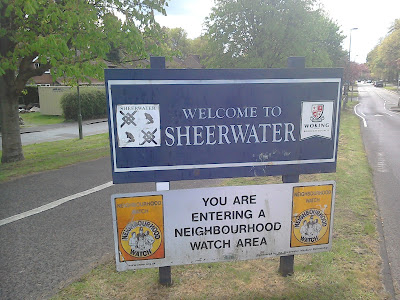 Sheerwater Football Club was founded in 1958, by John French, and they began life as members of the Woking & District League. After achieving Intermediate status, they joined the Surrey Intermediate League (Western) in 1967. The club was a founding member of the Home Counties League in 1978, which was renamed a year later to the Combined Counties League. Sheerwater play their home games at Sheerwater Recreation Ground. The Jam played some of their early gigs at the clubhouse, before releasing their breakthrough song "In The City". 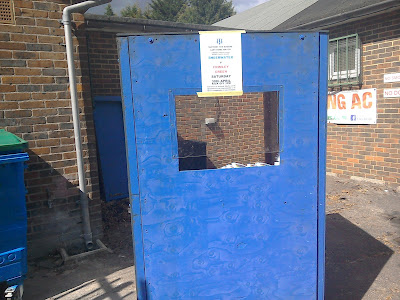 The bank holiday weekend offered an opportunity to visit a new venue. Sheerwater had been on my radar for a number of years but progress in getting there had always stalled. In the past this had been due to Sheerwater occasionally playing matches on a pitch outside the main arena. If I’m going to take the trouble to visit, I want the match to be at the main ground. 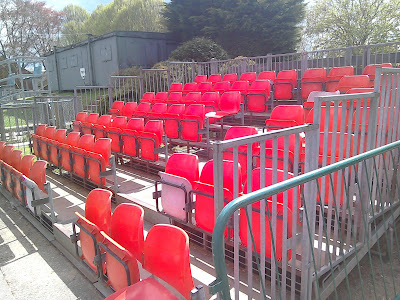 Some quick research helped me to ascertain that the cheapest travel option for me was to buy a day return from Hackney Downs. So via Liverpool Street, Bank and Waterloo, I was sped to Surrey. During my formative years, my aunt lived at Sheerwater and those occasional visits well over forty years ago were now being retraced as I left West Byfleet Station. The walk to the ground through the estate was very familiar. I stuck to following the roads through the estate but was later to realise that hugging the canal towpath brings you to the ground. 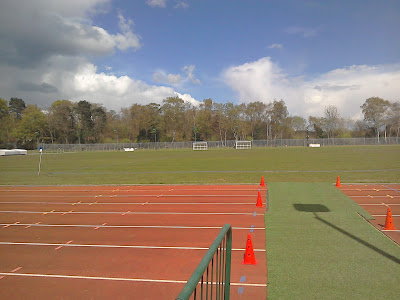 The main arena at the Recreation Ground is an athletics stadium and home to Woking AC. Due to the layout of this venue; it is not always possible to get an unrestricted view of proceedings. During the first half of the match I walked the full circuit of the stadium and there were a number of points where I had sped along so as not to dwell in an area where the view was obscured. That said, the primary function is clearly athletics and it would be harsh to criticise too much. 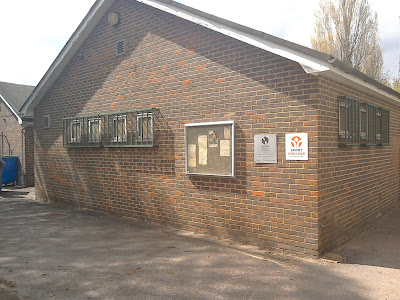 There are two seated stands along one side of the pitch. The covered stand containing three rows of seating backs onto the clubhouse facility block. This building contains changing rooms and the refreshment/hospitality room. The uncovered stand from where I watched the second half of the match, affords the best unhindered view. This stand is not as long as the covered stand but contains seven rows of seats. 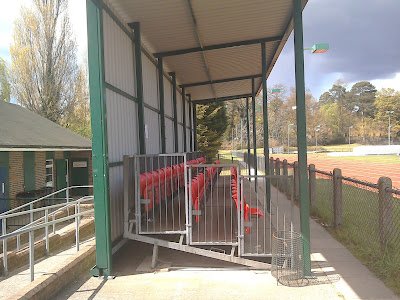 Sheerwater were looking to win their third successive match having beaten today’s visitors Frimley Green in their last outing. In fact, a win for the home side would take them ahead of their opponents on goal difference, with one match each left to play after this. The first half was a fairly tame affair but Sheerwater certainly stepped up a gear in the second period and were worthy of their 4-0 victory. A very pleasant stroll along the canal towpath enabled me to reach the station in plenty of time for the 17:27 fast service to Waterloo. 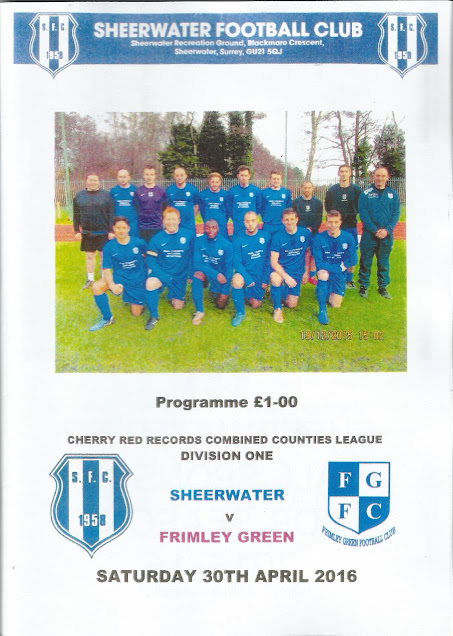