Cobh was originally called "Cove" ("The Cove of Cork"). It was renamed "Queenstown" in 1850 to commemorate a visit by Queen Victoria. This remained the town's name until the late 1920s, when it was renamed Cobh by the new authorities of the Irish Free State. Tourism is a large employer in Cobh. Large cruise liners visit Cobh each year, mainly during the summer months, although many of the tourists are transported out of Cobh by bus to other tourist destinations. In all, almost 100,000 cruise liner passengers and crew arrive in the town each year when their ships berth right in the centre of the town at Ireland's only dedicated cruise terminal. Tourist attractions are focused on the maritime and emigration legacy of the town and include the Queenstown Story at the Cobh Heritage Centre, Titanic Experience, Titanic Trail walking tour, Cobh Museum, Cobh Road Train, Spike Island tours and St Colman's Cathedral. The town has remained largely unchanged since RMS Titanic departed from Cork Harbour in 1912, with the streetscape and piers still much the same. Facing the town are Spike Island and Haulbowline Island. The latter is the headquarters of the Irish Naval Service, formerly a British naval base. 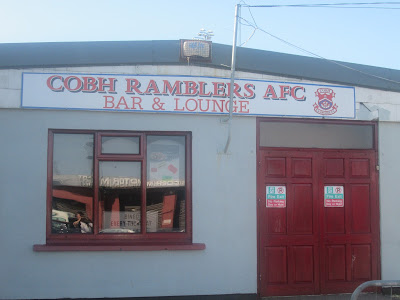 Cobh Ramblers Football Club was founded in 1922 and elected to the League of Ireland in 1985, after many successful years as a Munster Senior League side. The club was originally a field hockey club but until the British withdrawal from Ireland many club members played football with the soldiers who were stationed at Cobh, leading to the Ramblers' eventual re-formation as a football club. Home matches are played at St. Colman's Park. The club's colours are claret and blue. Cobh Ramblers most noted past player is former Irish international and Manchester United star Roy Keane, while Irish international Stephen Ireland is a product of the Youth System. Westlife singer Nicky Byrne, also a talented footballer who was on the books at Leeds United, had a spell with the club too. 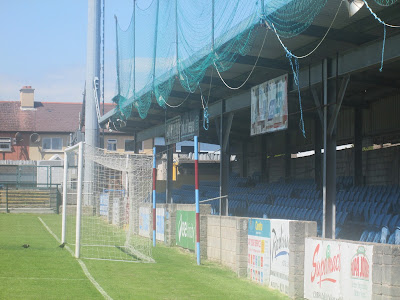 It is very easy to reach Cobh from the centre of Cork as there is a regular train service from Kent Station. There is also an interchange facility with a couple of local bus routes serving the station, including the airport service, but don’t expect the bus and trains to connect, my experience was quite the opposite. 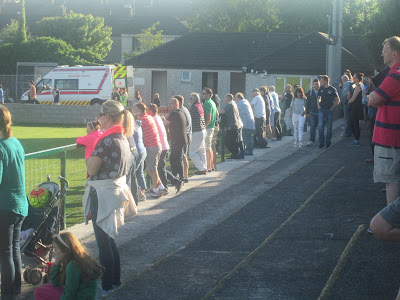 The journey takes around 25 minutes and provides passengers with a fine view as the train curves around the bay. On reaching Cobh you are faced with a very steep climb to reach the district where the football ground is located. The most direct route is via a series of steps, but there are road routes that also climb and are not quite as steep (though you may be forgiven for not thinking so). 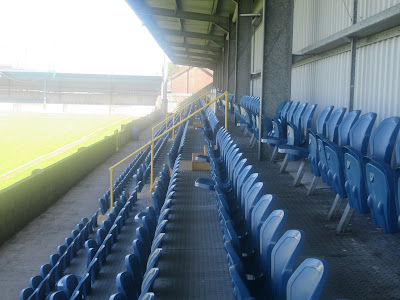 Once again an early opportunity was taken to access the ground and take some photographs. The club has played in the top flight of Irish football and the facilities reflect this. There is a covered seated stand running the full length of the pitch and another behind one of the goals. On the other side of the pitch where the dugouts are situated is an open terrace offering a good view. The remaining end of the ground contains the club offices, changing rooms and refreshment facilities including a function area with licenced bars. 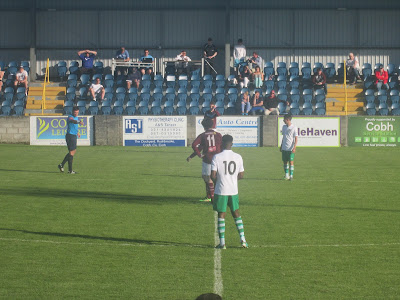 Having had a wander around Cobh, which is a very pleasant place to visit, it was time for a meal in one of the many eating establishments. This Pieman enjoyed his fish and chips with mushy peas. A slight detour to the previous route to the ground avoided the steps but still involved a very steep climb. With just over an hour before kick-off there was nobody outside the ground which was a complete contrast to the previous evening at Cork and there were very few people inside the ground. The main bar was being used for a birthday party but an adjacent area was opened and a pint of Beamish was subsequently enjoyed. 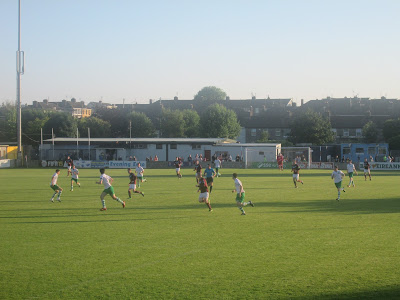 Fourth placed Cobh Ramblers were hosting bottom of the table Cabinteely (only 8 teams in this division). Despite being played in front of a sparse crowd, both teams put on a good display. The home side secured victory with two first half goals, a penalty breaking the deadlock. Cabinteely, managed by former Spurs man Eddie Gormley, played better than their league position suggests. The 19:15 kick-off facilitated catching the 21:30 service back to Cork, although missing my bus back to the hotel by minutes. I had expected this to be the outcome as timekeeping and connections are not at the fore in the region. 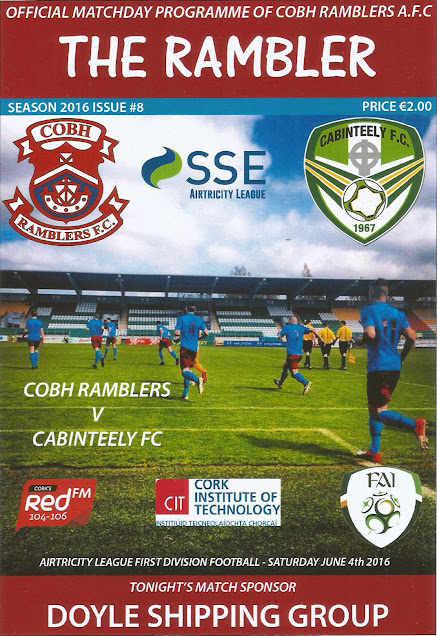