Harland & Wolff was formed in 1861 by Edward James Harland and Hamburg-born Gustav Wilhelm Wolff. In 1858 Harland, then general manager, bought the small shipyard on Queen's Island from his employer Robert Hickson. After buying Hickson's shipyard, Harland made his assistant Wolff a partner in the company. Belfast's skyline is still dominated today by Harland & Wolff's famous twin gantry cranes, Samson and Goliath, built in 1974 and 1969 respectively. In the First World War, Harland and Wolff built monitors and cruisers, including the 15-inch gun armed "large light cruiser" HMS Glorious. In 1918, the company opened a new shipyard on the eastern side of the Musgrave Channel, which was named the East Yard. This yard specialised in mass-produced ships of standard design developed in the First World War. 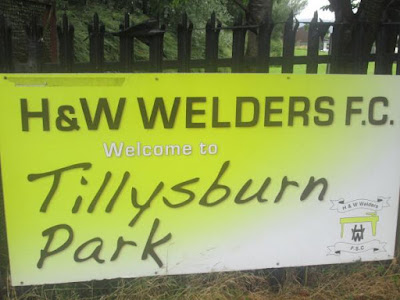 Harland and Wolff Welders FC was formed in 1965 after a collection in the Welding Department of H & W's Musgrave Yard, it was agreed to enter a team into the Saturday Morning League. The first fixture in the league was against Primrose Star on Saturday 25th September 1965. Progression was fairly swift and by 1967 the club had secured a first trophy by winning the league title. A permanent home for the club became reality when they moved to Tillysburn Park in 1983 and the cub has continued to progress since then winning the Intermediate Cup in 2003 and 2007, and the Smirnoff Cup on three occasions (1998, 2001 and 2002).  Championship league and cup doubles back to back in 2009 and 2010 were followed by promotion to the Championship for the 2010/11 season. The club's colours are yellow and black to display the link with Harland & Wolff shipyard and its iconic cranes. 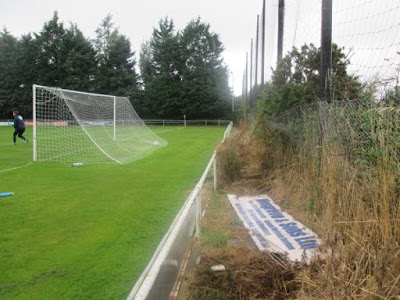 A morning flight from London Gatwick to Belfast International enabled this Pieman to reach the city centre by 11:30. To reach the centre it is convenient to use the express bus service direct from the airport (£10:50 return). As you exit the bus station via the shopping centre, immediately opposite is The Crown. This iconic public house exudes history and retains its private Victorian booths. It was here that I enjoyed a pint of Belfast Ale (4.5%) from the Whitewater Brewery. This aromatic russet ale is brewed with the addition of wheat and roasted barley. Rich fruitiness and a gentle hop flavour lead to its smooth succulent finish. 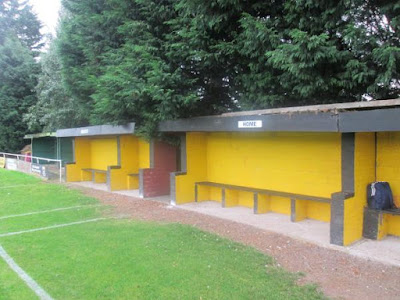 From the centre, Tillysburn Park can be reached easily by bus with services 3A and 28 stopping just a few yards along from the entrance to the ground. Once inside the ground, immediately to the left is the club building which houses the changing rooms, board room and refreshment facilities (snack bar and small seated bar area). Along one side of the pitch, straddling the half way line, is a covered seated stand. On the opposite side are the dugouts and a pair of old wooden covered areas. These structures appear to be relics of the club's past but were clearly functional on this rainy day. 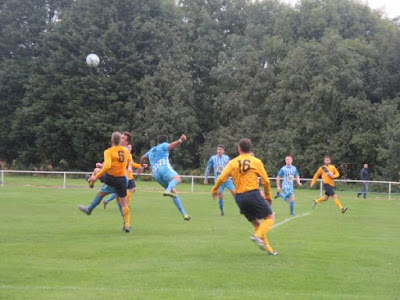 This Pieman spent the first half of the match in the stand. The Welders supporters are a friendly and welcoming bunch and particularly so when offering sweets, fruit and tea. The view from the stand is good and also allows sight of planes taking off from the nearby George Best City Airport. 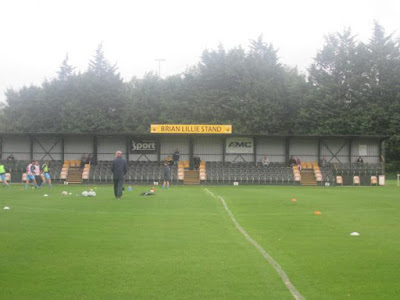 Visitors Warrenpoint Town were relegated from Northern Ireland's top flight last season. Leading 1-0 at the break, they doubled their lead ten minutes after the interval. The home side pulled a goal back later in the half but were denied a point from this match when they missed a penalty in the closing minutes. 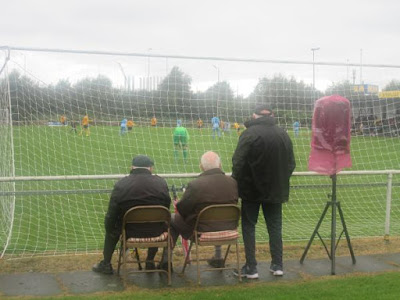 The 17:03 3A bus service was running a tad early but enabled this scribe to be back in the city centre by 17:15. The flight to Gatwick by contrast was slightly delayed but this did not impact too much on my onward journey via London.