West Ham is in the London Borough of Newham in London. In the west it is a post-industrial neighbourhood abutting the site of the London Olympic Park and in the east it is mostly residential, consisting of Victorian terraced housing interspersed with higher density post-war social housing. The area has been one of the most deprived in the country and as part of the New Deal for Communities programme it forms, with neighbouring Plaistow, a regeneration area. A settlement in the area named Ham is first recorded as Hamme in an Anglo-Saxon charter of 958 and then in the 1086 Domesday Book as Hame. The earliest recorded use of West Ham, as distinct from East Ham, is in 1186 as Westhamma. It is formed from Old English 'hamm' and means 'a dry area of land between rivers or marshland', referring to the location of the settlement within boundaries formed by the rivers Lea, Thames and Roding and their marshes. West Ham is located 6.1 miles east of Charing Cross. 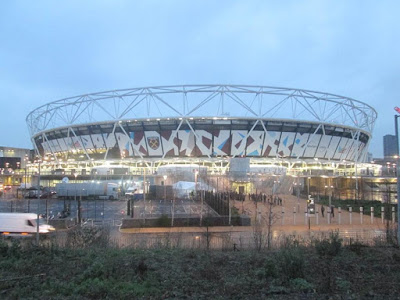 The club was founded in 1895 as Thames Ironworks and reformed in 1900 as West Ham United. The club has traditionally played in a claret and blue home strip with white shorts. West Ham competed in the Southern League and Western League before joining the Football League in 1919; they were promoted to the top flight in 1923, when they also played in the first FA Cup Final at Wembley. In 1940, the club won the inaugural Football League War Cup. West Ham have been winners of the FA Cup three times, in 1964, 1975, and 1980, and have also been runners-up twice, in 1923, and 2006. The club have reached two major European finals, winning the European Cup Winners' Cup in 1965 and finishing runners up in the same competition in 1976. West Ham also won the Intertoto Cup in 1999. They are one of eight clubs never to have fallen below the second tier of English football, spending 59 of 91 league seasons in the top flight, up to and including the 2016–17 season. The club's highest league position to date came in 1985–86 when they achieved third place in the then First Division. Three West Ham players were members of the 1966 World Cup final-winning England team: captain Bobby Moore and goalscorers Geoff Hurst and Martin Peters. Celebrity fans include Petch and Iron Maiden. 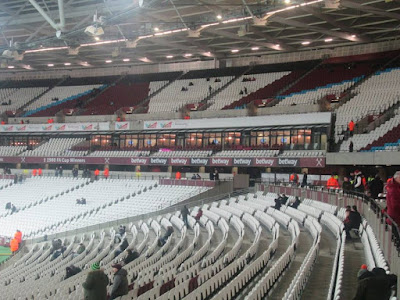 The team's supporters are famous for their rendition of the chorus of their team's anthem, "I'm Forever Blowing Bubbles" introduced to the club by former manager Charlie Paynter in the late 1920s. A Pears soap commercial featuring the curly haired child in the Millais' "Bubbles" was well known at the time. The child resembled a player, Billy J. "Bubbles" Murray, from local schoolboy team, Park School, where the headmaster was Cornelius Beal. Beal was known locally for his music and rhyme and wrote special words to the tune of "I'm Forever Blowing Bubbles" whenever any player was having a good game. “I'm forever blowing bubbles, Pretty bubbles in the air. They fly so high, nearly reach the sky,Then like my dreams they fade and die. Fortune's always hiding, I've looked everywhere ... I'm forever blowing bubbles, pretty bubbles in the air.” 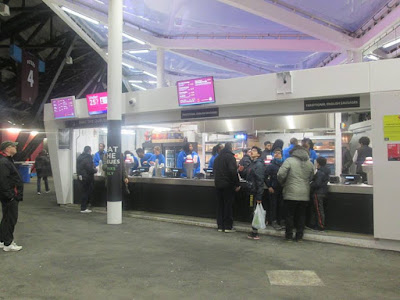 The London Stadium (originally known as the Olympic Stadium) is a stadium in Stratford, at Marshgate Lane in the Lower Lea Valley. It was constructed to serve as the home stadium for the 2012 Summer Olympics and Paralympics, hosting the track and field events and opening and closing ceremonies. It was subsequently renovated as a multi-purpose stadium, with its primary tenants being West Ham United Football Club and UK Athletics. However, the stadium operators arrange many other events for the stadium. The stadium site is on former industrial land between the River Lea (which re-joins the Navigation below Old Ford Lock), the City Mill River, and the Old Pudding Mill River; parts of the Bow Back Rivers. To make room for the stadium, the already partially obstructed Pudding Mill River, a short channel of the Lea which ran from the west side of the stadium south-eastwards across the stadium site, was filled in. 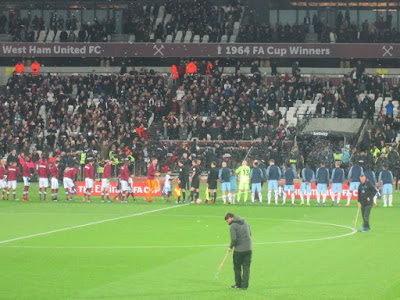 This Pieman had not intended making his initial visit to the London Stadium until May 2017 when Tottenham Hotspur visit in the Premier League. However, a colleague was unwell and unable to attend the match. I was able to offer my services as a late replacement and in doing so, recompleted my set of all current Premier League and Football League venues (“the 92”). I travelled to Stratford and completed my pre-match journey by going a further one stop east on the Docklands Light Railway (Canary Wharf branch) to Pudding Mill Lane. This station is a convenient alternative to the main Stratford station where you have the additional clash with Westfield shopping and is less than ten minutes walk from the London Stadium. 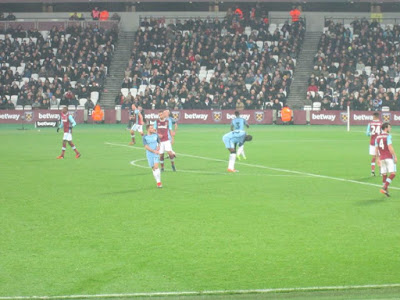 Having grabbed (just) a couple of daylight photographs outside the stadium and purchased match programmes, I was able to have a wander around the site. I was surprised to see that here was still construction work taking place around the Olympic Park but can see that there are a number of long term projects. Pudding Mill lane station being one such building site. I decided to get something to eat and swerved Westfield by opting for some decent fish and chips near Maryland station. It had started to rain by this time and sitting in this restaurant provided a good interlude. When returning to the stadium it was not possible to continue through the Westfield Centre as this route is blocked. Spectators are directed around the centre. Once inside the stadium I was able to take some more photographs and reflect on my only previous visit (2012) for a track and field evening at the Paralympics. 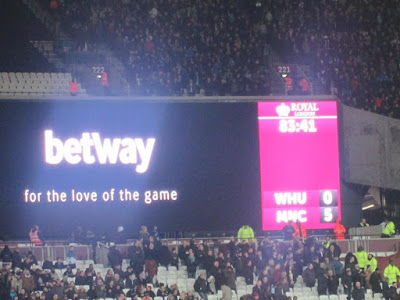 My seat for the match was in the lower tier along the side; tenth row near the half way line and the view was superb. History was being made as this was the first ever FA Cup-tie to be staged at this venue. City led 3-0 at the break; Yaya Toure starting the rout by firing a debatable penalty into the bottom left corner. Havard Nordtveit bundled Bacary Sagna's teasing cross into his own net, just 146 seconds before David Silva's composed tap-in. Shortly after the restart, Sergio Aguero cheekily diverted in Toure's shot and John Stones headed in his first Blues goal as the visitors comfortably saw the game out. I felt that Manchester City could have stepped up another gear if necessary. Health and Safety is clearly taken seriously at this venue and many of the home supporters willingly joined in with an emergency evacuation from late in the first half through to full time. My walk back to Stratford station was slower than previously experienced due to congestion but still only took around twenty minutes. An interesting if unexpected evening out in East London! 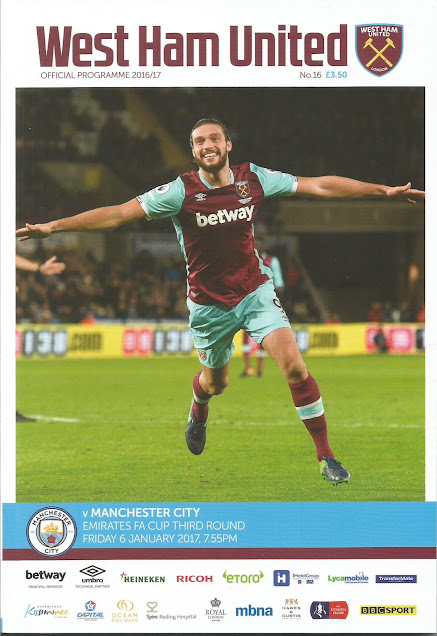