Leiston is a compact town close to the Suffolk Coast, between Aldeburgh and Southwold. Boasting a leisure centre with indoor Olympic size swimming pool & gym, a large supermarket and a variety of caravan and campsites. Leiston is also the closest town to the Sizewell Power station and Sizewell Beach. The town was actually an ancient Saxon settlement and you can see signs of this at Leiston Abbey ruins. Once a very wealthy Abbey, this fell into disrepair after the dissolution of the monasteries in the 16th century, but is now a stunningly beautiful ruin and home to a national school for young chamber music players. Leiston also offers the oldest purpose built cinema in Suffolk, which celebrated its centenary in 2014. The opening of a railway line in the 19th century brought a new kind of engineering prosperity to the town, and in 1862 Richard Garrett was employing over 600 workers at his Leiston Works engineering plant. Steam engines, munitions, shell making lathes and box making machines were all engineered here but it finally closed as a commercial business in 1980. Unfortunately, the railway line closed for passengers in 1966, so the nearest station (Liverpool Street line to Ipswich, then Lowestoft line from Ipswich) is a couple of miles away in Saxmundham. 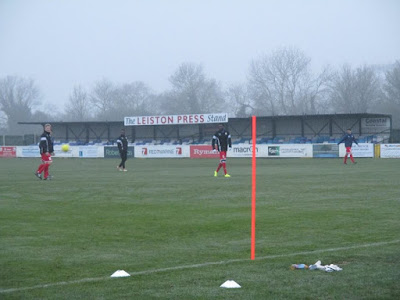 The football club was established in 1880 and was initially closely linked to the Richard Garrett Engineering Works, playing at the old Recreation Ground adjacent to Park Hill, with players changing in the White Horse Hotel or at the Works Hall. They reached the final of the Suffolk Senior Cup in 1892, 1897 and 1904, losing on each occasion, although they did win the Junior Cup in 1895. In 1894 they joined the North Suffolk League, which they played in until 1909. Between 1912 and 1914 they also played in the Ipswich & District League. After World War I the club was reformed as Leiston Works Athletic and rejoined the Ipswich & District League and the East Anglian League. In 1935 the club was reformed as Leiston. In 2001 the club stepped up to Division One of the Eastern Counties League and in 2004 was promoted to the Premier Division. The club reached the final of the Suffolk Premier Cup three times in succession between 2006 and 2008, but lost on each occasion; 3–2 after extra time against Lowestoft Town in 2006, 8–0 to Ipswich Town reserves in 2007, and on penalties to Needham Market in 2008. In the same season they beat Brentwood Town on penalties to win the East Anglian Cup. In the 2008–09 season the club reached the first round of the FA Cup for the first time after beating Conference club Lewes 3–1 in a replay. In the first round, the club was drawn at home to Conference North club Fleetwood Town. After drawing 0–0 in front of a record crowd of 1,250, they lost the replay 2–0. In 2010–11 Leiston won the Eastern Counties League Premier Division, earning promotion to Division One North of the Isthmian League. This was followed by winning the title and achieving back-to-back promotions, moving up to the Isthmian League Premier Division. 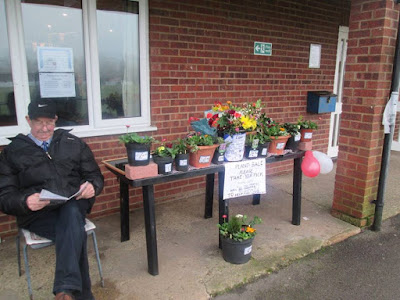 To reach Leiston by public transport can be something of a challenge. Therefore, I was particularly pleased to offered a lift to this match. The journey via the M25, A12 and A14 was straighforward but it had been foggy all morning and this was not lifting. Accordingly, visibility was not great. The nearerer we got to Leiston and kick off time, it was not unreasonable to question wether to match would be able to take place. 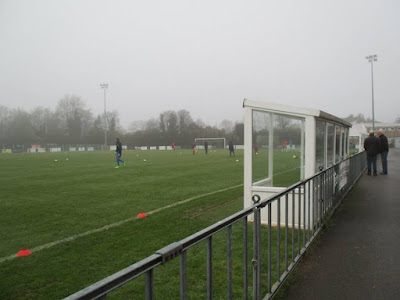 On arrival at Victory Road, we were immediately struck by the friendliness of Leiston and in particular the people running the football club. Everyone I spoke to had a kind word and it is clear to see that the football club is very much a focal point of this relatively small Suffolk community. 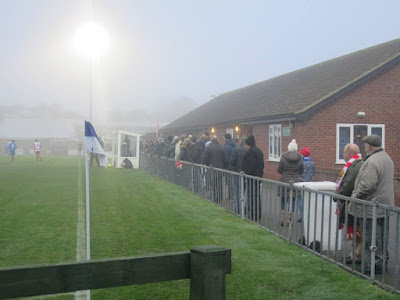 In terms of spectator facilities, there is a covered seated stand running along one side of the pitch. For some of the opposite side, there is a covered terrace and this met at the halfway point by the extensive clubhouse building. Which contains a decent bar and other refreshment facilities, an impressive boardroom and the changing rooms. A separate block contains a smart club shop and the administrative office. Behind one of the goals is a small covered terrace. Oddly you can make out the words 'no standing' on this structure. 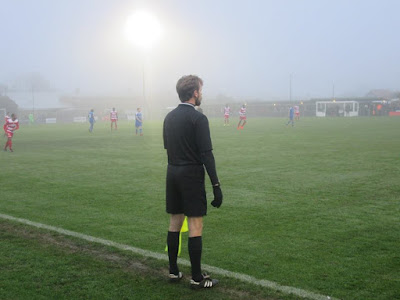 It was in the fine clubhouse that this Pieman revelled in a couple of pints of Jolly Holly (4.3%) from the St Austell Brewery - a lovely festive experience! After this pleasant interlude it was time for the match. Harlow Town, having made a good fist of it following their return to this division, started well and for quite a time took the game to their hosts. This endeavour was rewarded when they took the lead. Gradually Leiston came back into the match and by half time had taken the lead, the first goal having taken a wicked deflection. 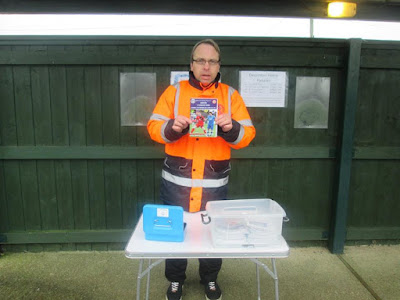 It was clear to see why Leiston are having are having such a good season and I was particularly impressed with their passing and movement. The final score of 5-2 perhaps underlines this, but Harlow Town will look back on a game where they did not always get the rub of the green. Amazingly for the latter stages of the game, the fog cleared which was good news for those driving home. It will be interesting to watch the progress of Leiston, a further promotion will be to the Conference (2nd tier) which would be remarkable. 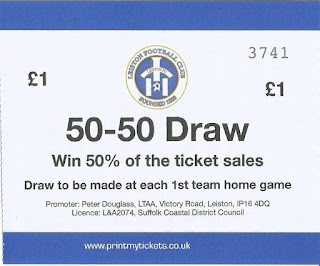 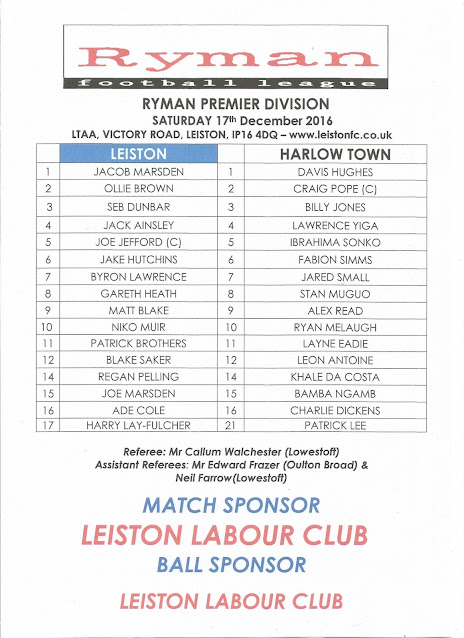 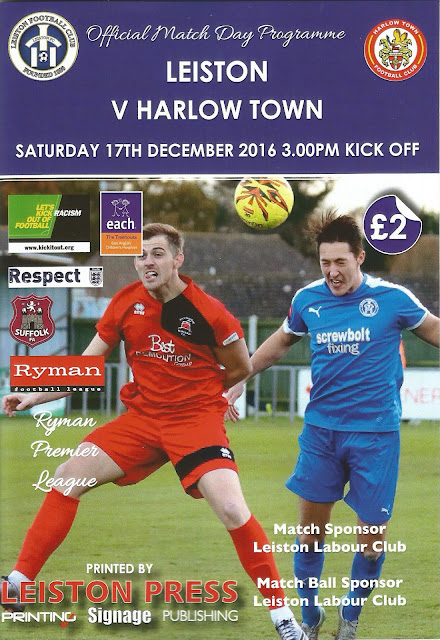