Mossley is a small town and civil parish in Tameside, Greater Manchester, England. The town is in the upper Tame Valley in the foothills of the Pennines, 3 miles southeast of Oldham and 8.9 miles east of Manchester. The historic counties of Lancashire, Cheshire and the West Riding of Yorkshire meet in Mossley and local government wards and church parishes correspond to their boundaries It is the only parished area of Tameside, having had a parish council since 1999. Mossley - alongside neighbouring Stalybridge and Uppermill in Saddleworth - helped launch the annual Whit Friday Band Contest, an internationally known brass band event. This came about when the three towns held unconnected brass band events on 6 June 1884. From 1918 to 1950 the town gave its name to the Mossley constituency which returned a Member of Parliament; for most of the period, the MP was Austin Hopkinson, who was notable for being elected as an Independent candidate. 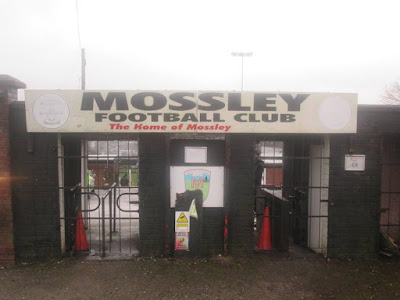 The football club was formed in 1903 as Park Villa and initially competed in local competition. After just one season the club's name was changed to Mossley Juniors. In 1909 they became Mossley AFC and moved to their present ground Seel Park in 1912 from their previous site at Luzley. The early years of Mossley AFC were spent in the Ashton & District League culminating in a superb season in 1914–15 when Mossley won the League, Manchester Junior Cup and the Lady Aitken Cup, progressing to the South East Lancashire League in 1915, the Manchester Amateur League in 1916, the Lancashire Combination in 1918 and then were founder members of the Cheshire County League in 1919, finishing runners up in the first season in both League and League Cup and returning to win the League Cup the following season beating Sandbach Ramblers in the final. After more than fifty years in the Cheshire League, the Lilywhites were elected to the Northern Premier League in 1972. During the late 1970s, Mossley grew into a formidable force in non-league football. They won successive League titles in 1978–79 and 1979–80 and finished runners-up in each of the next three seasons. With manager Bob Murphy at the helm the club also saw its greatest moment. May 1980 saw the Lilywhites at Wembley Stadium in the final of the FA Trophy where Mossley lost 2–1 in the final to Dagenham, their first defeat in 31 games. 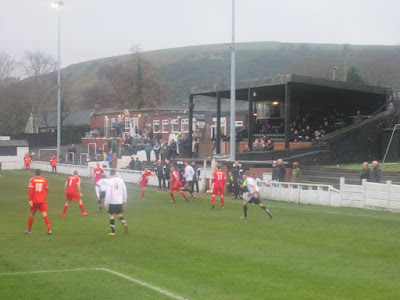 Having caught the 09:00 train from London Euston to Manchester Piccadilly and strolled across to Manchester Victoria, I was well placed for my onward journey to Mossley. The trains to Mossley are hourly, but This Pieman was inspired to catch an alternative service to Stalybridge (one station before Mossley) in order to visit the splendid buffet bar on the eastbound platform. I had ventured here previously some years back and was keen to repeat the experience as the place is a shrine to railway memorabilia, real ale and (although not eating) some fantastic food. It was rather busy but the service was excellent and I was able to enjoy a pint of Hopton (4.4% £2:90) from the Thornbridge brewery. 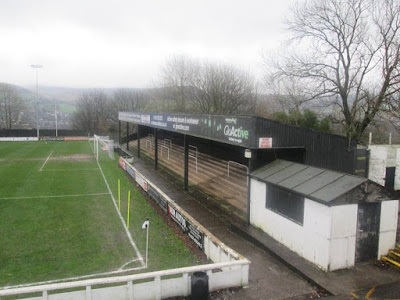 After this brief interlude, I was able to catch the next train to Mossley and five minutes later I was walking to the ground. Seel Park is reported as being less than half a mile from the railway station and I agree with this. However, what I had not expected and was not prepared for, was the very steep climb up to the ground. My efforts were rewarded when I eventually spotted the floodlights. By this time I was on level ground, which in this vicinity is at a premium. 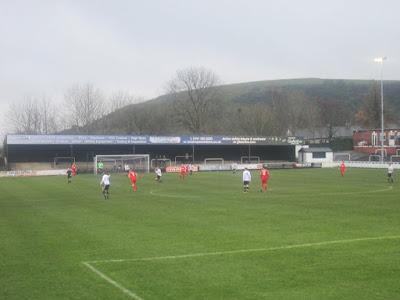 Seel Park is one of those traditional type venues that make the groundhopping hobby so rewarding. There is a covered seated stand that straddles the half way line, a covered terrace directly opposite and a similar terrace behind one of the goals. The opposite end of the ground is uncovered, but is raised and like the other areas, affords a good view of the playing area. The location of the stadium is such that the surrounding Pennine hills provide a tremendous backdrop. On a gloomy overcast day, as it was for my visit the mist on the hills formed quite a picture but am glad it stayed on the hills! Having taken ground photographs and chatted to the friendly officials on the gate and selling match programmes, I adjourned to the clubhouse where the early Watford v Everton match was being shown on the big screen. It was here that I entered the festive mood and delighted in a pint of Rocking Rudolph (4.2% £3:00) from Hardy & Hanson. 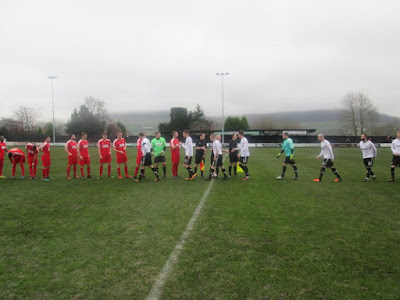 I have always enjoyed the occasion when I have visited clubs in the Northern Premier League and this match was no exception. However, I was not expecting the avalanche of goals that I was to witness. The home side scored five without reply in the first period. There were a further four goals after the break, but these were shared. At times Prescot Cables held their own in this encounter, but overall Mossley, in particular Mike Fish (4 goals in the first period) were far too strong. 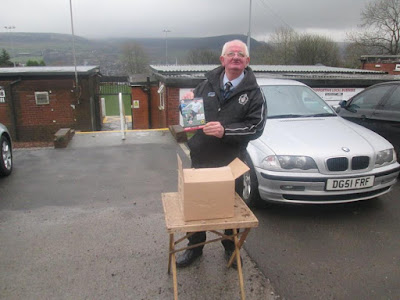 The walk back down to the station was a lot quicker than the earlier assent. The 17:41 train was delayed by 14 minutes but did go on to Bolton, where I was staying. I really enjoyed my trip to Seel Park and recommend a visit to anyone interested. The facilities, friendly welcome and magnificent setting all combine to offer a great experience. The abundance of goals was a bonus of course, as was the real ale in the clubhouse. When Mossley played at Wembley in 1980, this Pieman was there. Little did he know that decades later he would be visiting Mossley to watch a match at their ground. 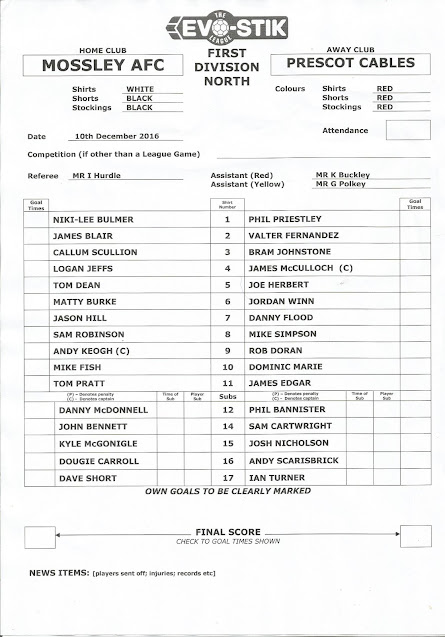 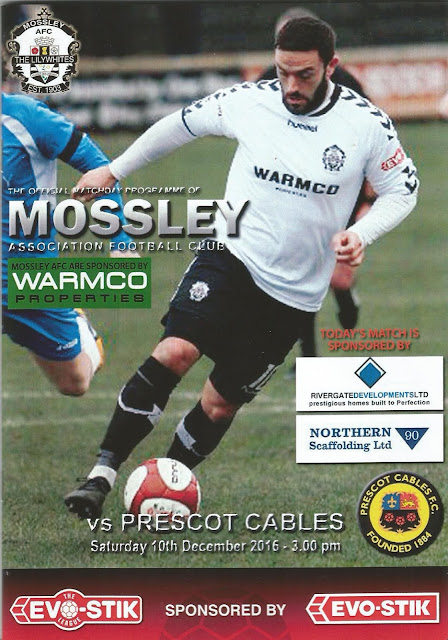