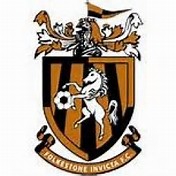 Folkestone is a port town on the English Channel, in Kent. The town lies on the southern edge of the North Downs at a valley between two cliffs. It was an important harbour and shipping port for most of the 19th and 20th century. The area of Folkestone has been occupied since at least the Mesolithic era. In 2010, worked flints were discovered below the remains of the Folkestone Roman Villa. The East Cliff area was excavated in 1924 and most recently from 2010 - 2011, which has produced artefacts from the Mesolithic period through to the Roman Era. On the East Cliff, an extensive Iron Age oppidum existed, which produced quern-stones on an almost industrial scale. These querns, or stones used for grinding cereals into flour, were traded for continental exports such as pottery and wine. A modest Roman style villa was constructed over the Iron Age settlement sometime during the first century AD, followed by a more luxurious one in about 200 AD. The villa was abandoned sometime during the third or fourth century for unknown reasons. The major landmark in Folkestone, apart from the harbour, is the Leas, the cliffs above the beach. A Martello Tower stands on the cliff above Copt Point. Built in 1806 as a defence against Napoleon, it has also been a Coast Guard lookout, a family home, a golf clubhouse and a Second World War Naval mine control post. It now houses a visitor centre. The Folkestone White Horse is carved on Cheriton Hill above the Channel Tunnel terminal. 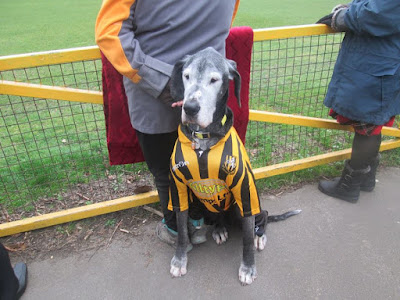 Folkestone Invicta Football Club, which was formed in 1936 and played in the East Kent Amateur League (now the Kent County League), took over use of the Cheriton Road ground in early 1991 after the demise of the old Folkestone club who had enjoyed a long history in the Southern League. Under manager Gary Staniforth, Invicta joined the Winstonlead Kent League and completed the Division Two league and cup double during the 1991-92 season, also winning the Kent Intermediate Shield that season. Invicta achieved senior status and joined Division One of the Kent League, making steady progress in its first two seasons at this level. 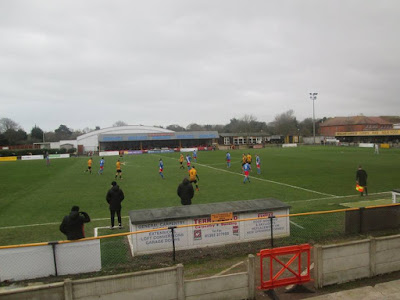 The nearest the club came to another trophy during these two seasons was when they lost the 1994 Kent Senior Trophy Final. The club continued to make good progress in 1998-99 as Southern League football returned to Folkestone. Invicta finished third in the Southern League Southern Division behind champions Havant & Waterlooville and runners up Margate, with the promotion race going to the final day of the season. Invicta also reached the final of the 1999 Kent Senior Cup The club also made its mark in the FA Trophy by beating Conference club Hayes to reach the Third Round before going out 8-4 in an incredible tie away to three-times winners Woking. The 2003-04 season was more successful for Invicta as the club finished fifth in the Eastern Division to win promotion via the re-structuring of the non-league game. The club switched from the Southern League to the Isthmian Premier League for the 2004-05. In 2016 Invicta won the Isthmian League Division One South Championship by 24 points and Manager Neil Cugley completed 1,000 matches as the club's manager. 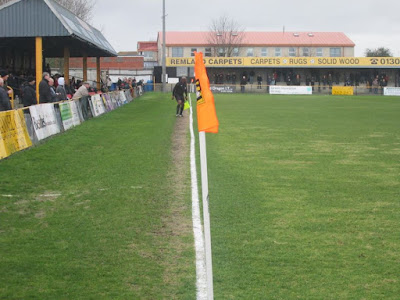 A direct train service from London Bridge saw this Pieman reach Folkestone Central in around an hour and a half. Folkestone West is a slightly nearer station to the football ground, but local resident and retired colleague Paul Denham suggested the former as it was close to a couple of hostelries in town that he wanted to show us! The Firkin Alehouse on Cheriton Place was our first calling point. Once the site of a hairdressers, this small micro pub is outstanding in quality and range of ales and ciders. There is no bar, you select your choice from the displayed list and your drink is delivered to you from the back room. Oakham Preacher (4.3%) was an inspired choice. The full bodied smooth delicate bitterness was a perfect start to the day in Folkestone. A few doors along from here is Chambers, another pub dispensing a selection of real ales. I enjoyed my pint of English Pale Ale (4.3%). This fine beer is brewed at Hythe by The Range Ales for Chambers. 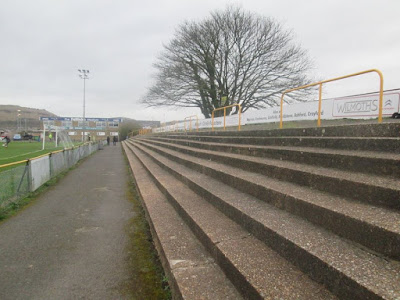 A swift walk to the ground enabled a further opportunity for real ale in the form of Hardy & Hansons bitter, straight from the barrel – superb. This was in Bar Invicta, one of two bars in the ground. The Cheriton Road ground is a fantastic throw back to a previous era. Three sides of the ground are terraced and sufficiently banked to afford a very good view from all points. One of the ends is fully covered and along part of the remaining side is a decent covered seated stand. Overall this is a fantastic stadium which oozes character. 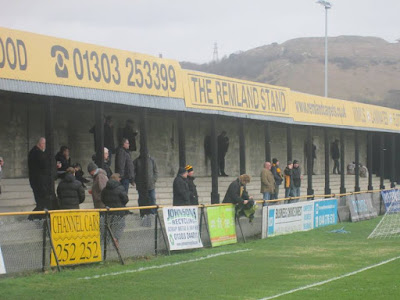 The two teams had met the previous Tuesday in the reverse fixture. Harlow Town led 2-0 until the 88th minute but two late goals meant that the Kent side enjoyed a share of the spoils. Therefore, the return fixture at Folkestone could be interesting! Played in gusty winds, it was the visitors that adapted best to the conditions and by half time had established a three goal lead. This was extended further after the break and although Invicta did grab a goal, this was merely a consolation. A late red card for a petulant kick reduced the home side to ten men. 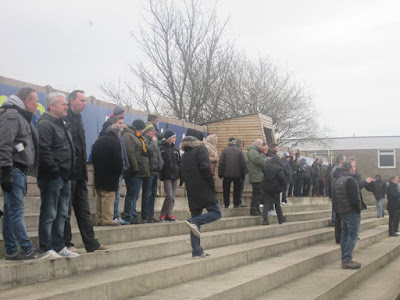 Cheriton Road is a joy to visit. A wonderful old fashioned stadium with extremely friendly people. Easy to get to and good beer options. The 17:11 service from Folkestone West was caught with ease and a couple of hours later, via London I was home in Cheshunt. 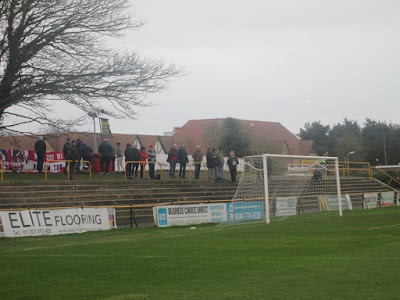 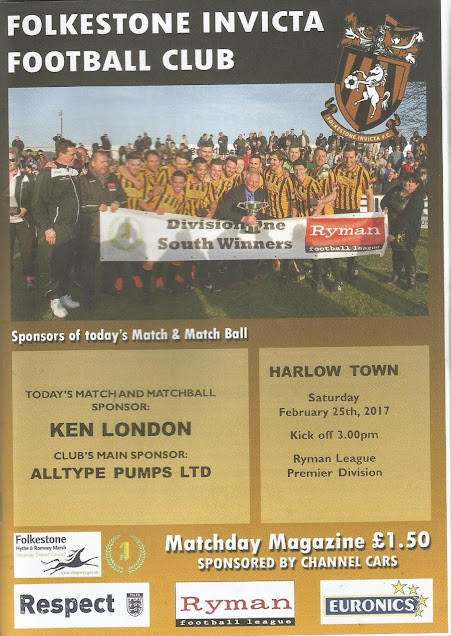