Yaxley is a village and civil parish in Cambridgeshire and lies approximately 4 miles south of Peterborough, just off the A15 road. Yaxley is situated within Huntingdonshire which is a non-metropolitan district of Cambridgeshire as well as being a historic county of England. The village is located near the Hampton township, and is approximately three miles north-east of junction 16 of the A1(M) at Norman Cross. Yaxley once belonged to the Abbey of Thorney, and at one time had a weekly market and an annual fair. The manor was the property of Colonel Proby in 1910. There was once a small mere on this spot called Yaxley Mere and navigable water between Yaxley, Holme and onwards to the sea at King's Lynn. The peat of the fen here used to be over 10 feet thick with occasional outcrops of Oxford clay, but there is no sand or gravel. 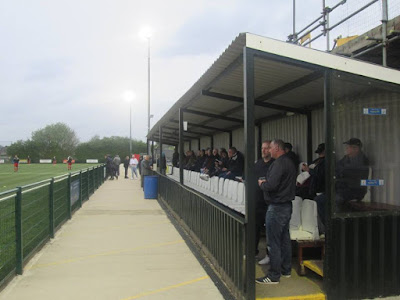 The current Yaxley FC was established in 1962 and joined Division Three South of the Peterborough & District League. In 1963 they were renamed Yaxley British Legion and in 1965 were promoted to Division Two. Although they were relegated back to Division Three South in 1967, they returned to Division Two after winning Division Three South in 1968–69. They won Division Two in 1970–71 and were promoted to Division One. The following year they dropped British Legion from their name. After finishing second in the league for four consecutive seasons, they were promoted to the Premier Division in 1975, the same season in which they won the Huntingdonshire Senior Cup for the first time. The following season they retained the Senior Cup. The club won the Premier Division in 1976–77 and again in 1983–84, a season in which they won the Hunts Senior Cup for the second successive season. In 1986 they were renamed Coalite Yaxley as part of a sponsorship deal. In 1988 they became founder members of Division One of the Eastern Counties League. A change of sponsor in 1990 saw the club renamed Clarksteel Yaxley. In 1992 the club were expelled from the ECL as their Middleton Road ground did not meet the league's requirements (it was in a park, had no stands and needed temporary dugouts to be put in place on matchdays). The club dropped into the Huntingdonshire League. In 1995 the club finally moved to Leading Drove and were accepted into Division One of the United Counties League and won the division at the second attempt, and were promoted to the Premier Division. 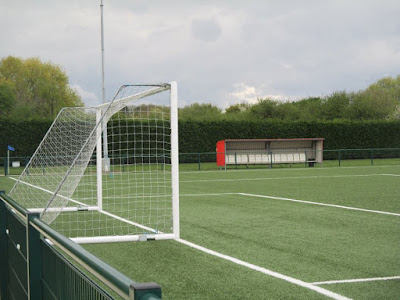 I was fortunate to be offered a lift to Leading Drove, the journey via the M11, A14 and A1(M) was swift and we arrived at Yaxley in good time to take some early photographs of the ground before venturing along the High Street in search of refreshment. A good Chinese take-away assisted in this respect. Yaxley is clearly a mix of old and new with a number of thatched roof dwellings interspersed with more recent buildings. 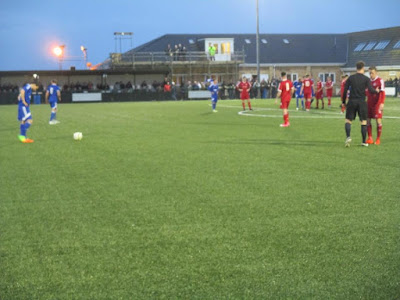 It is clear that the ground at Yaxley has undergone tremendous change in recent times, the most notable aspect of this being the installation of a very impressive artificial playing surface. There is a decent sized covered seated stand adjacent to the main club building, which houses the bar, tea bar and changing facilities. This building is L shaped and fits very neatly into the corner of the ground. There are two additional covered areas, much smaller but housing a single row of seats. These are situated along either side of the ground, diagonally opposite each other. 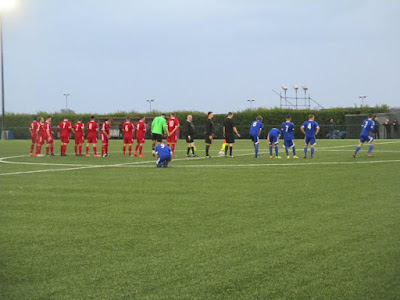 This Good Friday evening fixture probably benefited from not clashing with Peterborough United who played in the afternoon. Also being a local derby, the foresight of the clubs was rewarded by a bumper crowd of 250. Peterborough Sports FC are the newly crowned champions of the United Counties League and were given a guard of honour by their hosts as they entered the pitch before the match. Yaxley themselves are also having a good season, sitting in 3rd place and therefore this fixture promised to be an interesting encounter. 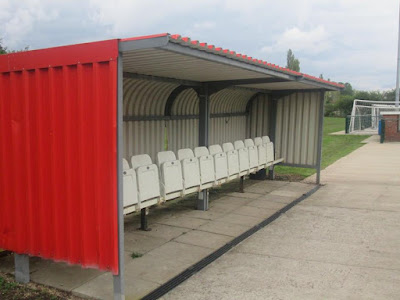 Yaxley led twice in the first period before being pegged back at 2-2 by the interval. An improving Peterborough Sports began to show why they have had such a good season and soon in the second period had taken the lead for the first time. As the match progressed both sides created chances and it was fitting that Yaxley grabbed a 3rd goal in the closing minutes to gain a well-deserved draw. The quality of football was a great advert for the United Counties League – a very enjoyable evening out. This Pieman was back home in Cheshunt for 11pm and as ever, grateful for the lift. 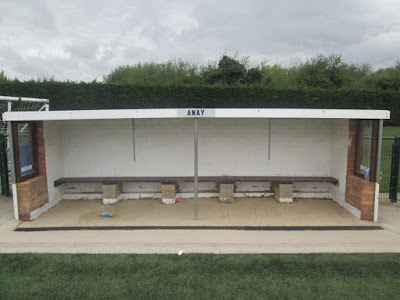 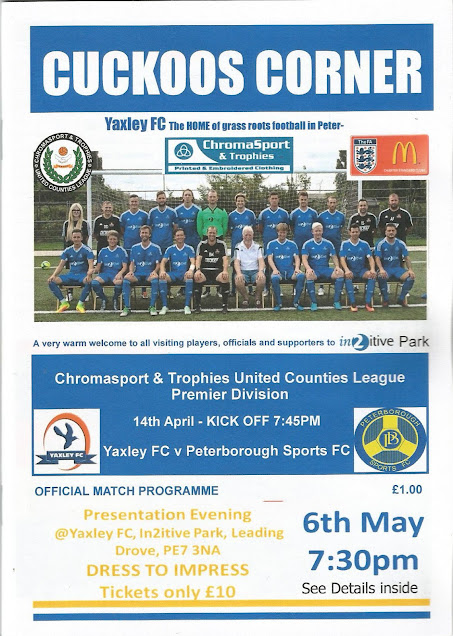