Eindhoven is a municipality and a city located in the province of Noord-Brabant in the south of the Netherlands, originally at the confluence of the Dommel and Gender brooks. The Gender was dammed off in the post-war years, but the Dommel still runs through the city. In 1232, when Duke Hendrik I of Brabant granted city rights to Endhoven, then a small town right on the confluence of the Dommel and Gender streams. The city's name translates literally as "End Yards", reflecting its position at the southern end of Woensel. At the time of granting of its charter, Eindhoven had approximately 170 houses enclosed by a rampart. Just outside of the city walls stood a small castle. The city was also granted the right to organize a weekly market and the farmers in nearby villages were obliged to come to Eindhoven to sell their produce. Another factor in its establishment was its location on the trade route from Holland to Liège. The industrial revolution of the Nineteenth Century provided a major growth impulse. Canals, roads and railroads were constructed. Eindhoven was connected to the major Zuid-Willemsvaart canal through the Eindhovens Kanaal branch in 1843 and was connected by rail to Tilburg, Venlo and Belgium between 1866 and 1870. Industrial activities initially centred around tobacco and textile and boomed with the rise of lighting and electronics giant Philips, which was founded as a light bulb manufacturing company in Eindhoven in 1891. 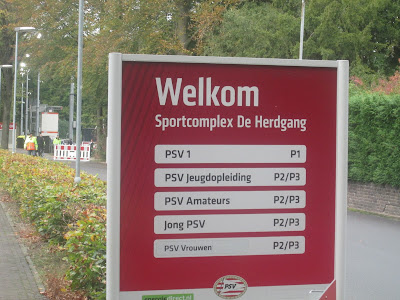 Sportcomplex de Herdgang is a football training facility in Eindhoven. It serves as the training ground and youth academy of PSV Eindhoven and also accommodates its amateur teams. De Herdgang was built in 1952. The word ‘herdgang’ originates from triangular squares that marked the end of dirt roads. These spots were used as locations where herds of sheep could graze, with ‘herd’ referring to a herd of animals and ‘gang’ being Dutch for ‘way’ or ‘process’. In April 2002, PSV started work on a renovation of the training facilities: a new indoor training hall, a fitness centre, offices and a canteen were added. The construction works were completed in April 2003. Several months later, the youth facilities were also renewed; an idea spearheaded by Guus Hiddink. The facility is located outside of the Eindhoven urban area in woodland surroundings. 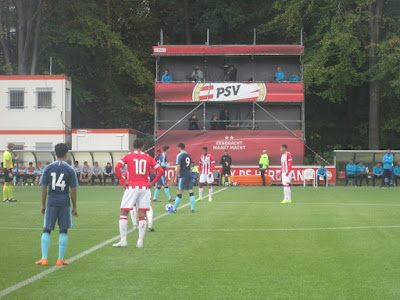 From the railway station it takes around half an hour to walk to Sportcomplex de Herdgang. The best directional advice I can offer is to continue past the Philips Stadion in a straight line, keeping the railway on your right, until the route takes you through a wooded area. Shortly afterwards the PSV complex is signposted on the right. 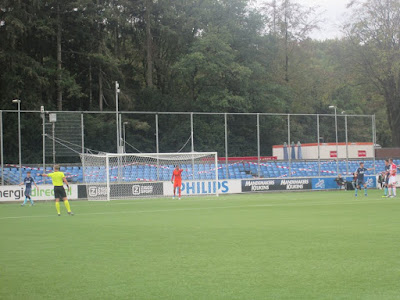 Clearly some decent consideration took place when the club designed and built these facilities. The rural woodland location is a fine setting for training I would think and is certainly so for watching football matches. There is considerable building work taking place at the moment, which will extend the main stand at both ends. 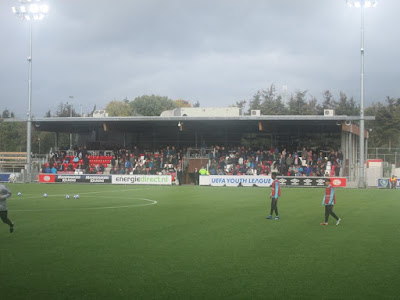 The tidy covered main stand is part of the main administration block including the changing rooms and an impressive restaurant and bar. There are three uncovered stands, two of which are opposite the main stand, either side of the halfway line. The other is behind one of the goals. For this match and presumably others in this competition, UEFA ruled that these stands could not be used. For Dutch second tier matches these stands are open to spectators.

Much like the main Champions League match that was to follow, Tottenham Hotspur dominated proceedings, but were still unable to beat their hosts. PSV led 2-0 at the break when for the majority of the time; Brandon Austin in the Spurs goal was untroubled. 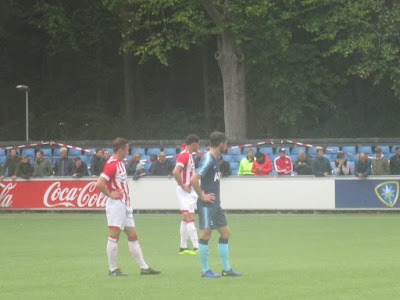 Despite missing a penalty, Spurs pulled a goal back courtesy of a wonder strike from Paris Maghoma. Another goal for the visitors from Jaden Brown in the dying moments of the match, meant they had now drawn all three of their group matches so far. 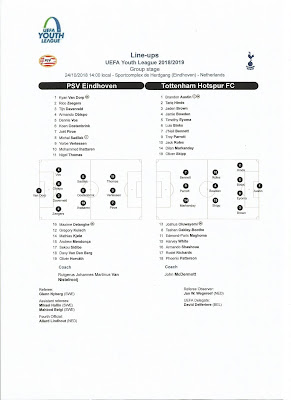 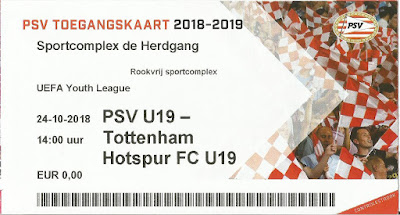