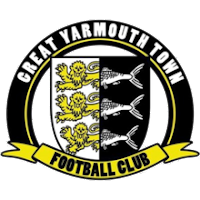 Great Yarmouth is a seaside resort and minster town in Norfolk, straddling the River Yare, some 20 miles east of Norwich. Its fishing industry, mainly for herring, fell steeply after the mid-20th century and has all but vanished. North Sea oil from the 1960s brought an oil rig supply industry that now services offshore natural gas rigs. More recent offshore wind power and other renewable energy have created further support services. Great Yarmouth has been a seaside resort since 1760 and a gateway from the Norfolk Broads to the North Sea. Tourism was boosted when a railway opened in 1844, which gave visitors easier, cheaper access and triggered some settlement. Wellington Pier opened in 1854 and Britannia Pier in 1858. In 1797, during the French Revolutionary Wars, the town was the main supply base for the North Sea Fleet. The fleet collected at the roadstead, from whence it sailed to the decisive Battle of Camperdown against the Dutch fleet. Great Yarmouth railway station is the terminus of the Wherry Lines from Norwich. Before the Beeching cuts the town had a number of railway stations and a direct link to London down the East Coast. 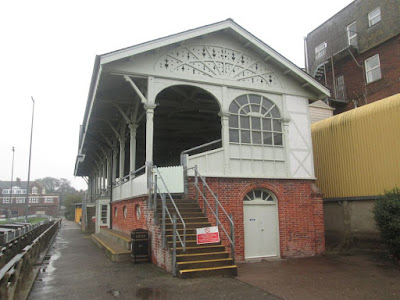 The Football club was established on 20 July 1897, taking most of their players from two local clubs, Yarmouth Fearnoughts and Yarmouth Royal Artillery, which between them, had won the Norfolk Senior Cup for the previous four years running. The new club were founder members of the Norfolk & Suffolk League in 1897 and in their first season won the Norfolk Senior Cup, beating Lynn Town 4–3 in a replay after a 0–0 draw in the first match. They won the cup again in 1901–02 and retained it in each of the next four seasons, each time defeating Lynn Town in the final. In 1935 the club was a founder member of the Eastern Counties League and won the League Cup in 1938. In the 1947–48 season the club reached the first round of the FA Cup for the first time, losing 4–1 at home to Shrewsbury Town in front of a crowd of 4,160. In 1951–52 the club won the East Anglian Cup and the following season saw them reach the FA Cup first round again, beating Guildford City 1–0 in a replay after a 2–2 draw. This was followed by a 4–1 defeat at home to Wrexham in front of an attendance of 6,963. The club reached the second round again the following season, beating Crystal Palace 1–0 before a record crowd of 8,944, before losing 5–2 at Barrow.
The journey by train was made from Cheshunt via Cambridge and Norwich. I used a discounted rail voucher resulting in a return fare of £5:00 (thanks again Martin). On arrival at Great Yarmouth, I headed straight for the Wellesley Recreation Ground (takes around twenty minutes) and was able to take some photographs of this delightful venue before heading off for some refreshment. Due to the combination of rain that was with us most of the day, Covid19 and it being off-season there were a lot of establishments not trading along the sea front. The option was taken therefore to head towards the centre. 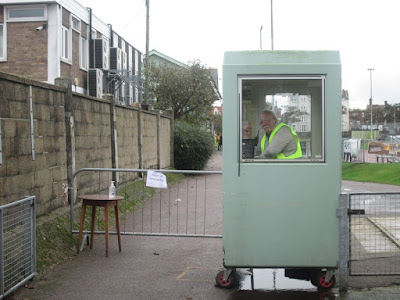 Some earlier research had planted the seed of visiting the Tombstone Saloon Bar and Brewery. This fine micro pub on George Street did not disappoint and was a welcome retreat. This Pieman delighted in a pint of Tombstone Arizona (3.9%) which fits the “amber, malty, hoppy with a touch of citrus” description. I then opted for a pint of Red at Night (4.5%) from the Star Wing Brewery at Redgrave in Suffolk. Another lovely beer and if I was not on football duty and pretending to be a journalist, I may have stayed longer at this fine establishment. Should I return to Great Yarmouth, I will certainly pay another visit! 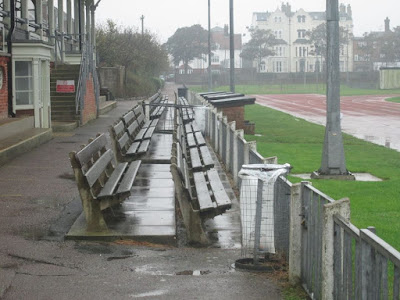 The recently installed NHS app on my phone was working better than anticipated. I had used this at the Tombstone Saloon Bar and again on admission to the football ground. There are pay entrance booths at both corners of ground along the main stand side, one of which serves those parking within the confines of the venue. The blue plaque affixed to the Victorian grandstand states that it is thought to be the oldest surviving in England. I took the opportunity to sit in the stand for a while before the match but like the long covered terrace running the full length of the pitch on the opposite side, there are many pillars restricting the view. Accordingly, my viewing of the match was from the front step of the terrace. A tea bar and a clubhouse are contained in separate structures along with a fairly modern looking toilet block. 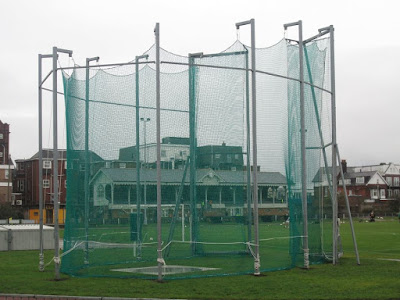 Although the ground also contains a running track and the usual athletics field event furniture, it is possible to get a good view of the match from the terrace side. This encounter with Framlingham Town ebbed and flowed throughout and was certainly good value for this neutral. The home side’s first goal was direct from a Declan McAvoy corner. This was cancelled out when Josh Tysoe levelled on 24 minutes. A triple substitution by the home side during the second half was followed by Fionn Goodwin-Wright (one of those subs) giving the home side the lead. Some fine goalkeeping from Elvijs Putnins ensured all three points for Great Yarmouth Town. I was particularly impressed with the award winning match programme. 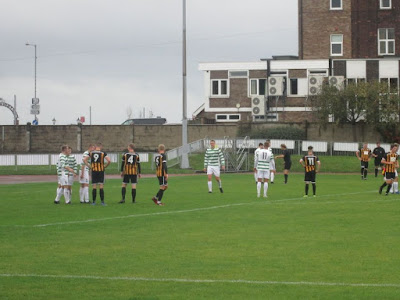 Having missed out on fish and chips before the match, it was good to remedy this en-route to the railway station. Large cod and chips – why not? “We are at the seaside!” The 17:17 train was ignored in favour of the 17:47. This had no impact on the subsequent journey as it would be the same connection to Cambridge. Once again, all trains ran to time and another long day out was enjoyed. My earlier concerns over the weather were unfounded, as there was never an issue with the playing surface at Great Yarmouth. 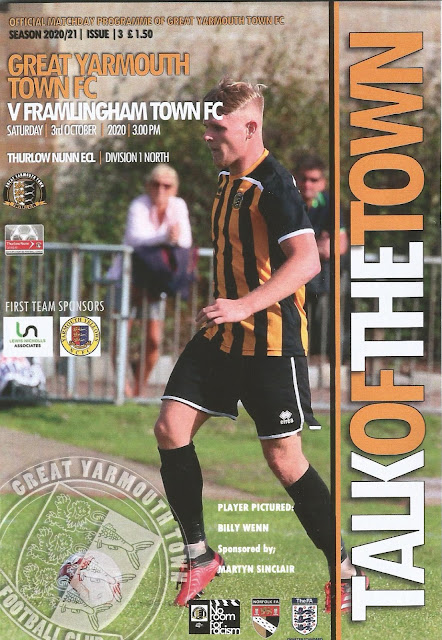