The name Gillingham is recorded in the Doomsday book. It is said to have been named after a warlord, Gyllingas—from the old English gyllan, meaning "to shout". He was a notable man in Kent history as he led his warriors into battle screaming and shouting. At the time of the Norman Conquest, Gillingham was a small hamlet. In medieval times the part of Gillingham known as Grange was a limb of the Cinque Ports and the maritime importance of the area continued until the late 1940s. Indeed, a large part of Chatham Dockyard lay within Gillingham. The Roman road now known as Watling Street passed through Gillingham; and until the opening of the Medway Towns bypass (the M2 motorway) in the mid-1960s the same route was followed by the traffic on the A2 to Dover. 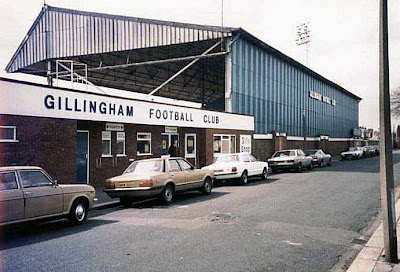 The local success of a junior football side, Chatham Excelsior F.C., encouraged a group of businessmen to meet with a view to creating a football club, which could compete in larger competitions. New Brompton F.C. was formed at the meeting, held on 18 May 1893. The founders also purchased the plot of land which later became Priestfield Stadium. In 1912 the directors passed a resolution to change the club's name to Gillingham FC, and the team played under this name throughout the 1912–13 season, although the change was not officially ratified by the shareholders until the following year. 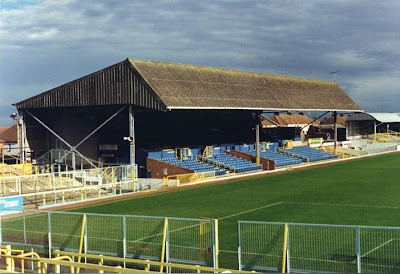 This Pieman ventured to Gillingham on a Friday evening at the end of the season for this testimonial match. The journey was made by train from London Victoria. The railway station is only around 5 minutes walk from the Priestfield Stadium. For a non-competitive match, this was good entertainment with Tottenham Hotspur beating their hosts by the odd goal in five. 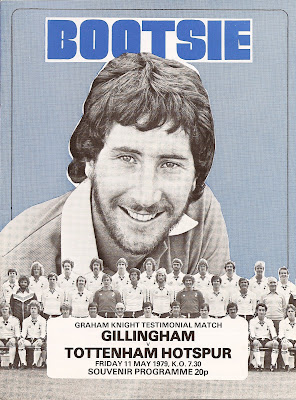 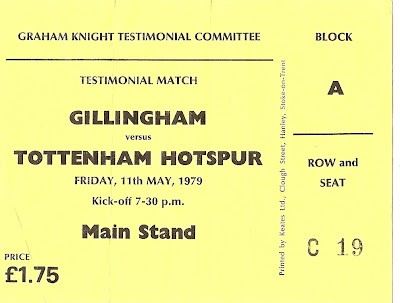 This game brings back memories for me as the first Gills game that I went to. I grew up in Essex and had just been stationed locally in the army. I went down to the Priestfield Stadium out of curiousity - and caught the bug. My Army days are long gone - and I live back in Essex, but I support the Gills through thick and less thick. I am a season ticket holder, both my sons are Gills fans, as will be my soon to be born grandson (he has no choice) - So it is nice to be reminded of the day that I wandered down from barracks and began to fall in love.