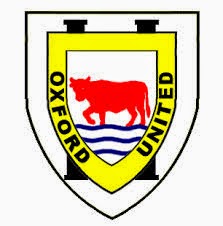 Oxford was first settled in Saxon times and was initially known as "Oxenaforda", meaning "Ford of the Oxen"; fords were more common than bridges at that time. Oxford was heavily damaged during the Norman Invasion of 1066. Following the conquest, the town was assigned to a governor, Robert D'Oyly, who ordered the construction of Oxford Castle to confirm Norman authority over the area. The castle has never been used for military purposes and its remains survive to this day. D'Oyly set up a monastic community in the castle consisting of a chapel and living quarters for monks (St George in the Castle). The community never grew large but it earned its place in history as one of the oldest places of formal education in Oxford. It was there that in 1139 Geoffrey of Monmouth wrote his History of the Kings of Britain, a compilation of Arthurian legends. The University of Oxford is first mentioned in 12th-century records. As the University took shape, tension between the hundreds of students living where and how they pleased led to a decree that all undergraduates would have to reside in approved halls. Of the hundreds of Aularian houses that sprang up across the city, only St Edmund Hall (c. 1225) remains. What put an end to the halls was the emergence of colleges. Oxford's earliest colleges were University College (1249), Balliol (1263) and Merton (1264). These colleges were established at a time when Europeans were starting to translate the writings of Greek philosophers. These writings challenged European ideology, inspiring scientific discoveries and advancements in the arts, as society began to see itself in a new way. These colleges at Oxford were supported by the Church in the hope of reconciling Greek philosophy and Christian theology. The relationship between "town and gown" has often been uneasy – as many as 93 students and townspeople were killed in the St Scholastica Day Riot of 1355.

Oxford United FC was formed as Headington in 1893, adding the suffix United in 1911 after merging with Headington Quarry. The club was founded by Rev. John Scott-Tucker, the vicar at Saint Andrew's Church in Headington, and a local doctor named Robert Hitchings. A football team was a way for the cricketers of Headington Cricket Club to maintain their fitness during the winter break. The first football match played was against Cowley Barracks. Headington had no regular home until 1913, when they were able to purchase Wootten's Field on London Road, but this was redeveloped in 1920, forcing the club to move. A permanent home was found in 1925, when they purchased the Manor Ground site on London Road. The facility was used as a cricket pitch in the summer and a football pitch in the winter. In 1899, six years after their formation, Headington United joined the Oxfordshire District League Second Division, where they competed until the outbreak of the First World War. A move into professional football was first considered during the 1948–49 season. Vic Couling, the president at the time, had applied for Headington to become a member of a new Second Division in the Southern League. Other teams that applied included Weymouth, Kettering Town and future league side Cambridge United. Although the plans were postponed, the First Division was going to be expanded by two clubs; Weymouth and Headington were elected. It was later discovered that Llanelli had just one vote fewer than Headington. Oxford played its first season in the Southern League in 1949, the same year they turned professional. In 1960, Headington United was renamed Oxford United, to give the club a higher profile.

This Pieman travelled to Oxford by coach for this pre-season friendly at the Manor Ground. The home side beat Tottenham Hotspur 2-1 on a hot Saturday afternoon. 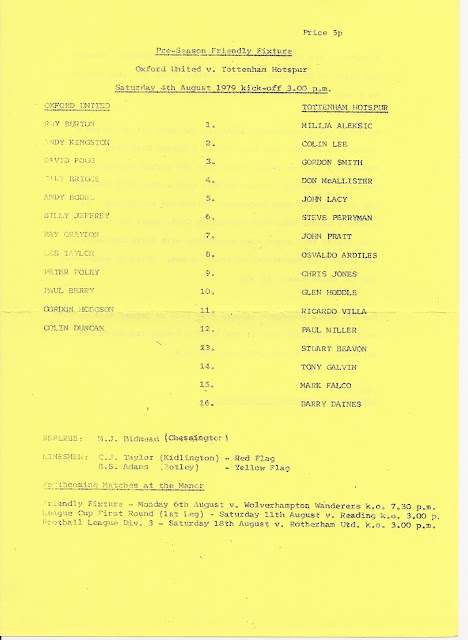 Subsequent visits to the Manor Ground