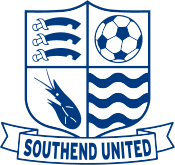 Southend-on-Sea is a seaside resort town and wider unitary authority area with borough status, in Essex, England, on the north side of the Thames estuary 40 miles (64 km) east of central London. It is bordered to the north by Rochford and to the west by Castle Point. It is home to the longest leisure pier in the world, Southend Pier. London Southend Airport is located 1.7 miles (2.8 km) north of the town centre. Originally the "south end" of the village of Prittlewell, Southend was originally home to a few poor fisherman huts and farms that lay at the southern extremity of Prittlewell Priory land. In the 1790s landowner Daniel Scratton sold off land either side of what was to become the High Street, and the Grand Hotel (now Royal Hotel) and Grove Terrace (now Royal Terrace) were completed by 1794, and stagecoaches from London made it accessible. Due to the bad transportation links between Southend and London, there was not rapid development during the Georgian Era like Brighton. It was the coming of the railways in the 19th Century and the visit of Princess Caroline that Southend's status of a Seaside resort grew. During the 19th century Southend's pier was first constructed and the Clifftown development built, attracting many tourists in the summer months to its seven miles of beaches and bathing in the sea. Good rail connections and proximity to London mean that much of the economy has been based on tourism, and that Southend has been a dormitory town for city workers ever since. Southend went into decline as a holiday destination from the 1960s, when holidays abroad became more affordable. There are nine railway stations on two lines within the borough which connect it to London.

Southend United F.C. was formed in 1906 and played in the Southern League until 1920, when they co-founded the Football League's new Third Division; they finished 17th in their first ever season. In 1921, the Third Division was regionalised with Southend United joining the southern section and here they remained until league re-structure in 1958. Southend came close to promotion twice when they finished 3rd in 1932 and 1950, the club's highest league positions. Southend United joined the new national Third Division in 1958, where they remained until 1966 when they suffered their first ever relegation, into the Fourth Division. The club had to wait six seasons until 1972 to experience the club's first ever promotion as runners-up behind Grimsby Town. In 1976 Southend suffered relegation again before taking another runners-up spot behind Watford in 1978.

This Pieman travelled by train from London Liverpool Street to Prittlewell station which is less than ten minutes walk from Roots Hall. Southend United forced a second replay in this League Cup 3rd Round tie with a battling performance against West Ham United. 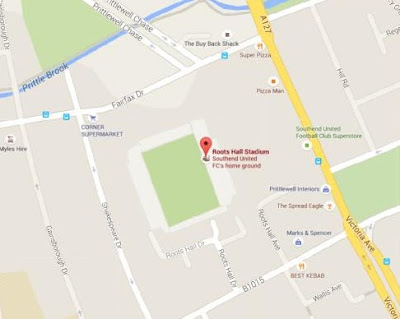 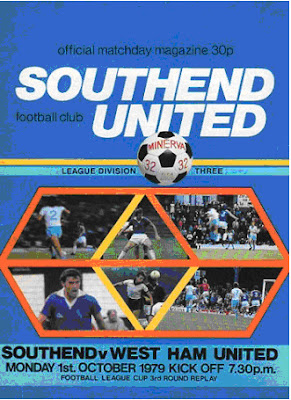 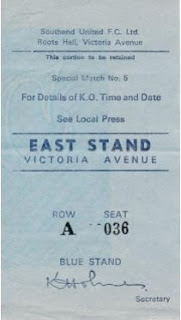