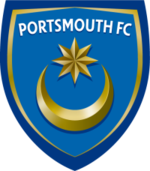 Portsmouth is the second largest city in the county of Hampshire. Portsmouth is notable for being the United Kingdom's only island city; it is mainly on Portsea Island and is situated 64 miles south west of London and 19 miles south east of Southampton. In the Doomsday Book there is no mention of Portsmouth. However, settlements that were later to form part of Portsmouth are listed. At this time it is estimated the Portsmouth area had a population not greater than two or three hundred. Whereas Portsea had a small church prior to 1166, Portsmouth's first real church was built in 1181, when a chapel dedicated to Thomas Becket was erected by Augustinian monks; it was run by the monks of Southwick Priory until the Reformation. The modern Portsmouth Anglican Cathedral is built on the original location of the chapel. In 1194 King Richard the Lionheart returned from being held captive in Austria, and set about summoning a fleet and an army to Portsmouth, which Richard had taken over from John of Gisors. On 2 May 1194 the King gave Portsmouth its first Royal Charter granting permission for the borough to hold a fifteen-day annual "Free Market Fair", weekly markets, to set up a local court to deal with minor matters, and exemption from paying the annual tax, with the money instead used for local matters. King Richard later went on to build a number of houses and a hall in Portsmouth. The hall is thought to have been at the current location of the Clarence Barracks (the area was previously known as Kingshall Green). In 1200 King John reaffirmed the rights and privileges awarded by King Richard. King John's desire to invade Normandy resulted in the establishment of Portsmouth as a permanent naval base, and soon afterward construction began on the first docks, and the Hospital of St Nicholas, which performed its duties as an almshouse and hospice. During the thirteenth century Portsmouth was commonly used by Henry III and Edward I as a base for attacks against France.

Portsmouth Football Club was founded in 1898 with John Brickwood, owner of the local Brickwoods Brewery, as chairman, and Frank Brettell as the club's first manager. A blue plaque on the wall of 12 High Street Portsmouth commemorates the founding on 5 April. The club joined the Southern League in 1899; with their first league match being played at Chatham Town on 2 September 1899 (a 1–0 victory), followed three days later by the first match at Fratton Park; a friendly against local rivals Southampton, which was won 2–0. The club won the FA Cup in 1939 and was champions of England twice, in 1949 and 1950. In November 1976, the club found it needed to raise £25,000 to pay off debts and so avoid bankruptcy. With players having to be sold to ease the club's financial situation and no money available for replacements, Portsmouth was forced to rely on an untried manager, Ian St John and inexperienced young players. Consequently, they were relegated to the Fourth Division in 1978.

This Pieman travelled from London Waterloo to Portsmouth & Southsea for this pre season friendly match. Although Fratton station is nearer to the ground, I walked from the town having enjoyed some refreshment there. An eventful evening saw Tottenham Hotspur secure a narrow 2-1 victory over Portsmouth. 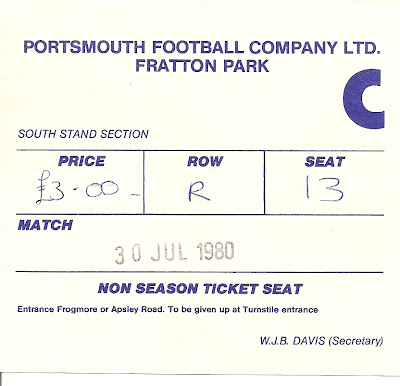