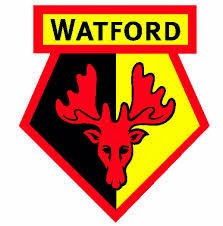 Watford is a town and borough in Hertfordshire, situated 17 miles northwest of central London and inside the circumference of the M25 motorway. The town developed from an Anglo-Saxon settlement between a ford of the River Colne and the crossroads of two ancient tracks. St Albans Abbey claimed rights to the manor of Cashio, which included Watford. The parish church of St Mary the Virgin was built in 1230 on the same site as an earlier Saxon church, along with stalls for a weekly market. The town grew modestly - assisted by travellers passing through to Berkhamsted Castle and the royal palace at Kings Langley, with the main developments being the 17th-century houses of Cassiobury and The Grove. Both the Grand Junction Canal in 1798, and the London and Birmingham Railway in 1837, allowed the town to grow faster, with paper-making mills, such as John Dickinson and Co. at Croxley, influencing the development of printing in the town which continues today. Watford was created as an urban district under the Local Government Act 1894, and became a municipal borough by grant of a charter in 1922.

Founded in 1881 as Watford Rovers, the club entered the FA Cup for the first time in 1886, and the Southern League a decade later. After finishing the 1914–15 season as Southern League champions under the management of Harry Kent, Watford joined the Football League in 1920. The club played at several grounds in its early history, before moving to a permanent location at Vicarage Road in 1922, where it remains to this day. Watford spent most of the following half century in the lower divisions of The Football League, changing colours and crest on multiple occasions. Lifelong Watford supporter Elton John became club chairman in 1976. The singer declared an ambition to take the team into the First Division, and when he appointed Graham Taylor as manager, the club was still in the Fourth Division.  Taylor achieved promotion in his first season; Watford won the Fourth Division title, recording the most wins, fewest defeats, most goals scored and fewest goals conceded of any side in the division. Promotion to the Second Division followed in 1978–79, and Ross Jenkins finished the season as the league's top scorer with 29 goals. Watford consolidated with 18th and 9th placed finishes over the following two seasons, and secured promotion to the First Division for the first time in 1981–82, finishing second behind rivals Luton Town.

This Pieman travelled by train from London Euston to Watford Junction. The walk to the ground from the station took around 25 minutes. Tottenham Hotspur won this first top flight encounter between the two sides with the only goal of the match.