Lewes is the county town of East Sussex, England and historically of all of Sussex. It is a civil parish and is the centre of the Lewes local government district. The settlement has a history as a bridging point and as a market town. Archaeological evidence points to prehistoric dwellers in the area. Scholars think that the Roman settlement of Mutuantonis was here, as quantities of artefacts have been discovered in the area. The Saxons built a castle, having first constructed its motte as a defensive point over the river; they gave the town its name. After the Norman invasion, William the Conqueror rewarded William de Warenne, 1st Earl of Surrey with the Rape of Lewes, a swathe of land along the River Ouse from the coast to the Surrey boundary. He built Lewes Castle on the Saxon site; and he and his wife, Gundred also founded the Priory of St Pancras, a Cluniac monastic house, in about 1081. In 1148 the town was granted a charter by King Stephen. The town became a port with docks along the Ouse River. The town was the site of the Battle of Lewes between the forces of Henry III and Simon de Monfort in the Second Barons’ War in 1264, at the end of which de Monfort's forces were victorious. The battle took place in fields now just west of Landport. At the time of the Marian Persecutions of 1555–1557, Lewes was the site of the execution of seventeen Protestant martyrs, who were burned at the stake in front of the Star Inn. This structure is now the Town Hall. Through the seventeenth and eighteenth centuries, Lewes developed as the county town of East Sussex, expanding beyond the line of the town wall. It was an active port and developed related iron, brewing and ship building industries. In 1846 the town became a railway junction, with lines constructed from the north, south and east to two railway stations. The development of Newhaven ended Lewes's period as a major port. During the Crimean War, some 300 Finns serving in the Russian army captured at Bomarsund were imprisoned at Lewes. Lewes became a borough in 1881. 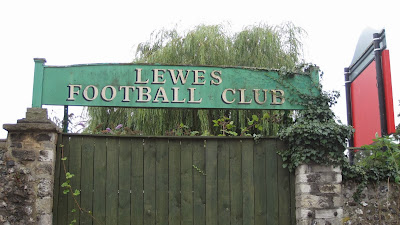 Lewes Football Club was formed at a meeting at a local pub (The Royal Oak) in 1885 and initially wore green shirts designed to evoke the surrounding South Downs. The present red and black kit was adopted in 1893. Prior to becoming home to Lewes FC, the Dripping Pan belonged to Lewes Priory Cricket Club. Having won the championship of the Mid Sussex League twice before World War I, the club played in the Brighton, Hove & District Football League, until the end of the 1919-20 season when they became one of the founder members of Sussex County Football League. They were runners-up on four occasions but it was not until 1964–65 that they were finally able to win the championship, after which they stepped up to the Athenian League. After winning the Division 2 title in 1968, promotion to the Premier Division followed just two years later when the club won the Division 1 title. In 1977 Lewes joined the newly expanded Isthmian League, initially in Division 2 and gained promotion to Division 1 in 1980. 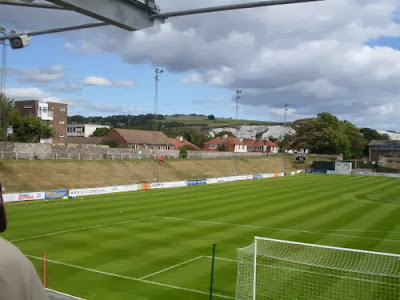 This Pieman visited the Dripping Pan for a pre-season match versus Tottenham Hotspur. A Terry Gibson inspired Spurs side ran out comfortable winners 6-0. 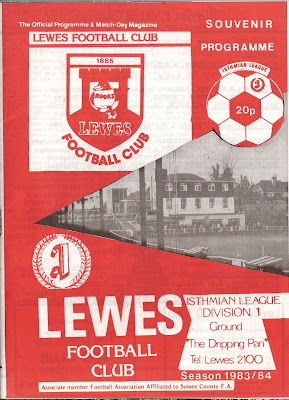