Vienna is the capital and largest city of Austria. Vienna is Austria's primary city, with a population of about 1.757 and its cultural, economic, and political centre. It is the 7th-largest city by population within city limits in the European Union. Until the beginning of the 20th century it was the largest German-speaking city in the world, and before the splitting of the Austro-Hungarian Empire in World War I the city had 2 million inhabitants. Today it is the second only to Berlin in German speakers. The English name Vienna is borrowed from the Italian name Vienna. "Vienna" and the official German name Wien, and the names of the city in most languages, are thought to be derived from the Celtic word "windo", meaning bright or fair. Vienna is well known for Wiener Schnitzel, a cutlet of veal (Kalbs Schnitzel) or pork (Schweins Schnitzel) that is pounded flat, coated in flour, egg and breadcrumbs, and fried in clarified butter. It is available in almost every restaurant that serves Viennese cuisine and can be eaten hot or cold. Vienna has a long tradition of producing the finest cakes and desserts. These include Apfelstrudel (hot apple strudel), Milchrahmstrudel (milk-cream strudel), Palatschinken (sweet pancakes), and Knödel (dumplings) often filled with fruit such as apricots.

FK Austria Wien was founded in Vienna on 15 March 1911 as the Wiener Amateur Sportvereinigung by players and officials of the Vienna Cricket and Football Club, taking violet and white as the new club's colours. The 1930s, one of Austria Wien's most successful eras, brought two titles (1933, 1936). Austria Wien won their first league title for 23 years in 1949, and retained it the following year. They later won a fifth title, in 1953. The club won many titles thereafter, starting with a hat-trick of titles (1961, 1962, and 1963). The 1970s saw the beginning of another successful era, despite no league title between 1970 and 1976 as an ageing squad was rebuilt. After winning the 1977 Austrian Cup national Cup, Austria Wien reached the 1978 European Cup Winners' Cup Final, which it lost 4–0 to Belgian club Anderlecht. The following season, the club reached the semi-finals of the European Cup, losing 1-0 on aggregate to Swedish team Malmo. In 1982–83, Austria Wien reached the semi-finals of the Cup Winner's Cup, losing 5-3 on aggregate to Real Madrid of Spain.

This Pieman ventured to the Ernst Happel Stadion for this UEFA Cup tie. A very entertaining 2-2 draw was played out by two attack minded sides in front of a 31,000 crowd. 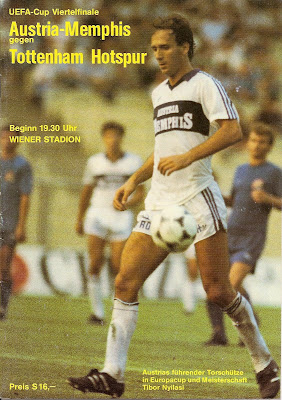 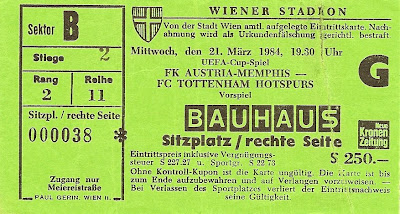