Plymouth is a city and unitary authority area on the south coast of Devon, about 37 miles south-west of Exeter, and about 190 miles south-west of London. It is situated between the mouths of the rivers Plym to the east and Tamar to the west, where they join Plymouth Sound. Plymouth's early history extends to the Bronze Age, when a first settlement emerged at Mount Batten. This settlement continued as a trading post for the Roman Empire, until the more prosperous village of Sutton, now called Plymouth surpassed it. In 1620, the Pilgrim Fathers departed Plymouth for the New World and established Plymouth Colony – the second English settlement in what is now the United States of America. During the English Civil War the town was held by the Parliamentarians and was besieged between 1642 and 1646. Throughout the Industrial Revolution, Plymouth grew as a commercial shipping port, handling imports and passengers from the Americas, and exporting local minerals (tin, copper, lime, china clay and arsenic) while the neighbouring town of Devonport became a strategic Royal Naval shipbuilding and dockyard town. In 1914 three neighbouring independent towns, the county borough of Plymouth, the county borough of Devonport, and the urban district of East Stonehouse were merged to form a single County Borough. The combined town took the name of Plymouth which, in 1928, achieved city status. The city's naval importance later led to its targeting and partial destruction during World War II, an act known as the Plymouth Blitz. After the war the city centre was completely rebuilt and subsequent expansion led to the incorporation of Plympton and Plymstock along with other outlying suburbs in 1967.

Plymouth Argyle FC was founded in 1886 as Argyle Football Club, the first match taking place on 16 October 1886 against Caxton, a team from Cornwall and saw the Pilgrims lose 2–0. Much speculation surrounds the origin of the name Argyle. One explanation is that they were named after the Argyll and Sutherland Highlanders, an army regiment with a strong football side of its own. Another theory is given the respective geographical placements–suggests the name comes either from the nearby public house, The Argyle Tavern, where the founder members may have met, or the local street named Argyle Terrace. An alternative suggestion is that their initial kit was decorated in the famous Argyle diamond pattern. After the Second World War Argyle's 20-year stay in Division Two came to an end in 1950–despite the efforts of inspirational captain Jack Chisholm. However, they were back in Division Two before long, after winning the Third Division South in 1952. The 1960’s ended disappointingly as Argyle returned to Division Three after relegation in 1968. In March 1973 a memorable moment in Argyle's history was witnessed by 37,639 people at Home Park. Argyle played a friendly match against Brazilian giants Santos FC, who at the time were one of the best teams in the world. That day Santos also had arguably the best footballer of all time in their starting line-up –Pelé. However, Argyle, then a Third Division side, shocked the world with a 3–2 win. There was a huge pitch invasion at the final whistle after a win for The Pilgrims. After spending six years in Division Three, Argyle finally returned to Division Two in 1974–75.This was mainly thanks to strike partners Paul Mariner and Billy Rafferty, who scored a very impressive 46 goals between them. However, they were back down again in 1977. Although the decade did end on a high note–in 1978–79 Kevin Hodges made his Argyle debut, and he went on to play 620 games for the club–more than anyone else. In 1984 Plymouth reached the FA Cup semi-final despite being in the Third Division. After a successful cup run in which they beat West Bromwich Albion, a top division team at the time and Derby County, they lost 1–0 to Watford in the semi-final at Villa Park courtesy of a George Riley goal.

This Pieman travelled to Devon on a Good Friday. The journey by train from London Paddington to Plymouth taking around three hours. The walk from the station to the ground was straightforward and within twenty minutes we had reached Home Park. A tight match saw the home side defeat Bristol City by the only goal. 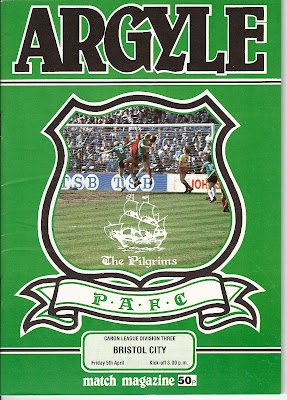