Anderlecht is one of the nineteen municipalities located in the Brussels-Capital Region of Belgium. There are several historically and architecturally distinct districts within the Anderlecht municipality. The first traces of human activity on the right bank of the Zenne date from the Stone Age and Bronze Age. The remnants of a Roman villa and of a Frankish necropolis were also found on the territory of Anderlecht.


The first mention of the name Anderlecht, however, dates only from 1047 under the forms Anrelech, then Andrelet (1111), Andreler (1148), and Anderlech (1186). At that time, this community was already home to a chapter of canons and to two feudal manors, those of the powerful lords of Aa and of Anderlecht. In 1356, Louis of Male, Count of Flanders fought against Brussels on the territory of Anderlecht, in the so-called Battle of Scheut, supposedly over a monetary matter. Although he defeated his sister-in-law, Joanna, Duchess of Brabant, and briefly took her title, she regained it the following year with the help of Charles IV, Holy Roman Emperor. In 1393, Joanna’s charter made Anderlecht a part of Brussels.


The club was founded as Sporting Club Anderlechtois in 1908 by some football fans at the Concordia café (rue d'Aumale). In 1917 moved to what is now Astrid Park, to a new stadium originally named Émile Versé Stadium. In 1983, the stadium was completely rebuilt and renamed Constant Vanden Stock Stadium.


I recall travelling in and out of Brussels on a day trip. Our lunchtime flight was from Gatwick and we had a few hours in the centre of Brussels before heading off to the stadium. The match was fairly even but Spurs would have been the happier of the two teams having taken the lead through a Paul Miller strike. With the away goal in the bag, it was with optimism that many of those attending the 2nd leg at White Hart Lane a fortnight later looked forward to the match. However, it took an equaliser from Graham Roberts to take the tie to extra time, setting up the dramatic penalty shoot out that propelled keeper Tony Parks into the Spurs record books. It was his save from the last of the ten penalties that gave Spurs the victory that won the UEFA Cup for the second time. 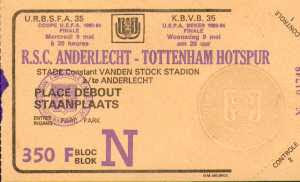 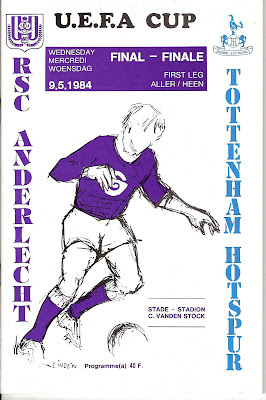 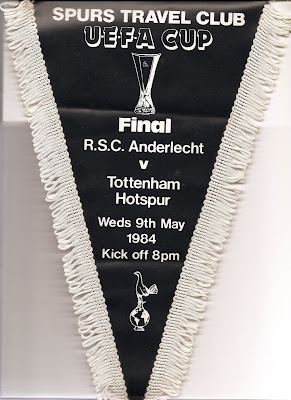