Wembley is an area of northwest London and part of the London Borough of Brent. It is home to the famous Wembley Stadium and Wembley Arena. Wembley formed a separate civil parish from 1894 and was incorporated as a municipal borough in 1937. Wembley is derived from the Old English proper name "Wemba" and the Old English "Lea" for meadow or clearing. The name was first mentioned in the charter of 825 of King Beornwulf. The village of Wembley grew up on the hill by the clearing with the Harrow Road south of it. Much of the surrounding area remained wooded. In 1547 there were but six houses in Wembley. Though small, it was one of the wealthiest parts of Harrow. At the dissolution of the monasteries, the manor of Wembley fell to Richard Andrews and Leonard Chamberlayne in 1543, who sold it to Richard Page Esq. of Harrow on the Hill the same year. The Page family continued as lords of the manor of Wembley for several centuries. There was a mill on Wembley Hill by 1673. In 1837, the London and Birmingham Railway (now part of the West Coast Main Line) was opened from London Euston, through Wembley, to Hemel Hempstead, and completed to Birmingham the following year. The changing names of the local station demonstrated the increasing importance of the 'Wembley' name. 'Sudbury' station opened in 1845, renamed as 'Sudbury and Wembley' in 1882, renamed as 'Wembley for Sudbury' in 1910, renamed as 'Wembley Central' in 1948, at the time of the Olympic Games. 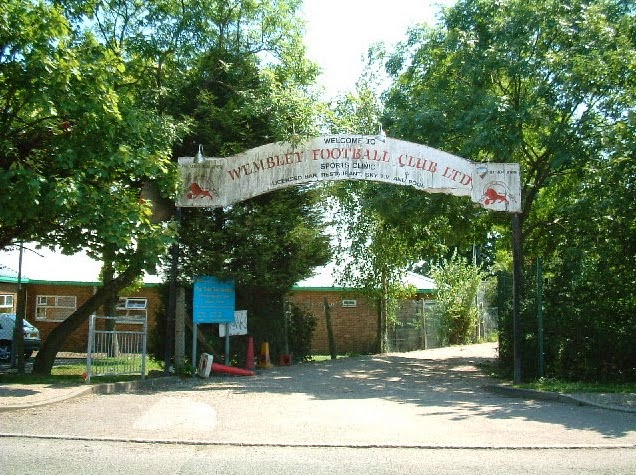 Wembley FC was formed in 1946 in the post-Second World War football boom, as many in the area felt it wrong that the area which held the English National Stadium didn't have its own senior football team. It was formed from two local junior clubs: Sudbury Rangers and Sudbury Ratepayers. As a result of their efforts, the club took the motto "A Posse Ad Esse" ("From Possibility to Reality"). Wembley began life in the Middlesex Senior League becoming League Champions in only their second season of existence in 1947–48. They then spent two seasons in the Spartan League Western Division, becoming Champions in the 1950–51 season. The club then joined the Corinthian League in 1956. That competition merged with the Athenian League in 1963 and became the First Division where the club remained until gaining promotion to the Premier Division in 1968. Wembley FC joined the Isthmian league at the end of the 1974–75 season.

This Pieman visited Vale Farm using the rail service from London Euston to North Wembley. From the station it took around twenty minutes to walk to the ground. The fringe Spurs team eased to a 4-0 victory in this pre-season friendly.