Harrow is a borough in north-west London. It borders Hertfordshire to the north and other London boroughs: Hillingdon to the west, Ealing to the south, Brent to the south-east and Barnet to the east. The town was formed in 1934 as an urban district of Middlesex by the Middlesex Review Order 1934, as a merger of the former area of Harrow on the Hill Urban District, Hendon Rural District and Wealdstone Urban District. The local authority was Harrow Urban District Council. The urban district gained the status of municipal borough on 4 May 1954 and the urban district council became Harrow Borough Council. In 1965 the municipal borough was abolished and its former area was transferred to Greater London from Middlesex under the London Government Act 1963 to form the London Borough of Harrow. It is uniquely the only London borough to replicate exactly the unchanged boundaries of a single former district. This was probably because its population was large enough. According to the 1961 census it had a population of 209, 080, making it the largest local government district in Middlesex. 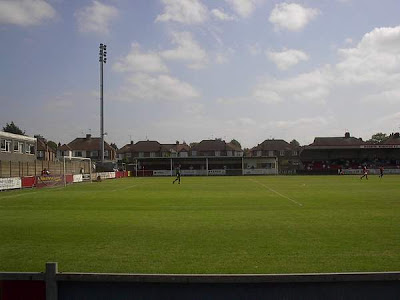 Harrow Town FC were originally formed in 1933 under the name Roxonian F.C. and played their first season in the Harrow and District League finishing runners up. The next season saw the club move into a new ground, Earlsmead Stadium, and a new league. They started in the Spartan League Division Two West and in 1938 they would finish second. As only the Champions were promoted they would have to wait till the following season when they finished top under their new name of Harrow Town F.C. to progress. The war years saw Harrow Town compete in the West Middlesex Combination and then the Middlesex Senior League. With the war over in Europe, Harrow Town finally joined the top level of the Spartan League having been promoted six years earlier. They remained in the Spartan League until finishing runners up in 1958 and being promoted to the Delphian League. When this league disbanded in 1964 they were accepted into the Athenian League, where they were promoted to Division One at the first attempt having finished runners up and only missing out on the top spot on goal difference. In 1967 the club changed its name once again to Harrow Borough F.C. but in the same year were relegated to Athenian League Division Two. This period would see the club facing extinction but the eventual sale of their second pitch to the local council enabled the club to redevelop the ground. Having survived off the pitch they started to make progress on it when in 1975 when they were elected to the Isthmian League, initially in Division Two. In 1979 they were promoted, having finished second, to what was now called the Premier Division where they have played ever since. Their first few seasons in the Premier Division saw steady progress. In 1982–83 the club finished third in the league and won the Middlesex Senior Cup. Harrow also had its furthest ever run in the FA Trophy reaching the semi-finals only to lose in the second leg to the eventual winners Telford United. 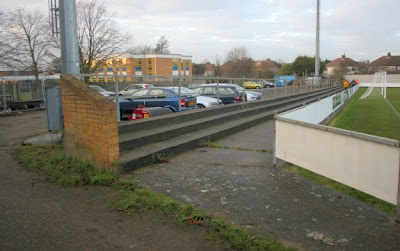 This Pieman visited Earlsmead for a midweek pre-season friendly after work. Travelling from London Marylebone to Sudbury & Harrow Road, the ground is no more than a 5 minute walk from the station. There are other local tube options on the Central and Piccadilly lines. A young Spurs side won an entertaining match 4-0. 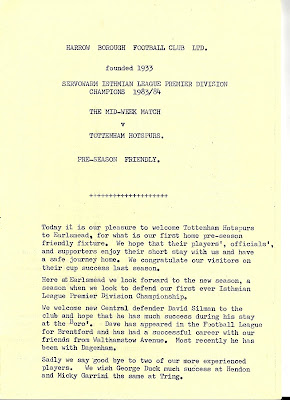