Halifax is a Minster town, within the Metropolitan Borough of Calderdale in West Yorkshire, England. It is well known as a centre of England's woollen manufacture from the 15th century onward, originally dealing through the Halifax Piece Hall. The name is first recorded in about 1091 in the form Halyfax, possibly from the Old English halh-gefeaxe, meaning "area of coarse grass in the nook of land". This explanation is now preferred to derivations from the Old English halig (holy), for example hālig feax (holy hair), first proposed by 16th century antiquarians. The incorrect interpretation gave rise to two local legends. One concerned a maiden killed by a lustful priest whose advances she spurned. Another held that the head of John the Baptist was buried here after his execution. The legend is almost certainly medieval rather than ancient, though the town's coat of arms still carries an image of the saint. Another explanation for the name is a corruption of the Old English words Hay and Ley, 'hay' and 'clearing' or 'meadow'. This etymology is based on the presence of Haley Hill, the nearby hamlet of Healey (another corruption), and the common occurrence of the surnames Hayley/Haley around Halifax. 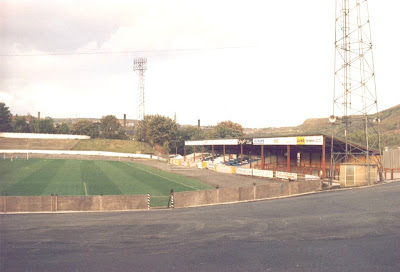 Halifax Town AFC was formed on 24 May 1911 at the Saddle Hotel. They were one of the founder members of Football League Third Division North in 1921, and remained in that division until restructuring in 1958. The club played at The Shay (hence the reason for their nickname "The Shaymen"). The largest attendance was in February 1953 for an FA Cup 5th round tie with Tottenham Hotspur which drew a crowd of 36,885. The club's fortunes were turned around in 1967 when Alan Ball Snr took over as manager of the club. He achieved promotion with the club in 1969. Ball left soon after, although the club enjoyed some measure of success in the Football League Third Division in the early seventies, finishing one place short of promotion in 1971 (one place higher than Aston Villa), and many of the club's supporters tout this era as the "Glory Days". Also in 1971 the club beat the former European champions Manchester United 2–1 in the pre-season Watney Cup competition. However, Halifax were relegated back to the fourth division in 1976. Ever since the relegation of 1976, the club saw a long period in the fourth division with very little success, but a lot of financial problems. The club always languished near the bottom of the football league, managing no better than a single mid-table finish in 1983. 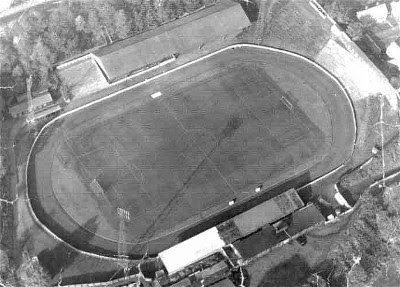 This Pieman visited The Shay to attend a league cup tie with Tottenham Hotspur. The journey from London had involved travelling via Manchester and using the line through Todmorden and Hebden Bridge. A comprehensive performance saw the visitors run out 5-1 winners. 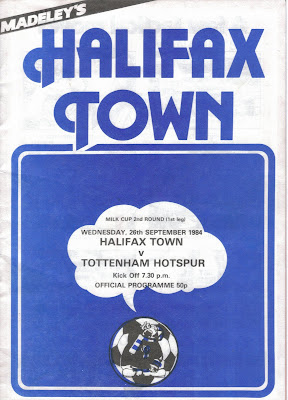