Rotherham is a large town in South Yorkshire, England. It was founded in the very early Middle Ages. A small Roman fort lies to the south-west in the upper flood meadow of the Don. It established itself as a Saxon market town, on a Roman road near a forded part of the River Don. By the late Saxon period, Rotherham was at the centre of a large parish. Following the Norman Conquest an absentee lord held the most inhabited manor. In the 1480s the Rotherham-born Archbishop of York, Thomas Rotherham, instigated the building of a College of Jesus or Jesus College, Rotherham to rival the colleges of Cambridge and Oxford. It was the first brick building in what is now South Yorkshire. The College and new parish church of All Saints made Rotherham an enviable and modern town at the turn of the 16th century. The college was dissolved in 1547 in the reign of Edward VI, its assets stripped for the crown to grant to its supporters. Very little remains of the original building; walls of part of the College of Jesus are encased within a few buildings on Effingham Street. The history of Thomas Rotherham and education in the town are remembered in the name of Thomas Rotherham College. In the early Industrial Revolution major uses of iron demanded good local ore and established processing skills for iron strength, qualities found in Rotherham's smelting plants and foundries. Iron, and later steel, became the principal industry in Rotherham, surviving into the 20th century. The Walker family built an iron and steel empire in the 18th century, their foundries producing high quality cannon, including some for the ship of the line HMS Victory, and cast iron bridges, one of which was commissioned by Thomas Paine. Milling grain into flour was a traditional industry in Rotherham, formerly in the Millmoor area, hence Rotherham United FC's nickname "The Millers". Flour milling continues to this day at the Rank Hovis town mill site on Canklow Road. 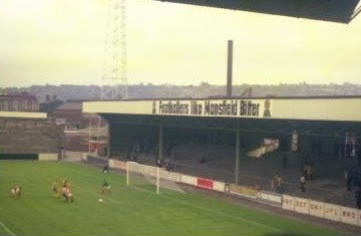 The club's roots go back to 1870, when it was formed as Thornhill Football Club (later Thornhill United). For many years the leading team in the area was Rotherham Town, who spent three seasons in the Football League while Thornhill United were still playing in the Sheffield & Hallamshire League. By the turn of the century, however, Town had resigned from the Football League and gone out of business; a new club of the same name later joined the Midland League. Meanwhile, Thornhill's fortunes were on the rise to the extent that in 1905 they laid claim to being the pre-eminent club in the town and changed their name to Rotherham County. For a period both clubs competed in the Midland League, finishing first and second in 1911–12. Over time it became clear that to have two professional clubs in the town was not sustainable. Talks had begun in February 1925 and in early May the two clubs merged to form Rotherham United. Days later the reformed club was formally re-elected under its new name. Immediately after the Second World War United finished as runners-up three time in succession between 1947 and 1949 and then were champions of Division Three (North) in 1951. Rotherham reached their highest ever league position of third in the Football League Second Division in 1955, when only goal average denied them a place in the top flight after they finished level on points with champions Birmingham City and runners-up Luton Town. The club held on to its place in Division Two until 1968 and then went into a decline that took them down to Division Four in 1973. In 1975 they were promoted back to the Third Division finishing in the 3rd promotion spot in the Fourth Division. The Millers won the Division Three title in 1981. Rotherham had a dismal first half of the 1981–82 season but a surge after the turn of 1982 saw them emerge as promotion contenders for the first time in nearly 30 years. This season saw the Millers beat Chelsea 6–0 at home and 4–1 away at Stamford Bridge and is considered by many to be Rotherham's greatest all-time league 'double'. This was the first season of 3 points for a win rather than 2 in the league, and in the end they missed out on promotion by 4 points and finishing seventh. Rotherham have played at Millmoor since 1907. 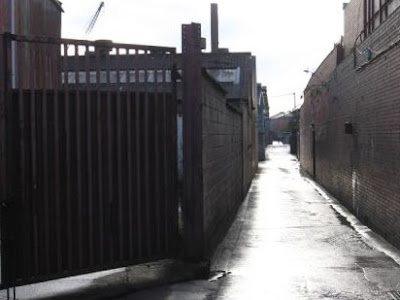 This Pieman travelled by train from London via Sheffield to Rotherham station. The station is only a short walk from the stadium. A very entertaining match saw the home side draw 3-3 with visitors Bristol Rovers. 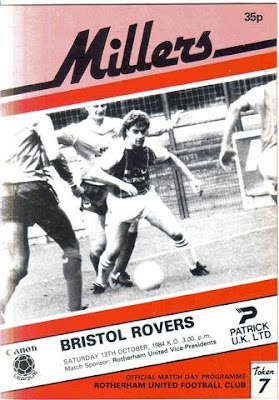 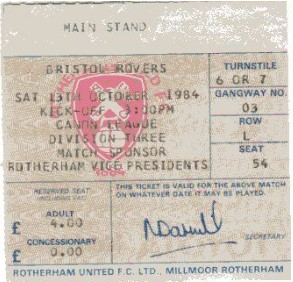