Chester is a city in Cheshire, England, lying on the River Dee, close to the border with Wales and was granted city status in 1541.  Chester's four main roads, Eastgate, Northgate, Watergate and Bridge, follow routes laid out almost 2,000 years ago. One of the three main Roman army bases, Deva, later became a major settlement in the Roman province of Britannia. After the Romans left in the 5th century, the Saxons fortified the town against the Danes and gave Chester its name. The patron saint of Chester, Werburgh, is buried in Chester Cathedral. Chester has a number of mediaeval buildings, but some of the black-and-white buildings within the city centre are actually Victorian restorations. The Industrial Revolution brought railways, canals, and new roads to the city, which saw substantial expansion and development – Chester Town Hall and the Grosvenor Museum are examples of Victorian architecture from this period.

Chester City Football Club, which until 1983 was known as Chester F.C joined the Football League in 1931.They have played in a variety of leagues between 1885 and 1985.  From 1906 they played at The Stadium which is more commonly referred to as Sealand Road. 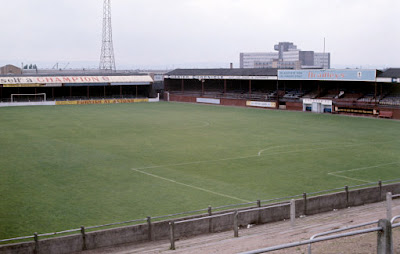 This Pieman visited Sealand Road when staying on Merseyside one weekend. It was a real treat to watch Chester City demolish visitors Southend United by 5 goals to 1. At the time there was no regular direct train service from Liverpool to Chester and I had to change services at Rock Ferry. 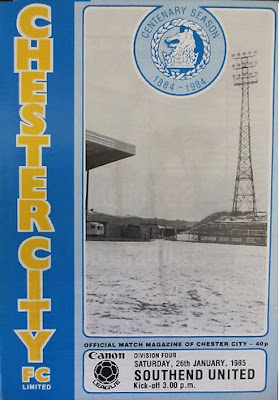