Reading is a large town and unitary authority area in Berkshire. It may date back to the Roman occupation of Britain, possibly as a trading port for Calleva Atrebatum. However the first clear evidence for Reading as a settlement dates from the 8th century, when the town came to be known as Readingum. The name probably comes from the Readingas, an Anglo-Saxon tribe whose name means Reada's People in Old English, or less probably the Celtic Rhydd-Inge, meaning Ford over the River. In late 870, an army of Danes invaded the kingdom of Wessex and set up camp at Reading. On 4 January 871, in the first Battle of Reading, King Ethelred and his brother Alfred the Great attempted unsuccessfully to breach the Danes' defences. The Danes remained in Reading until late in 871, when they retreated to their winter quarters in London. After the Battle of Hastings and the Norman Conquest of England, William the Conqueror gave land in and around Reading to his foundation of Battle Abbey. In its 1086 Doomsday Book listing, the town was explicitly described as a borough. Reading Abbey was founded in 1121 by Henry I, who is buried within the Abbey grounds. The Abbey was largely destroyed in 1538 during Henry VIII's dissolution of the monasteries. The last abbot, Hugh Cook Faringdon, was subsequently tried and convicted of high treason and hanged, drawn and quartered in front of the Abbey Church. Reading played a significant role during the Revolution of 1688: the second Battle of Reading was the only substantial military action of the campaign. The 18th century saw the beginning of a major iron works in the town and the growth of the brewing trade for which Reading was to become famous. Reading's trade benefited from better designed turnpike roads, which helped it establish its location on the major coaching routes from London to Oxford and the West Country. During the 19th century, the town grew rapidly as a manufacturing centre. The Great Western Railway arrived in 1841, followed by the South Eastern Railway in 1849 and the London and South Western Railway in 1856. Compared to many other English towns and cities, Reading suffered little physical damage during either of the two World Wars that afflicted the 20th century, although many citizens were killed or injured in the conflicts. The Lower Earley development, built in 1977, was one of the largest private housing developments in Europe. It extended the urban area of Reading as far as the M4 motorway, which acts as the southern boundary of the town.

Reading were formed on 25 December 1871, following a public meeting at the Bridge Street Rooms organised by the future club secretary Joseph Edward Sydenham. The early matches were played at Reading Recreation Ground, and later the club held fixtures at Reading Cricket Ground, Coley Park and Caversham Cricket Ground. The switch to professionalism in 1895 resulted in the need for a bigger ground and, to this end, the club moved again, to the purpose-built Elm Park on 5 September 1896. In 1908, the club's annual general meeting proposed moving to a new ground near Reading railway station. A board meeting the following year decided that the move would not be possible, as "there was no chance of a move to the ground near to the GWR railway stations due to the actions of the Great Western Railway". As a result of Reading's relegation to Division Four after the 1982–83 season, the club was threatened with a merger with Oxford United – a move that would have seen the closure of Elm Park. The teams' merger and closure of the stadium was subsequently averted, and the following season saw Reading's promotion back to Division Three under the guidance of Ian Branfoot.

This Pieman travelled to Reading by train alighting at the main station in the centre of town. The walk from there to Elm Park took around half an hour. After the match I caught a connecting service from Reading West which is closer to the ground, enabling a connection at Reading for the onward journey to London Paddington. Visitors Brentford won through to the next round of the competition with a 3-1 victory. 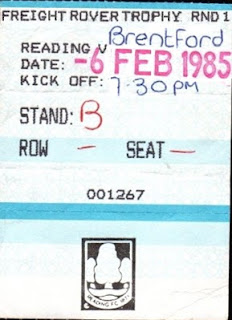 
Total visits to this venue = 4