Rochdale is a market town in Greater Manchester, England, positioned at the foothills of the South Pennines on the River Roch, 5.3 miles (8.5 km) north-north-west of Oldham, and 9.8 miles (15.8 km) north-north-east of the city of Manchester. Rochdale seems to be named from its position on the River Roch but is recorded as Recedham in the Doomsday Book. The name is derived from Old English reced meaning "hall", and ham, a "homestead". Over time, the name changed to Rachedale and eventually Rochdale. The ancient parish of Rochdale was a division of the hundred of Salford and one of the largest ecclesiastical parishes in England comprising several townships. By 1251, Rochdale had become important enough to have been granted a Royal charter. Subsequently, Rochdale flourished into a centre of northern England's woollen trade, and by the early 18th century was described as being "remarkable for many wealthy merchants". Rochdale rose to prominence during the 19th century as a major mill town and centre for textile manufacture during the Industrial Revolution. It was a boomtown of the Industrial Revolution, and amongst the first ever industrialised towns. The Rochdale Canal - one of the major navigable broad canals of the United Kingdom - was a highway of commerce during this time used for the haulage of cotton, wool and coal to and from the area. The success of Rochdale's textile industry in the 19th century led to its rise to borough status and it remained a dominant settlement in the region. However, during the 20th century Rochdale's spinning capacity declined towards an eventual halt. Rochdale Town Hall - a Grade I listed building - dates from 1871 and is one of the United Kingdom's finest examples of Victorian Gothic revival architecture. Actors Colin Baker, Anna Friel and Goodie Bill Oddie were born in Rochdale.

Rochdale F.C. was formed in 1907. After World War I the Football League was expanded and the club unsuccessfully applied to join. In 1921 Rochdale was finally recommended to be included in the new Third Division North, and played their first League game at home against Accrington Stanley on 27 August 1921, winning 6–3. However, this first season ended with the club at the bottom of the League, having to reapply for membership. The club's first promotion came in 1969, earned by a team largely assembled by manager Bob Stokoe, though it was Stokoe's assistant, Len Richley who steered Rochdale to promotion after Stokoe moved to Carlisle United. In the early stages of the 1969–70 season, Rochdale topped the Division Three table, sparking hopes of a second successive promotion. The team's form dramatically collapsed around Christmas 1969, however, and a failure to pull the team out of its tailspin led to the dismissal of Richley, who was never able to emerge from the shadow of his predecessor. The following three seasons saw the club finish in the lower reaches of the Division Three table, narrowly avoiding relegation each time. In the 1973–74 season Rochdale was relegated after a dismal campaign in which they won only 2 of 46 league games. The club finished bottom of the league in 1977–78, but was successful in their bid for re-election. Southport, which had finished one place above Rochdale, was demoted instead and replaced by Wigan Athletic. Rochdale finished bottom for a second time in 1979–80, but was again re-elected – by one vote over Altrincham. 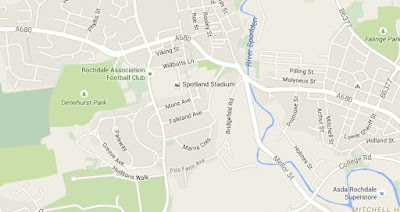 This Pieman travelled to Rochdale by train from Manchester Victoria. From the station the onwards bus journey to Spotland took around ten minutes. The home side were comfortable winners over visitors Northampton Town, scoring three goals without reply in this Football League, Division Four encounter. 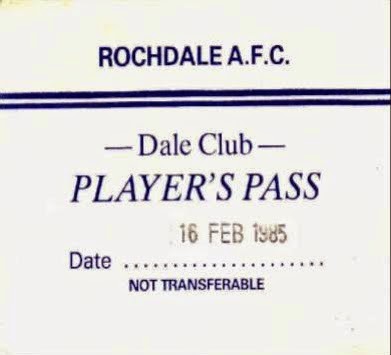 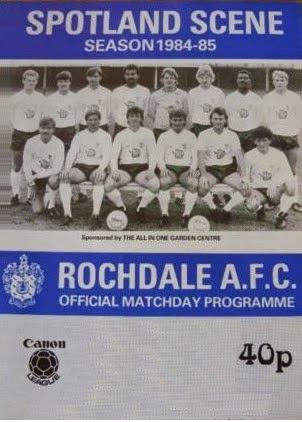