Madrid is the capital of Spain and its largest city. It is the third-largest city in the European Union, after London and Berlin, and its metropolitan area is the third largest in the European Union after London and Paris. The city spans a total of 233.3 square miles. The city is located on the Manzanares River in the centre of both the country and the Community of Madrid (which comprises the city of Madrid, its conurbation and extended suburbs and villages); this community is bordered by the autonomous communities of Castile and León and Castile-La Mancha. As the capital city of Spain, seat of government, and residence of the Spanish monarch, Madrid is also the political, economic and cultural centre of Spain. The Madrid region experiences a Mediterranean climate with cool to cold winters due to its altitude of 2,188 ft above sea level, including sporadic snowfalls and minimum temperatures often below freezing. Summers are warm to hot with average July temperatures ranging from 31 °C (88 °F) to 33 °C (91 °F) depending on location. Summer temperatures occasionally climb over 35 °C (95 °F) during the city's heatwaves. Due to Madrid's altitude and dry climate, diurnal ranges are often significant during the summer. 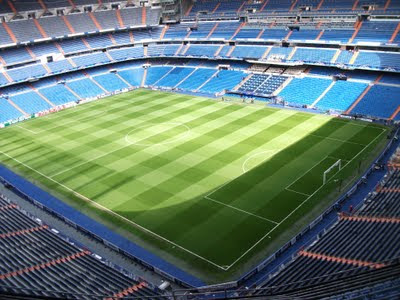 Real Madrid’s origins go back to when football was introduced to Madrid by the academics and students of the Institución libre de enseñanza, which included several Cambridge and Oxford University graduates. They founded Football Club Sky in 1897, playing on Sunday mornings at Moncloa. It split into two clubs in 1900: New Foot-Ball de Madrid and Club Español de Madrid. On 6 March 1902, after a new Board presided by Juan Padrós had been elected, Madrid Football Club was officially founded. Three years after its foundation, in 1905, Madrid FC won its first title after defeating Athletic Bilbao in the Spanish Cup final. The club became one of the founding sides of the Royal Spanish Football Federation on 4 January 1909, when club president Adolfo Meléndez signed the foundation agreement of the Spanish FA. After moving between grounds the team moved to the Campo de O'Donnell in 1912. In 1920, the club's name was changed to Real Madrid after King Alfonso XIII granted the title of Real (Royal) to the club. 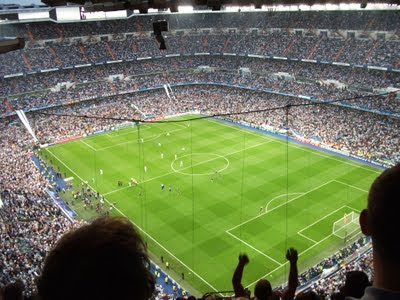 Santiago Bernabéu Yeste became president of Real Madrid in 1945. Under his presidency, the club, its stadium Estadio Santiago Bernabéu and its training facilities Ciudad Deportiva were rebuilt after the Spanish Civil War damages. Beginning in 1953, he embarked upon a strategy of signing world-class players from abroad, the most prominent of them being Alfredo Di Stéfano. The club won the European Cup five times in a row between 1956 and 1960. This Pieman witnessed a tense match between the two sides. Trailing 1-0 from the first leg at White Hart Lane, Spurs had a fine goal from Mark Falco ruled out by officials, no doubt feeling the pressure from the home fans. A decent draw was not enough with the home side progressing by the narrowest of margins. 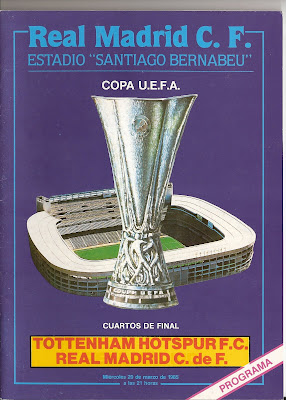