Doncaster is a town in South Yorkshire, England, and the principal settlement of the Metropolitan Borough of Doncaster. Historically within the West Riding of Yorkshire. The town was an Anglo-Saxon burh, and is mentioned in the 1003 will of Wulfric Spott. Shortly after the Norman Conquest, Nigel Fossard refortified the town and constructed Conisbrough Castle. By the time of the Doomsday Book, Hexthorpe, a small village located on the edge of the town, was described as having a church and two mills. Many of Doncaster's streets are named with the suffix 'gate'. The word 'gate' is derived from the old Danish word 'gata,' which meant street. During Medieval times, craftsmen or tradesmen with similar skills, tended to live in the same street. Baxter is an ancient word for baker; Baxtergate was the bakers' street. Historians believe that 'Frenchgate' may be named after French-speaking Normans who settled on this street. During the First World War and Second World War, the town became involved in munitions manufacturers.


Belle Vue was opened by Charles E. Sutcliffe from the Football League on Saturday, 26 August 1922. The opposition was Gainsborough Trinity. The initial capacity was for 7,000 spectators, which was extended year-on-year as finances allowed. In 1927 the main stand at Doncaster's former ground in the suburb of Bennetthorpe was jacked up and moved on rollers to Belle Vue to form the family stand. In 1938 the capacity of Belle Vue was increased to 40,000 and it was in 1948 that the stadium recorded its highest attendance of 37,099 against Hull City, although apocryphal accounts refute this and claim that many more gained entry to the ground by climbing over walls and thus avoided having to pay. 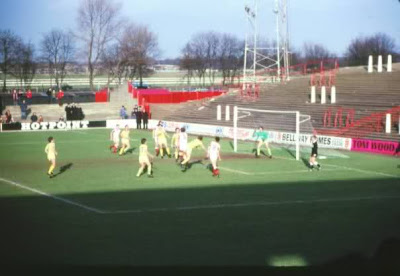 This Pieman visited Belle Vue on a mild January afternoon. The journey by train from London Kings Cross was swift and this facilitated a decent opportunity to sample quality Yorkshire ale. Visitors Reading were far superior to their hosts on the day, comprehensively winning 4-0. 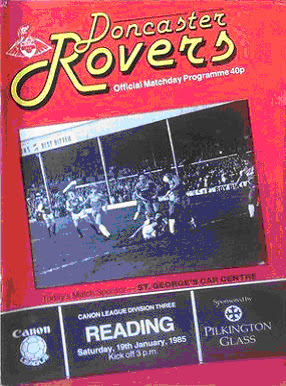