Wealdstone is an area of the London Borough of Harrow, northwest London. It is located north of Harrow, south of Harrow Weald, west of Belmont and east of Headstone. The eponymous Weald Stone is a sarsen stone, formerly marking the boundary between the parishes of Harrow and Harrow Weald. It is located outside the Weald Stone Inn (formerly the Red Lion), off High Road, Harrow Weald. Harrow & Wealdstone station was opened by the London and Birmingham Railway (L&BR) as Harrow on 20 July 1837 in what was then rural Middlesex. At the time the station was built, the area was fields and the nearest large settlement was at Harrow on the Hill about 1.5 miles to the south. Wealdstone was a collection of houses at the north end of what is now Wealdstone High Street, about 1 mile north of the station. The Harrow and Wealdstone rail crash of 1952, killing 112 people, remains Britain's worst peacetime rail disaster.


Two separate Wealdstone Football Clubs were in existence as far back as the 19th century, but the present club was formed at the start of the 1899–1900 season. It started with a friendly match on 7 October 1899, winning 6–1 at Northwood. Seven years later the club was forced to close down. The club was reformed in time for the 1908–09 season, enjoying a successful period before another closedown during World War I, which claimed the lives of a great many of its members. From the 1920s onwards, though now drawing very sizeable crowds for amateur football, the club had little success on the pitch until the 1950s, but beat RAF Uxbridge in their third successive Middlesex Sports Red Cross Cup final win, in the first-ever amateur match at Wembley Stadium.  Wealdstone took part in the first televised broadcast of a football match in 1946 when it played at Barnet in an Athenian League game. It also participated in the first live showing of an FA Cup tie in 1949 v Colchester United at Lower Mead. Finally, in 1952 it won its first major trophy becoming champions of the Athenian League. The club then began a period of sustained growth, winning three Middlesex Senior Cup titles, in 1959, 1963 and 1964. Major national success was achieved in 1966 when the club won the FA Amateur Cup at Wembley Stadium, beating local rivals Hendon.

This Pieman travelled to Lower Mead from London Euston, alighting at Harrow & Wealdstone station. The walk from there to the ground took a little over 5 minutes. This Maunday Thursday clash saw Enfield grab an unexpected victory over a Wealdstone side that ended the season as champions of the Conference and FA Trophy winners - a fine 'double'. 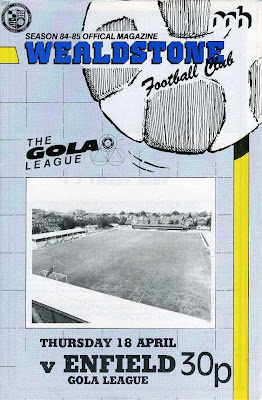