Chesterfield is a market town and a borough of Derbyshire, United Kingdom. It lies 24 miles (39 km) north of Derby, on a confluence of the rivers Rother and Hipper. Archaeology of the town traces its beginnings to the 1st century and the construction of a Roman fort, which became redundant and was abandoned once peace was achieved. Later an Anglian village grew up on the site; the name Chesterfield stems from the Anglo-Saxon words 'caester' (a Roman fort) and 'feld' (grazing land). Chesterfield received its market charter in 1204 and has a moderate sized market on three days a week. The town sits on a large coalfield, which formed a major part of the area's economy until the 1980s. The town's most famous landmark is the distinctive 'crooked' spire of its predominantly 14th-century church. In 1266, it was the site of the Battle of Chesterfield, in which a band of rebellious barons were defeated by a royalist army. Elizabeth I granted a charter of incorporation in 1594, creating a corporation consisting of a mayor, six aldermen, six brethren, and twelve capital burgesses. This remained the governing charter until the borough was reformed under the Municipal Corporations Act 1835. Chesterfield benefited greatly from the building of the Chesterfield Line – part of the Derby to Leeds railway (North Midland Line), which was begun in 1837 by George Stephenson. During its construction, a sizeable seam of coal was discovered during the construction of the Clay Cross Tunnel. This and the local ironstone were promptly exploited by Stephenson who set up a company in Clay Cross to trade in the minerals. During his time in Chesterfield, Stephenson lived at Tapton House, and remained there until his death in 1848.

The date on which the first Chesterfield Football Club was formed is uncertain. A Derbyshire Times newspaper report from 2 January 1864 noted a scheduled game between "Chesterfield and Norton football clubs." This suggests that a Chesterfield F.C., whether loosely or formally organised, was active from at least 1863. By contrast, earlier research had placed a formally constituted Chesterfield F.C. as being established as an offshoot of Chesterfield Cricket Club in October 1866. Whatever the precise origins in the 1860s, the cricket and football clubs moved to the Recreation Ground at Saltergate in 1871, the same year that they became separate entities. However, a souring of the relationship between the two led to the closure of the football club a decade later, in 1881, when it found itself homeless. Many players joined other local sides, notably Chesterfield Livingstone, a club that took up using the Saltergate site, and Chesterfield Spital, a team which competed in the early years of the FA Cup. Three years later, in 1884, a new entity called Chesterfield Football Club was formed, again making its home at Saltergate. It drew in players from the preceding club and both Chesterfield Livingstone and Chesterfield Spital, though records show Spital continued as a separate club. After changing its name to Chesterfield Town, the club turned professional in 1891 and won several local trophies in the following two seasons, entering the FA Cup for the first time in 1892. Chesterfield joined the Midland League in 1896, and successfully applied for a place in the Second Division of the Football League at the start of the 1899–1900 season, finishing seventh. After finishing bottom of the League three years in a row, the club failed to gain re-election to the League in 1909, returning to the Midland League. In 1915 Chesterfield Town was put into voluntary liquidation and a new club with the same name was formed by a local restaurateur to play wartime football using locally based "guests" from Football League clubs. It lasted only two years before its management and players were suspended by the FA for illegal payments and the club shut down. To fill the footballing gap left in the town, Chesterfield Borough Council re-formed the club on 24 April 1919, seeing it as a way to spearhead improvements in local recreational provision. Initially called Chesterfield Municipal F.C., the club made great strides on the pitch in its first season, lifting the Midland League title – and did so despite three changes of management. However, The Football Association and Football League had already made clear their vehement opposition to a council-run club and ultimately forced it to cut its ties and become independent, reflected in a name change to Chesterfield F.C. in December 1920. In 1921–22, Chesterfield F.C. became a founder member of the new Football League Third Division North. Following the arrival of new manager Ted Davison in 1926 and chairman Harold Shentall in 1928, the club won the Third Division North title in the 1930–31 season with an 8–1 victory over Gateshead on the final day, and were promoted to the Second Division. Relegation followed in 1933, but the Third Division North title was again won in 1936. After the war the club achieved their best League position, finishing fourth in the Second Division in 1946–47. However, the sale of several players at the end of the season reduced their overall quality, and the club was relegated at the end of the 1950–51 season. They were placed in the Third Division on its formation at the start of the 1958–59 season; future England international goalkeeper Gordon Banks made his professional debut in a Third Division game in November 1958, but was sold to Leicester City for a then-club record £7,000 fee at the end of the season. In 1961 Chesterfield were relegated to the Fourth Division for the first time. Chesterfield spent eight seasons in the Fourth Division, earning promotion as champions in 1969–70 under manager Jimmy McGuigan. The Anglo-Scottish Cup was won in 1981. The club was relegated in 1983–84, and won the Fourth Division title the following season.

This Pieman visited Chesterfield by train from London St Pancras. The walk from the station taking no more than twenty minutes. Chris Waddle and Paul Allen were making the debuts for Spurs with the visitors winning this pre-season match 4-2. 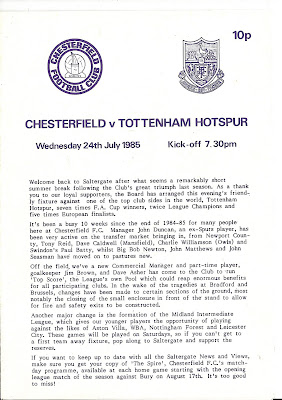 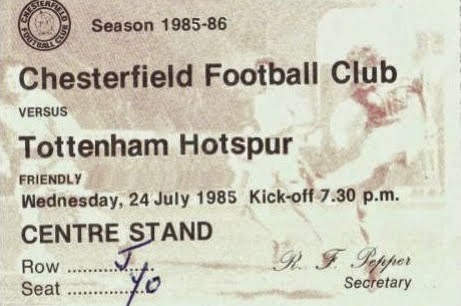