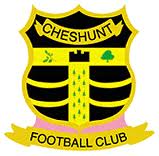 Cheshunt is a town in the Borough of Broxbourne, Hertfordshire. The town is located 13 miles from Charing Cross, making it one of the closest parts of Hertfordshire to Central London. The town name comes from the Old English name for the area, Cestrehunt, which probably refers to a "castle, erected by the Romans" and the word cestre being derived from the Latin castrum meaning "fort". This is commemorated in the arms of the former Cheshunt urban district council. As Princess Elizabeth, Queen Elizabeth I lived at Cheshunt in the care of Sir Anthony Denny, after she left Queen Catherine Parr's household in 1548. The River Lee Navigation passes through Cheshunt and was used for the transport of flowers and crops to the London markets for many years until road transport became more viable. A wharf existed just east of the railway on the site now occupied by Herts Young Mariners Base.

From the end of World War II a large area of the River Lea flood plain was used for sand and gravel extraction which resulted in the creation of the now mature lakes which are popular with anglers, birdwatchers and naturalists. The area now forms part of the 1,000 acres River Lee Country Park and the Turnford and Cheshunt Pits. 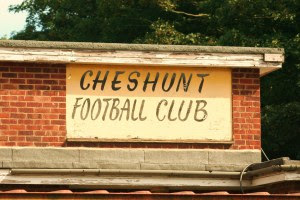 The reformed club was established in July 1946 at a public meeting in the Co-op Hall in Waltham Cross. A group of local businessmen decided to form a new club for the town after the original Cheshunt F.C. had folded in the 1930s. Local junior team Crossbrook Sports were used as the basis for the new club, retaining their Amber and Black colours and with Roy Bailey as their manager. 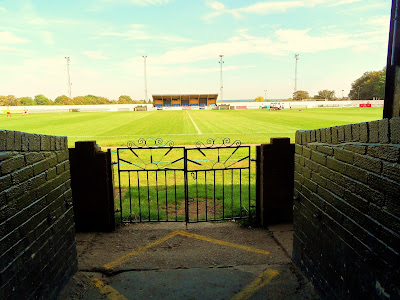 The club play at the Cheshunt Stadium on Theobalds Lane. Originally a gravel pit, by the 1930s the site had become the local rubbish tip, but between February and October 1949, it was cleared, levelled and a pitch was laid. Drainage problems forced the club to abandon the stadium before the season had even ended and move to a new ground on Brookfield Lane. They returned to the stadium in 1952–53 but again left after a season, due to the poor playing surface, to return to Brookfield Lane though this time as the tenants of Tottenham Hotspur, who were using it as their training ground. At the end of the 1957–58 season Cheshunt were asked to leave and so returned to the Cheshunt Stadium. The nearest railway station to the stadium is Theobalds Grove and it was to and from here that the Pieman travelled. On the night an emerging Stevenage Borough outfit outplayed the home side and won 3-0. 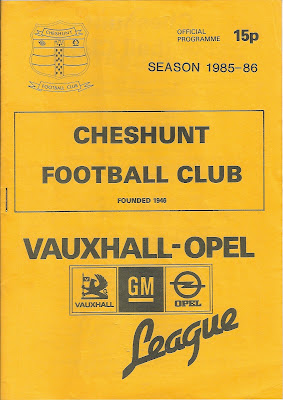 Subsequent visits to the Cheshunt Stadium