Fareham is a town in the south east of Hampshire, situated between the cities of Southampton and Portsmouth. It gives its name to the borough comprising the town and the surrounding area. To the south of the town lies Gosport, itself a separate borough, to the east Portchester, to the north the M27 motorway and Wickham, part of the City of Winchester. Fareham traditionally relied on its clay soil for industry, producing bricks, tiles and chimney pots. This past is commemorated through place names such as Kiln Road. The most famous example of a building constructed of "Fareham red bricks" is probably the Royal Albert Hall, London. Fareham is situated at the north-west tip of Portsmouth Harbour where the River Wallington joins. Small industries still operate, reflecting Fareham's maritime past. Fareham has in recent years developed several attractions to draw visitors to the town. The historic High Street features a fine collection of Georgian buildings, home to many of the town's restaurants. 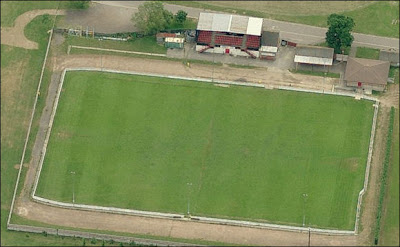 Fareham Town FC was formed in 1947, when three local sides Fareham FC, Fareham Brotherhood FC and Fareham Youth Centre FC amalgamated together after a public meeting in the town in 1946, it was suggested to form a football club for the town. The club joined the Portsmouth League and started playing their games at Beaconsfield Meadow, before moving to Bath Lane. At the end of the 1948-49 season the club gained promotion to Division 3 (East) of the Hampshire League, and gained promotion to Division two as champions at the first attempt. The club made further progress in the 1952-53 season when they finished as Runners-up in Division two to gain promotion to Division one. Three seasons later the club then made its debut in the FA Cup, making it to the fourth qualifying round before being knocked out by Wycombe Wanderers. The club in the 1959-60 competition won Division one for the first time. Further success would follow when the club won Division One, five times in a row from the 1962-63 campaign. The club would go on to win the league twice more during the 1970's. In 1975 the club then moved to its present home of the Cams Alders ground. 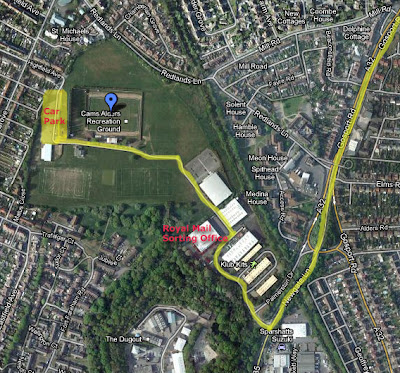 This Pieman visited Cams Alders for a friendly match against Tottenham Hotspur on a Tuesday evening after work. The train journey from London Waterloo involved changing services at Eastleigh. The match was arranged as part of the deal that had seen David Leworthy move from Fareham to Spurs. A match full of goals was won by Spurs 6-3. 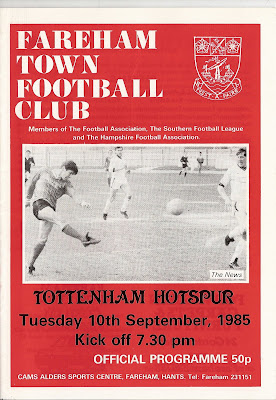