Yeading is an area in London, which forms part of the London Borough of Hillingdon.  The earliest surviving documented allusion to it dates from 757 AD, being a land grant which mentioned Geddinges (Yeading). Yeading Dock was one of many docks built along the Grand Union Canal in the 19th and early 20th centuries. The main industry in Hayes and Yeading at this time was brick making and the canal provided a reliable way of transporting larger numbers of bricks.
Yeading was still not developed in the 1920s. Yeading Lane was often flooded, and access beyond Yeading to Northolt seems to have been by footpath only before the First World War. During the War, a properly constructed road was built linking the Great Western Railway station at Hayes with the L.N.E.R. line at Northolt.   After the Second World War, a large prefab estate was erected in Yeading. 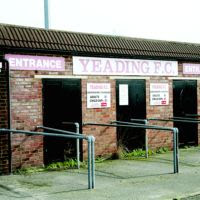 Known as Yeading Football Club after 1965, they could trace their roots to a youth club formed in 1960. They have been known as Yeading Football Club after 1965. However, they remained in the junior and intermediate ranks until the 1980s when they were at last granted senior status, joining the old London Spartan League in 1984 and the Isthmian League in 1987. In 1990 they won the FA Vase, as well as their regional division of the league. The following year they were promoted to the league's Premier Division for the first time but were relegated in 1998. This particular match was played to celebrate the newly installed floodlights at Beaconsfield Road. At the time this was the name of the ground (latterly to be known as 'The Warren"). I caught the train at Paddington and alighted at Southall. However, The Southall end of Beaconsfield Road does not connect with the Hayes end. There is a brook running through and it is not possible to cross. After a detour we eventually found the ground. After the match we went to Hayes station to catch our return train to Paddington.