Maidstone is the county town of Kent, 32 miles south-east of London. The River Medway runs through the centre of the town, linking it with Rochester and the Thames Estuary. Historically, the river was a source and route for much of the town's trade as the centre of the agricultural county of Kent, known as the Garden of England. There is evidence of a settlement in the area dating back to beyond the Stone Age. Maidstone's economy has changed over the years from being involved in heavy industry, to more light industry and service industries. Neolithic finds have revealed the earliest occupation of the area, and the Romans have left their mark in the road through the town and evidence of villas. The Normans set up a shire moot, and religious organisations established an abbey at Boxley, hospitals and a college for priests. Today’s suburb of Penenden Heath was a place of execution in medieval times. Maidstone's charter as a town was granted in 1549; although briefly revoked, a new charter in 1551 created the town as a borough. The charter was ratified in 1619 under James I, and the coat of arms, bearing a golden lion and a representation of the river, was designed. Recently to these arms were added the head of a white horse (representing Invicta, the motto of the county of Kent), a golden lion and an iguanodon. The iguanodon relates to the discovery in the 19th century of the fossilised remains of a dinosaur, now in the Natural History Museum in London. 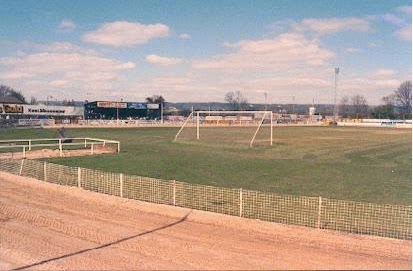 Maidstone United were formed in 1897 and play at the Athletic Ground on London Road. The club played in various amateur leagues and the Southern League, which was major semi-professional league in southern England until the formation of the Alliance Premier League in 1979.

This Pieman visited London Road after work, travelling by train to Maidstone. A strong Tottenham Hotspur side won 2-1 in the testimonial match for long serving Brian Thompson. 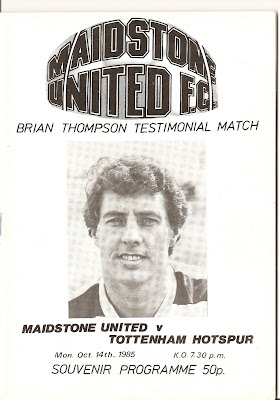