The Doomsday Book shows Burslem (listed as Bacardeslim) as a small farming hamlet; strategically sited above a vital ford at Longport, part of the major pack horse track out of the Peak District and Staffordshire Moorlands to the Liverpool/London road. As far back as the late 12th century a thriving pottery industry existed, based on the fine & abundant local clays. After the Black Death, Burslem emerges in the records as a medieval town - the 1536 stone church is still standing and in use. Until the mid-1760s Burslem was relatively cut off from the rest of England; it had no navigable river nearby, and there were no good & reliable roads. By 1777 the Trent and Mersey Canal was nearing completion, and the roads had markedly improved. The town boomed on the back of fine pottery production & canals, and became known as 'The Mother Town' of the six towns that make up the city. In 1910 the town was federated into the county borough of Stoke-on-Trent, and the borough was granted city status in 1925. Many of the novels of Arnold Bennett evoke Victorian Burslem, with its many potteries, mines, and working canal barges. The Burslem of the 1930s to the 1980s is evoked by the paintings and plays of Arthur Berry. Burslem contains Britain's last real working industrial district (i.e.: where people live within walking distance of the factories of a single heavy industry - in this case, the potteries); and thus much of the nineteenth-century industrial heritage, buildings & character have survived intact.

Though no precise details are known of the club's foundation, comprehensive research indicated that it was probably formed in 1879 as an offshoot of Porthill Victoria football club and took its name from its location, in the valley of canal ports. However, the story still given on the club website is that Port Vale F.C. was formed in 1876, following a meeting at Port Vale House, from where the club was supposed to have taken its name. They played their football at Limekiln Lane, Longport and from 1880 at Westport. The club moved to Burslem in 1884, changing its name to Burslem Port Vale in the process, they played at Moorland Road before moving into the Athletic Ground in 1885. In 1892 the club were founder members of the Football League Second Division. The club dropped 'Burslem' from their name in 1907 – a dark time of financial difficulties where the club were forced to resign from the league. However the club's fortunes soon improved, they moved into their new home of The Old Recreation Ground in 1912 and returned to the Football League in October 1919, taking over the fixture list of Leeds City in the Second Division, who were disbanded because of financial irregularities. The club saw their first relegation during the 1928–29 season, going from the Second Division to the Third Division North. They came up the following season as champions, the 1930–31 season saw a 5th place finish in the second tier of English football, their greatest league finish ever. After this peak, the club were once again relegated in the 1935–36 season and remained in the third tier until World War II. In 1950, Vale Park was completed, the club's fifth ground. The 1953–54 season saw Vale storming to the Third Division North title as well as reaching the semi–finals of the FA Cup, losing out to eventual winners West Brom in very controversial fashion, seeing an Albert Leake goal disallowed for offside. Three years later, the club were once again relegated, and once again became founder members of a league – this time the Football League Fourth Division. Their first season in this new division was extremely successful as the club took the title with a club record 110 goals. During the 1960s, the Vale fans witnessed numerous good cup runs, though never reaching close to their 1954 semi–final appearance. In 1967, Stanley Matthews took over as manager, his reign ended in tears in 1968 as Vale were expelled from the Football League over seemingly 'illegal payments' made to players (this punishment was reduced on appeal to a re-election vote, which the club successfully won). The club was promoted back to the Third Division in 1970; however, the 1970s did not prove a successful period for the Valiants, as the club languished in the bottom half of the Third Division for much of the decade. A succession of managers failed to prevent relegation in 1977–1978. The season ending in 1980 saw Port Vale finish 20th in the Fourth Division (88th overall), the club's worst ever finish. They eventually achieved their first success for thirteen years in 1982–83, when Vale were promoted to the Third Division in third place, passing Crewe on the way up. Unfortunately this success did not last very long and they soon found themselves relegated again. 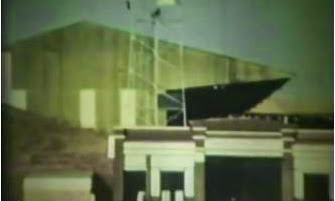 This Pieman took advantage of a weekend stay in Birmingham to visit Vale Park. The home side comprehensively defeating Southend United 4-0.Vale Park was reached by bus from Stoke on Trent station. 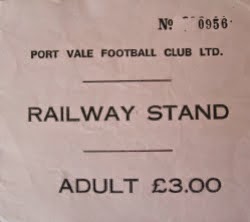 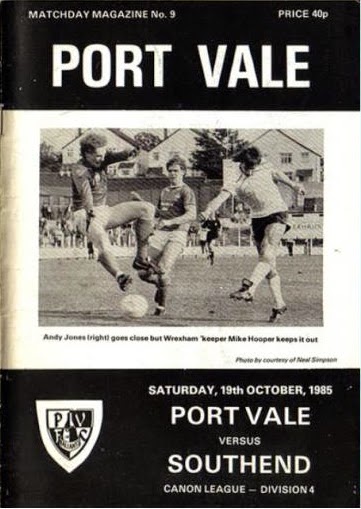