St Neots is the largest town in Cambridgeshire, and since 1113 when the Priory of St Neots came into being has been an important bridge-head over the River Great Ouse. It is this bridge, and the convergence of the main roads from Huntingdon, Kimbolton and Bedford, around, which the prosperity of the town of St Neots has developed. John Bellingham the only man to assassinate a British Prime Minister, Spencer Perceval on 11 May in 1812 lived in St Neots. He had been unhappy that he was unable to obtain compensation for being unfairly imprisoned in Russia. He was found guilty and hanged on Monday May 18 1812.

A strong Spurs side eased to victory in this friendly match played at Shortsands. There were 'flexible' floodlight pylons at this venue - presumably something to do with the ground being surrounded by housing. The two clubs had faced each other previously when members of the Metropolitan League and there were plenty of references to this in the match programme. At the time of this match, direct trains from London to St Neots were limited and this Pieman had to change at Hitchin for both the outward and return legs. 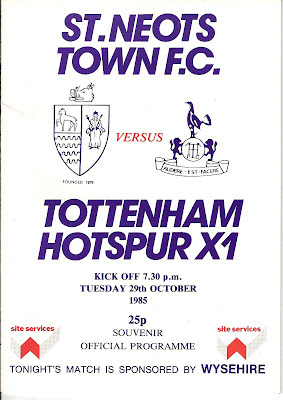 The Pieman's subsequent visit to 'new' Rowley Park
Posted by Pieman at 11:59 pm