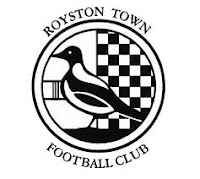 Royston is a town in Hertfordshire. Before the boundary changes of the 1890s, the boundary between Hertfordshire and Cambridgeshire ran east-west through the centre of town along the middle of Melbourn Street. The town grew up at the crossing of two ancient thoroughfares, Ermine Street and the Icknield Way; the former was created after the Roman conquest, while the Icknield Way has long been accepted as a prehistoric routeway. These roads are sometimes called military roads as they were prepared or improved by Roman soldiers to facilitate their access to the hinterland of Britain. The town lies on the northern slopes of the Hertfordshire Chalk Downs. The Greenwich Meridian passes through the point where the bypass meets the original A505 alignment. The town centre is just 1-minute 27 seconds west of the meridian. In 1742 a strange cave carved out of the chalk was discovered in the centre of town. Royston Cave is located underneath the central crossroads of the town. 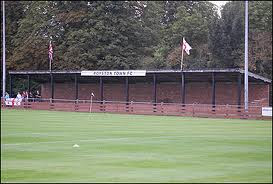 Royston Town was formed in 1875 and is the second oldest club in Hertfordshire. During this time 'The Crows' have played on four grounds, Newmarket Road, Baldock Road, Mackerall Hall before moving to their current home, Garden Walk in 1932. After the First World War the club entered the Buntingford & District League and in 1921, when the Club was affiliated to the Cambs FA they won the Creake Shield. The clubs first major honour came in guise of the Herts County Premier League title in 1969–70 and they repeated the feat in 1972–73 and 1976–77. In 1978 they rejoined the South Midlands League and won the Division One title at the first time of asking. Success continued with a Cup Final appearance in the Herts Charity Shield for the first time in 1979 and runners up spot in the South Midlands League Premier Division in 1980. The Herts Charity Shield was won in 1981–82 and two years later the club joined the Isthmian League Division Two North.

This Pieman attended this friendly match on a November Saturday morning. From the railway station it took little more than 10 minutes to walk to the stadium. The legendary Pat Jennings kept goal for the Spurs side in a 2-1 victory over their hosts. Dave Hattersley was at the match and kindly gave us a lift down the A10 to Tottenham where we saw the first team in action that afternoon.