Wokingham is a market town and civil parish in Berkshire in South East England about 33 miles west of central London. It is about 7 miles east-southeast of Reading and 3 miles west of Bracknell. It contains an area of 557 acres. It is the seat of the Borough of Wokingham, and forms part of the wider Reading/Wokingham Urban Area. The Counties (Detached Parts) Act resulted in its transfer to the county of Berkshire. Wokingham was a borough before the 1974 reorganisation of local government, when it merged with Wokingham Rural District to form the new Wokingham District. What had been Wokingham Borough became Wokingham Town, but retained its mayor. The formerly important industry of brick making has given way to software development, light engineering and service industries. At one point Wokingham was known to have the largest number of public houses per head of the population in the United Kingdom, although in recent decades many pubs around the town have closed, while the population has greatly increased. Wokingham means 'Wocca's people's home'. Wocca was apparently a Saxon chieftain who would also have owned lands at Wokefield in Berkshire and Woking in Surrey. In Victorian times, the name became corrupted to Oakingham, and consequently the acorn with oak leaves is the town's heraldic charge, granted in the 19th century. The character of Tom the chimney sweep in Charles Kingsley's classic childhood story The Water Babies was based on the life and times of a Wokingham boy called James Seaward, who was a boy sweep in Victorian times.

Wokingham Town Football Club was founded in 1875, which makes them the fourth oldest club in Berkshire, with only Reading, Abingdon, and Maidenhead having been formed only a few years earlier. The club's original ground was in Oxford Road, but after a few years a pitch was laid out on the cricket ground in Wellington Road. In 1896 a further switch was made to Langborough Road and some ten years later the club moved to their long-term ground in Finchamstead Road. Town entered the Ascot & District league and quickly consolidated their position in local football, so much so, that in the 1909-10 season tickets were selling at 2s 6d each. In 1910-11 Wokingham Athletics second eleven joined forces with Town and there is little doubt that this paved the way to the club's first championship in the following season. By 1911-12 Wokingham were unchallenged leaders of local football and the following year they enjoyed their most successful season when they won the Ascot League and the Camberley Hospital Cup. After the 1st World War a dispute broke out between Wokingham and the League, which led to the clubs' withdrawal, and in 1921 they entered two teams in the Reading Temperance League. In this first season Wokingham reached the semi finals of the Reading Town Cup and the Berks & Bucks Junior Cup, both for the first time. The year 1928 was another important milestone in Town's history, for not only was the league championship won for the second time, but also the purchase of the Finchamstead Road ground was completed. The new grandstand and pavilion were built at a cost of £630, and they were officially opened in 1939, with a special match against Chelsea FC, who won 5-2 before a crowd of 900. In 1940 the supporters club was founded and their remarkable talent for raising funds allowed the rise from junior football to senior football in the years that followed. In 1953 the final of the Berks & Bucks Intermediate Cup was reached for the first time, and the stage was set for entry into senior amateur football. The club joined the Metropolitan League and subsequently transferred to the Delphian League. The 1957-58 season brought a memorable Amateur Cup run, which saw the club reach the quarter finals, before losing 3-2 at Crook Town in front of a crowd of nearly 10,000. In 1959 Town were admitted to the Corinthian League, in 1962 the switch was made to the Athenian League, and then to the Isthmian League in 1973. 1969 saw the club's first success in the Berks & Bucks Senior Cup, when a strong Slough side was defeated in the final at Loakes Park, High Wycombe. 1981-82 season saw Wokingham win the Isthmian League Division 1 title by 13 points. In 1982-83 they finished 17th in the Premier Division and reached the first round proper of the FA Cup, when they took Cardiff City to a replay. They also won the Berks & Bucks Senior Cup against Bracknell 2-0. 1983-84 saw them finish in 8th place after a bad start. 1984-85 saw a 4th place finish, the last 16 of the FA Trophy and another Berks & Bucks Cup win, this time over Chesham. 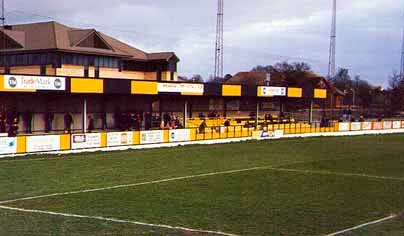 This Pieman travelled from London Waterloo to Wokingham station. The walk to the ground took around ten minutes. A competitive encounter for a friendly saw the home side share the spoils in a 1-1 draw with a young Tottenham Hotspur side. 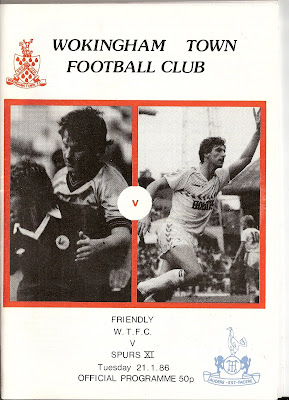