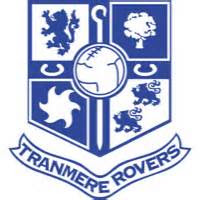 Birkenhead is a town within the Metropolitan Borough of Wirral in Merseyside. Historically in Cheshire, it is on the Wirral Peninsula, along the west bank of the River Mersey, opposite the city of Liverpool. The name Birkenhead is possibly from the Old English bircen meaning birch tree, of which many once grew on the headland which jutted into the river at Woodside. The earliest records state that the Mersey ferry began operating from Birkenhead in 1150, when Benedictine monks under the leadership of Hamon de Mascy built a priory there. Distanced from the Industrial Revolution in Liverpool by the physical barrier of the River Mersey, Birkenhead retained its agricultural status until the advent of steam ferry services. In 1817 a steam ferry service started from Liverpool to Tranmere and in 1822 the paddle steamer, Royal Mail, began operation between Liverpool and Woodside. Shipbuilding started in 1829. An iron works was initially established by William Laird in 1824 and was joined by his son John Laird in 1828. The business eventually became Cammell Laird. In addition to the ferries, the Mersey Railway tunnel in 1886 and the Queensway road tunnel in 1934 gave rapid access to Liverpool. This opened up the Wirral Peninsula for development, and prompted further growth of Birkenhead as an industrial centre. The town's population grew from 110 in 1801 to 110,912 one hundred years later and stood at 142,501 by 1951. In September 1932 thousands of unemployed people protested in a series of demonstrations organised by the local branch of the National Unemployed Workers Movement. After three days of rioting, police were brought in from elsewhere to help quell the rioters.


Tranmere Rovers were, initially, formed as Belmont Football Club when the football arms of two cricket clubs – Lyndhurst Wanderers and Belmont – came together in 1884. On 15 November 1884, they won their first game 4–0 against Brunswick Rovers. This was a friendly match, as there were no leagues until 1888. Under the presidency of James McGaul, the team had a successful inaugural season, losing only one of their fifteen matches. An unrelated, disbanded side had played under the name "Tranmere Rovers Cricket Club (Association football section)" in 1881–82. On 16 September 1885, before their second season began, Belmont F.C. adopted the name Tranmere Rovers. Tranmere played their first matches at Steeles Field in Birkenhead. In 1886 and entered their first competition: the Liverpool and District Challenge Cup. In 1887, they bought Ravenshaws Field from Tranmere Rugby Club. In 1889, they entered the West Lancashire League. They joined the Combination, a much stronger league, in 1897, and won the championship in 1908. In 1910, they entered the Lancashire Combination and in 1912 showed their ambition by moving to the present Prenton Park site, with an 800-seat stand. Tranmere won the Lancashire Combination Championship in 1914. Rovers continued to play throughout the First World War, although their players were criticised for avoiding military service, despite being employed in the local shipyards. Following the expulsion of Leeds City Reserves in 1919, Tranmere were able to enter the Central League. Their timing was excellent as the following season; four Central League clubs – including Tranmere – were invited to join the new Division Three North. In 1924, local youngster Dixie Dean made his debut aged 16 years 355 days. He played 30 games for Rovers, scoring 27 goals, before being transferred to Everton for £3,000. Rovers won their first championship in the Football League in 1938 with victory in Division Three North and, hence, promotion to Division Two for the first time. It is still Rovers' only championship in the Football League. However, they were relegated the next season winning six matches – the record for the worst performance of any team in Division Two. Prenton Park emerged from the Second World War largely unscathed. They rejoined the Football League in Division Three North and stayed there until the 1958 restructuring of the football league's lower divisions, when they secured a place in the new national Division Three (founder members). In 1961, Tranmere's inspirational captain, Harold Bell, left the club and was certainly missed as Rovers were relegated to Division Four for the first time. They were promoted back to Division Three in 1967, a year before a new 4,000-seater main stand was opened, and Rovers reached the fifth round of the FA Cup for the first time. Tranmere returned to the Fourth Division in 1975. The following decade the club were usually in the lower reaches of the Fourth Division, beset by financial problems, and attaining crowds of less than 2,000.


This Pieman was staying on Merseyside for the following day's Everton v Spurs match. The journey from Liverpool for this Friday evening League Division Four match was made by train from Liverpool to Rock Ferry Station. The walk to the ground taking just less than fifteen minutes. An entertaining match resulted in the home side defeating Scunthorpe United 2-1. 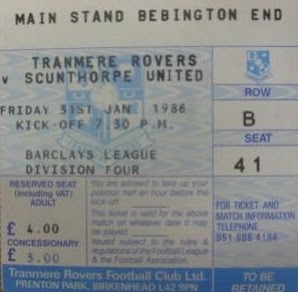 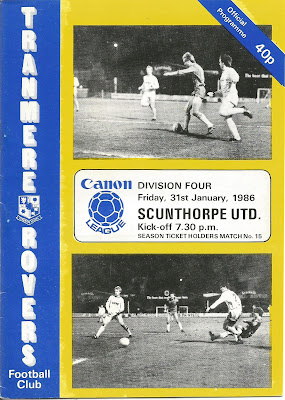