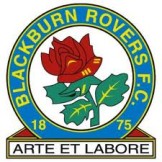 Blackburn is a large town in Lancashire. It lies to the north of the West Pennine Moors on the southern edge of the Ribble Valley, 9 miles east of Preston, and 20.9 miles north of Manchester. Blackburn is bounded to the south by Darwen, with which it forms the unitary authority of Blackburn with Darwen; Blackburn is its administrative centre. Blackburn was recorded in the Doomsday Book as Blacheborne in 1086. The origins of the name are uncertain. It has been suggested that it may be a combination of an Old English word for bleach, together with a form of the word "burn", meaning stream, and may be associated with a bleaching process. Alternatively, the name of the town may simply mean "black burn", or "black stream". A former mill town, textiles have been produced in Blackburn since the middle of the 13th century, when wool was woven in people's houses in the domestic system. Flemish weavers who settled in the area during the 14th century helped to develop the woollen cottage industry. James Hargreaves, inventor of the spinning jenny, was a weaver in Blackburn. The most rapid period of growth and development in Blackburn's history coincided with the industrialisation and expansion of textile manufacturing. Blackburn was a boomtown of the Industrial Revolution, and amongst the first industrialised towns in the world. Blackburn's textile sector fell into terminal decline from the mid-20th century and subsequently faced similar challenges to other post-industrial northern towns, including de-industrialisation, economic deprivation and housing issues. Since the 1950s the town has experienced significant levels of migration, particularly from India and Pakistan.

Blackburn Rovers FC was founded following a meeting, at the Leger Hotel, Blackburn, on 5 November 1875. The meeting was organised by two young men, namely John Lewis and Arthur Constantine. The purpose of the meeting was "to discuss the possibility of forming a football club to play under Association rules". The first match played by Blackburn Rovers took place in Church, Lancashire on 18 December 1875 and was a 1–1 draw. In 1888 the club became a founding member of The Football League. In 1890 Rovers moved to its permanent home at Ewood Park. Blackburn Rovers struggled during the early years of the 20th century. Major renovations were made to Ewood Park: in 1905 the Darwen End was covered at a cost of £1680 and the new Nuttall Stand was opened on New Year's Day 1907. During the first three decades of the 20th century, Blackburn Rovers were still considered a top side in the English league. They were First Division champions in 1911–12 and 1913–14, and F.A Cup winners in 1927–28 with a 3–1 victory against Huddersfield Town, but the F.A Cup win was their last major trophy. Blackburn Rovers maintained a respectable mid-table position in the First Division until they were finally relegated (along with Aston Villa) from the top flight (for the first time since the foundation of the league) in the 1935–36 season. When the league resumed after the war, Blackburn Rovers were relegated in their second season (1947–48). At this time the tradition of burying a coffin began. The club remained in the second division for the following ten years. After promotion in 1958, they again returned to the mid-table position they had occupied in the earlier part of the century. During this time, they seldom made a serious challenge for a major trophy – although they did reach the 1960 FA Cup final when managed by Scot Dally Duncan. Rovers lost this game 3–0 to Wolverhampton Wanderers after playing most of the game with only 10 men on the field following an injury to Dave Whelan, who broke a leg. During the 1970s, Blackburn Rovers bounced between the Second and Third Divisions, winning the Third Division title in 1975, but never mounted a challenge for promotion to the First Division despite the efforts of successive managers to put the club back on track, and fell back into the Third Division in 1979. They went up as runners up in the Third Division in 1980 and have remained in the upper two tiers of the English league ever since. A second successive promotion was nearly achieved the following year, but the club missed out on goal difference.

This Pieman visited Ewood Park for an entertaining clash with Portsmouth. The home side won by the only goal of the match. The journey from London Euston involved changing trains at Preston. From there we took a local service to Mill Hill station which is slightly nearer to Ewood Park than Blackburn. However, more trains serve the latter which apart from Preston, also connects with Manchester services. 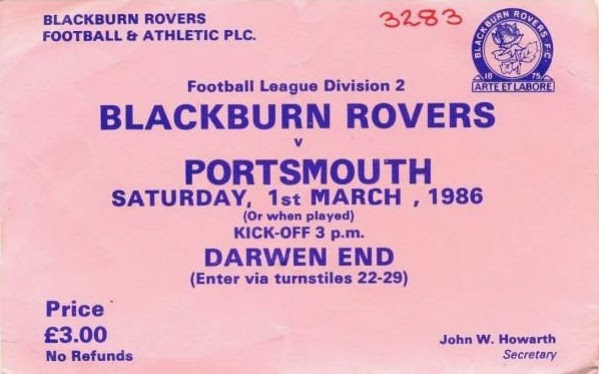