Chelmsford is the county town of Essex, in the East of England. It is located in the London commuter belt, approximately 32 miles northeast of Charing Cross, London, and approximately the same distance from the once provincial Roman capital at Colchester. In the Doomsday Book of 1086 the town was called Celmeresfort and by 1189 it had changed to Chelmsford.  Chelmsford was significantly involved in the Peasant’s Revolt of 1381, and Richard II moved on to the town after quelling the rebellion in London. An important Anglo-Saxon burial was discovered at Broomfield to the north of Chelmsford in the late 19th century and the finds are now in the British Museum. The road 'Saxon Way' now marks the site. In the 17th century many of the victims of Matthew Hopkins (the self-styled "Witchfinder General") spent their last days imprisoned in Chelmsford, before being tried at the Assizes and hanged for witchcraft. In 1899, Guglielmo Marconi opened the world's first "wireless" factory under the name The Marconi Wireless Telegraph & Signal Company in Hall Street employing around 50 people. The company was later called the Marconi Wireless Telegraph Company Ltd. For this reason Chelmsford is credited as the "birthplace of radio”.

Chelmsford City FC was established in 1938 and took over the New Writtle Street ground, which was purchased in 1939. The club joined the Southern League and made an immediate impact in the FA Cup, reaching the fourth round in their first season after defeating two League clubs before losing at Birmingham City.  During the early parts of World War II it was shared by Southend United, before it became a barrage balloon site in 1942. Floodlights were installed in 1960. Several plans were made to increase facilities at the ground, including installing a swimming pool and building office blocks or a hotel, but none came to fruition. 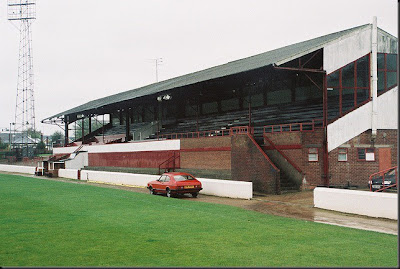 This particular match was a testimonial for Colin Johnson. A strong Tottenham Hotspur side scored the majority of the ten goals in this match. This Pieman had travelled by train from London Liverpool Street to Chelmsford station from where a walk of little over 5 minutes enabled him to reach the stadium. 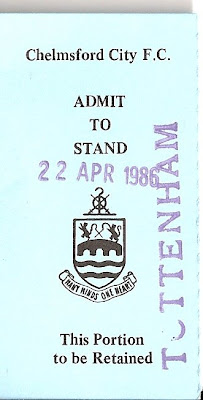