Sawbridgeworth is a small, mainly residential, town and also a civil parish in Hertfordshire, England. It is four miles south of Bishop's Stortford, twelve miles east of Hertford and nine miles north of Epping. The river Stort flows through the east of the town, past the Maltings. Prior to the Norman Conquest, most of the area was owned by the Saxon Angmar the Staller. The Manor of "Sabrixteworde" (one of the many spellings previously associated with the town) was recorded in the Doomsday Book. After the Battle of Hastings it was granted to Geoffrey de Mandeville I by William the Conqueror. Local notables have included John Leventhorpe, an executor of both King Henry IV and King Henry Vs' wills, and Anne Boleyn, who was given the Pishiobury/Pishobury estate, located to the south of the town. Much of the town centre is a conservation area; many of the buildings date from the Tudor, Stuart, and Georgian periods. Great St. Mary's church was originally built in the 13th century (although a church on the site existed in Saxon times) and includes a Tudor tower containing a clock bell (1664) and eight ringing bells, the oldest of which dates from 1749. The ghost of Sir John Jocelyn, known for his love of horses, is reputed to appear riding a white horse on the old carriage drive every 1 November. The town's prosperity came from the local maltings, owned by George Fawbert and John Barnard; in 1839 they set up the Fawbert and Barnard charity to fund local children and their education, funding a local infant school that still exists today. During World War II RAF Sawbridgeworth operated Supermarine Spitfires, Westland Lysander, P-51 Mustang, and de Havilland Mosquitos. 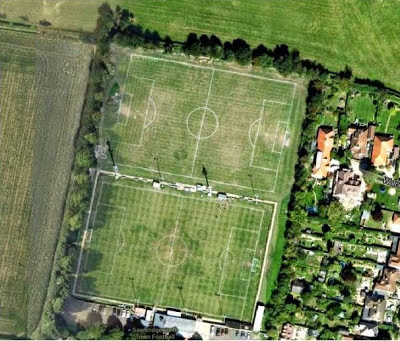 The football club was founded in 1897 as Sawbridgeworth F.C. The club entered the Herts County League Division One in the 1953–54 but left after only one season. They joined the Essex Olympian League in 1966 and were crowned champions in 1971–72. They joined the Essex Senior Football League in 1976 and changed their name to Sawbridgeworth Town. They achieved their best FA Vase performance in 1980–81 when they reached a third round replay. The club plays at Crofters End. 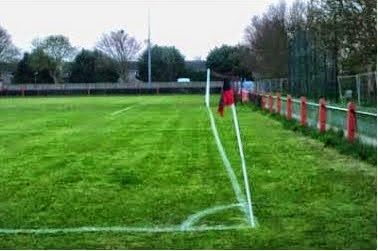 This Pieman made the relatively short journey from Harlow to Sawbridgeworth by train. From the railway station it takes around ten minutes to walk uphill to Crofters End. On this occasion the home side took the points over Eton Manor in this Essex Senior League clash with the only goal of the match. 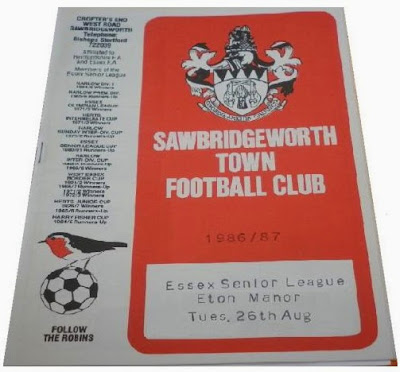