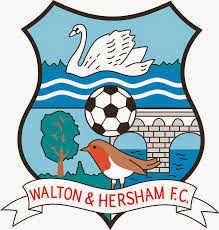 Walton-on-Thames is a town on the River Thames in the Elmbridge borough of Surrey. The town is centred 15.3 miles south west of Charing Cross and is between the towns of Weybridge and Molesey. Its waterside has the Thames Path National Trail between Sunbury Lock and Shepperton Lock. The name "Walton" is Anglo-Saxon in origin and is believed to mean "Briton settlement" (literally, "Welsh Town" - wealas tun). Even before the Romans and the Saxons were present, there was a Celtic settlement here. The Anglo-Saxon word for the Celtic inhabitants who lived here before them is "Wealas", meaning "foreigners" or "strangers". Walton-on-Thames is served by Walton-on-Thames railway station, which provides 4 trains per hour to London Waterloo, consisting of 2 semi-fast services and 2 stopping services, with the semi-fast services taking only 25 minutes to reach the terminus. This has proven pivotal to the demographics and to the nature and degree of the town's development - in 1851 its population was 4,106 which more than quadrupled in the 60 years to 1911, when its population reached 19,142. Some of the sketches for Monty Python were filmed in Walton. The old town hall can be seen in one sketch. Another sketch shows an Admiral Nelson dummy being thrown from one of the flats in Wellington Close.


In 1945, after World War II, Walton F.C. amalgamated with Hersham F.C. to form Walton & Hersham. The club joined the Corinthian League, winning it first in the 1946–47 season and then again the following two seasons. The club won the Surrey Senior Cup in the 1947–48 season. They were elected to the Athenian League for the 1950–51 season and won the Surrey Senior Cup again. Walton & Hersham reached the FA Amateur Cup semi-finals in 1951–52 and in 1952–53. They achieved their all-time record crowd when ten thousand spectators turned up to watch an FA Amateur Cup tie with Crook Town. The team included defender C. R. "Jack" Neale who represented Great Britain at the Olympics and the club's record goal-scorer Reg Sentance. Walton & Hersham reached the FA Cup first round proper for the first time in 1957–58. The club won the Surrey Senior Cup for a third time in 1960–61 and retained the trophy the following season. The Athenian League expanded in 1963 and Walton & Hersham were placed in the Premier Division. A period of mid-table football followed until the 1967 appointment of Allen Batsford as manager heralded a new era of success. In 1968–69 he won the Athenian League. This was followed by two successive visits to the FA Cup first round proper (in 1969–70 and 1970–71) and the Surrey Senior Cup was won again in 1970–71. Walton & Hersham were elected to the Isthmian League in 1971. The 1972–73 season is statistically the greatest for the club. They won the Surrey Senior Cup, came runners-up in the league, reached the FA Cup second round proper for the first time and, most prestigiously, won the FA Amateur Cup, defeating Slough Town at Wembley Stadium. They set a unique record by winning the competition without conceding a goal. Players including Dave Bassett, Willie Smith and Roger Connell became regulars in the England amateur international team. In 1973–74, the club reached the FA Cup second round proper again, having beaten Brian Clough's Brighton & Hove Albion at Goldstone Ground 4–0. In 1974, Batsford left to manage Wimbledon and took players with him. Walton & Hersham were relegated in 1975 and, although they reached the FA Cup first round proper again in the 1975–76 season, they went close to extinction in the late 70s. They inspired the name of punk band Sham 69 (who formed in 1976), as they derived it from a piece of graffiti which read 'Walton & Hersham 69'


This Pieman visited Stompond Lane one evening after work. The journey from London Waterloo to Walton-on-Thames took around twenty five minutes and the walk to the ground took a further 15 minutes. The home side defeated visitors Dorking 2-1 in this Isthmian League encounter. 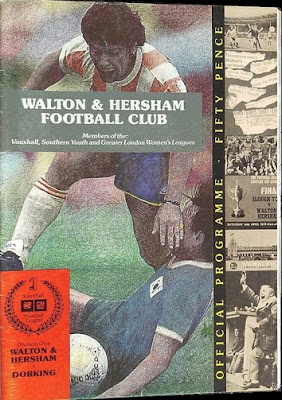