Eton Manor Football Club was formed in 1901 by rich and influential families of the likes of Barings, Villiers and Lord Chelsea for the benefit of bringing sport to the poor and underprivileged youth of the East End of London. Various clubhouses were used in the early years and eventually the sports ground at Hackney Marshes known as "The Wilderness" was used, this started a period of great success in the thirties for the club's football, cricket and rugby sides. The success continued into the forties, fifties and sixties with many famous players coming from the club, Alf Ramsey and Len Wills are just two to have played for the club in the past. The club became founder members of the Aetolian League in 1959 and followed other former member clubs into the Greater London League as founder members in 1964, winning the championship at the first attempt in 1964–65. The club played at several different venues during this period. After becoming founder members of Metropolitan-London League Division One in 1971, and finishing third in 1973–74, the club moved to the Essex Senior League in 1975 and have stayed with the competition ever since. The first few years in the Essex Senior League were relatively successful for the Manor, with the club well established in the top half of the division. However, the club finished bottom in 1981 and have remained towards the bottom since. This Pieman visited Roding Lane on a Good Friday morning. The journey was made by London Underground, Central Line to Buckhurst Hill station from where a short walk enabled one to reach the ground. Visitors Woodford Town won this derby match by the odd goal in three. 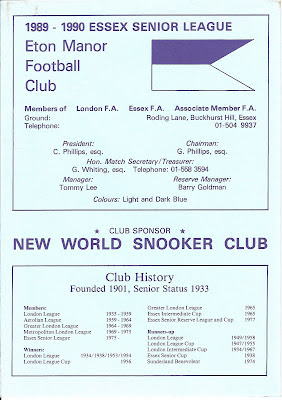