Greenwich is a district of South East London, England, located in the Royal Borough of Greenwich and situated 5.5 miles east south-east of Charing Cross. Greenwich is notable for its maritime history and for giving its name to the Greenwich Meridian (0° longitude) and Greenwich Mean Time. The town became the site of a royal palace, the Palace of Placentia from the 15th century, and was the birthplace of many in the House of Tudor, including Henry VIII and Elizabeth I. The palace fell into disrepair during the English Civil War and was rebuilt as the Royal Naval Hospital for Sailors by Sir Christopher Wren and his assistant Nicholas Hawksmoor. These buildings became the Royal Naval College in 1873. Also in the Royal Borough of Greenwich is the town of Eltham, which is situated on a plateau, high enough to offer unrestricted views across South London. Eltham Hill offers the steepest descent from the plateau to sea-level and the land to the north of Eltham rises to form the southern slope of Shooter's Hill, one of the highest points in London.

Greenwich Borough F.C. were formed as Woolwich Borough Council Athletic Club in 1928 and played most of their home games at Danson Park, Welling. The club joined the Woolwich and District League and were champions at the first attempt. They also reached the final of the Woolwich and District League Cup but lost 0–3 to Fibrent Athletic at Bexleyheath Town's ground. Due to their success, Woolwich Borough Council was awarded Senior Status and joined the Kent Amateur League Division 1. The club moved to its present ground at Harrow Meadow, Eltham in 1933, which they originally shared with a cricket club and the distance from the changing rooms to the original football pitch ultimately caused the ground to fail league grading requirements, however the club subsequently gained full use of the facilities and were able to move onto the area formerly occupied by the cricket pitch.  Shortly before the 1939– 40 season was due to start World War II broke out and the club disbanded. In 1965 the club changed their name to London Borough of Greenwich FC following a change of London Borough boundaries and in 1974 won their seventh Premier Division title in 15 years. Two seasons later they were again runners-up in the Queen Mary Cup. The reserves won the Divisional section of the Kent Junior Cup B in 1975–76. In 1976 the club moved to the London Spartan League, and the following year regained senior status. Two years later The Boro celebrated their Golden Jubilee by inaugurating their floodlights with a game against Charlton Athletic in front of over 2,000 spectators. Borough won the London Spartan League Senior Division title in 1980 but this was to be their only League title while playing in the competition. However, they were successful in capturing the London Spartan League Senior Cup in 1983.The club entered the FA Vase for the first time in 1980 but were knocked out in the 3rd Round by Burgess Hill Town. In 1984–85 the Club joined the Kent League under the new name of Greenwich Borough FC, finishing sixth at the first attempt. That same year though they won the Kent League Cup and the Kent Senior Trophy. Borough then won the League and League Cup double in 1987, scoring some 113 goals along the way. In 1988, the year of the 60th anniversary of the club, Boro again won the League, and hoped to progress with some major improvements to their Harrow Meadow ground. Sadly this was not to be, planning permission was not granted by the local council, and consequently a move to the then Southern League was thwarted. 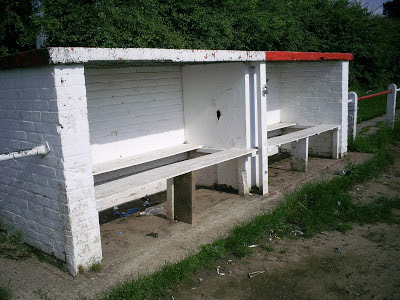 This Pieman visited Harrow Meadow as part of a double header on this Good Friday, having earlier been to Buckhurst Hill to watch Eton Manor. The journey was made by rail travelling from London Bridge to Kidbrooke station which is only a short walk from Harrow Meadow. The home side won a closely contested match by the only goal. 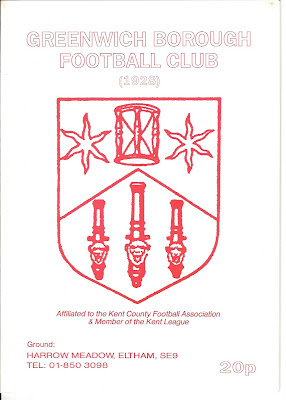