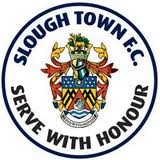 Slough is a town in Berkshire, about 20 miles west of central London. The first recorded uses of the name occur as Slo in 1196, Sloo in 1336, and Le Slowe, Slowe or Slow in 1437. It first seems to have applied to a hamlet between Upton to the east and Chalvey to the west, roughly around the "Crown Crossroads" where the road to Windsor (now the A332) met the Great West Road. The Doomsday Survey of 1086 refers to Upton, and a wood for 200 pigs, worth £15. From the mid-17th century, stagecoaches began to pass through Slough and Salt Hill, which became locations for the second stage to change horses on the journey out from London. By 1838 and the opening of the Great Western Railway, Upton-cum-Chalvey's parish population had reached 1,502. In 1849, a branch line was completed from Slough station to Windsor and Eton Central railway station, opposite Windsor Castle, for the Queen's convenience. 1918 saw a large area of agricultural land to the west of Slough developed as an army motor repair depot, used to store and repair huge numbers of motor vehicles coming back from the battlefields of the First World War in Flanders. In April 1920, the Government sold the site and its contents to the Slough Trading Co. Ltd. Repair of ex-army vehicles continued until 1925, when the Slough Trading Company Act was passed allowing the company (renamed Slough Estates Ltd) to establish an Industrial Estate. Spectacular growth and employment ensued, with Slough attracting workers from many parts of the UK and abroad. During World War II, Slough experienced a series of air raids, mostly in October 1940 (the largest number of people, five, dying as a result of one on the 13th), and an emergency hospital treating casualties from London was set up in Slough. Local air raid deaths and deaths at the hospital account for the 23 civilian lives recorded lost in the borough area. After the War, several further large housing developments arose to take large numbers of people migrating from war-damaged London.

Slough F.C. was originally formed in 1890 and initially played in the Southern Alliance alongside the likes of Tottenham Hotspur and Windsor & Eton before later moving on to the Great Western Suburban League. In 1921 it attempted to join the Isthmian League but lost out to Wycombe Wanderers in the voting. Instead Slough chose to join the Spartan League. In 1936 the owners of the club's ground, The Dolphin Stadium, sold up to a greyhound racing consortium, which ordered the football club to vacate the stadium three years later. After being forced to groundshare with Maidenhead United for several years, the club agreed to a merge with Slough Centre F.C. to return to a ground in their home town. The new club took the name Slough United F.C. After The Second World War Slough Utd was reluctant to rejoin the Spartan League and led a breakaway movement to form a new league, which became the Corinthian League. It was from this that the club derived its nickname of "The Rebels". Shortly after this the two clubs which had merged to form Slough United separated once again, with the former Slough F.C. continuing under the new name of Slough Town F.C. Slough Town won the Corinthian League in 1950–51 but in 1964 the league folded and Slough, along with many other former Corinthian clubs, joined an expanded Athenian League. The Rebels were champions of this league on three occasions, with the third win earning promotion to the Isthmian League in 1973 when they also moved into Wexham Park Stadium. During the 1980s they were league champions on two occasions, the second of which brought promotion to the Football Conference. Slough lasted four seasons at this level, were relegated back to the Isthmian League, bounced back at the first attempt, and then played three more seasons of Conference football. 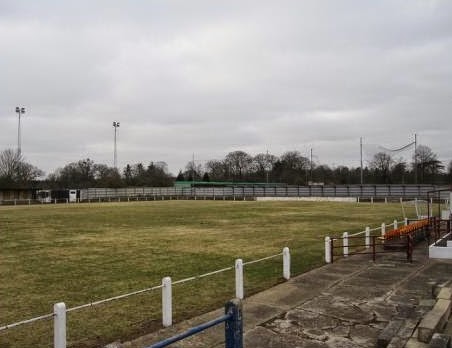 This Pieman visited Slough by train from London Paddington. From the station, Wexham Park is a twenty minute walk away. On the occasion of this match, an in form home side, including ex Chelsea and Crystal Palace forward Tommy Langley, was too strong for visitors Dulwich Hamlet, winning 2-0. 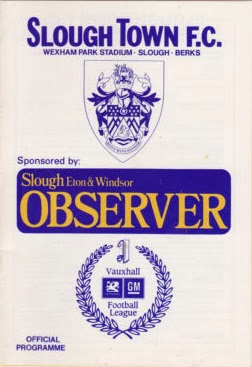