Ware is in Hertfordshire and lies on the north-south A10 road which is partly shared with the east-west A414 (Hertford to the west and Harlow to the east).  Archaeology has shown that Ware has been occupied since at least the Mesolithic period (which ended about 4000 BC). The Romans built a sizable settlement and foundations of several buildings, including a temple, two cemeteries and a well-preserved Roman skeleton of a teenage girl have been found. Ware was on Ermine Street, the Roman road from London to Lincoln. It has been said that Ware is one of the oldest continuously occupied sites in Europe. The modern name of the town dates from the Anglo-Saxon period when weirs were built to stop the invading Vikings from escaping in their longships after defeat by Alfred the Great in a battle near Ware. It was also a great coaching town, being on the Old North Road, less than a day's journey from London. In the 17th century Ware became the source of the New River, constructed to bring fresh water to London. With the River Lea flowing through the centre of Ware, transport by water was for many years a significant industry. As an old brewing town (and some of the old maltings still stand, although none are functional), barley was transported in, and beer out via the river. Bargemen born in Ware were given the "freedom of the River Thames" — avoiding the requirement of paying lock dues — as a result of their transport of fresh water and food in during the great plague of 1665–66. A local legend says that dead bodies were brought out of London, but there is no evidence for this. "Buryfield" in Ware is thought by many to be where these supposed bodies were buried. The name apparently originates from before 1666, with the burial of large numbers of Roman inhabitants of Ware.

The Football Club, who play at Buryfield, was founded in 1892 and although first called Ware Town soon changed its name to Ware FC.  This unassuming title makes it probably the shortest named affiliate of the Football Association and has caused problems for programme editors and journalists ever since. After the First World War the Club gained a league and cup double with a second Herts County League Championship and a fourth Herts Senior Cup win in 1922. The scenes in Ware when the team returned with the Senior Cup tells something about the hold that football had on local loyalties at the time. The local paper reported that "Large crowds awaited the return of the special train to Ware, everybody being in high spirits. The Cup was marched through the town in front of a cheering throng." Indeed, it was later recalled that the cup was taken through the town on subsequent nights and that stops were made outside public houses where it was charged with beer before being drained by the crowd. In the 1975/76 season Ware achieved entry to the expanding Isthmian League, where they have maintained their place ever since. 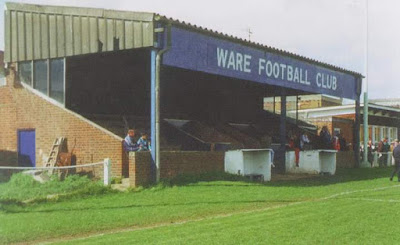 This Pieman travelled to Ware by train. The Buryfield ground being only a ten minute walk from the railway station. Extra time was required to settle an evenly contested cup tie with the home side having just a bit more of the required energy over the additional 30 minutes. 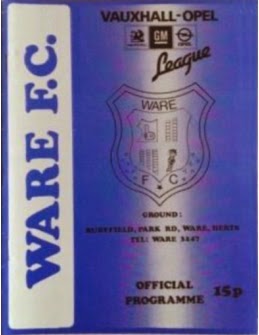