Bury is a town in Greater Manchester, England. It lies on the River Irwell, 5.5 miles east of Bolton, 5.9 miles west-southwest of Rochdale, and 7.9 miles north-northwest of the city of Manchester. Bury is surrounded by several smaller settlements, which together form the Metropolitan Borough of Bury, with Bury as the largest settlement and administrative centre. Historically a part of Lancashire, Bury emerged during the Industrial Revolution as a mill town centred on textile manufacture. Bury is regionally notable for its open-air market and its popularity has been increased since the introduction of the Manchester Metrolink tram system, which terminates in the town. The market is known for its supply of a local traditional dish - black pudding, served hot or cold and can be eaten either as a takeaway snack, or more commonly as an accompaniment or main ingredient of a meal starter or main course. One of Bury's most notable residents was Sir Robert Peel, Prime Minister of the United Kingdom and founder of the Metropolitan Police Service. A monument to Peel is outside Bury parish church and another, the austere Peel Monument, stands on a hill overlooking the locality.

Bury Football club was formed in 1885 by Aiden Arrowsmith following a meeting at the White Horse Hotel, between the Bury Wesleyans and Bury Unitarians Football Clubs. The first ever match at Gigg Lane took place on 12 September 1885 when Bury played a friendly match against Wigan, and won 4–3. In 1887 the first shed was built at Gigg Lane at a cost of £50 (although this debt was written off and never paid for), also in the same year Bury recorded their record defeat, 0–10 v. Blackburn Rovers in the FA Cup's 1st round. In 1906 the South Stand was built at Gigg Lane. In 1922, the ground was finally handed over to the club from the Earl of Derby as a gift. In 1900 Bury beat Southampton 4–0 in the FA Cup Final at Crystal Palace, and returned to the London venue in 1903. A second win was achieved without conceding a goal in the entire competition, including a record FA Cup Final score of 6–0 over Derby County, which remains the highest ever victory in an FA Cup Final. In 1924 the Main Stand was built, during this period Bury's ground was one of the best in the Football League. 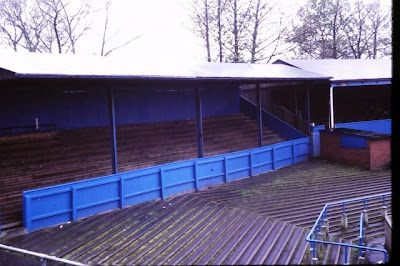 Staying in Manchester for the weekend in order to attend Manchester United v Tottenham Hotspur the following day, this Pieman was delighted to be able to visit Gigg Lane. The ground is only a short walk from the station along Manchester Road. A relatively tame Freight Rover (Football League Trophy) match was won by the home side over neighbouring Stockport County. 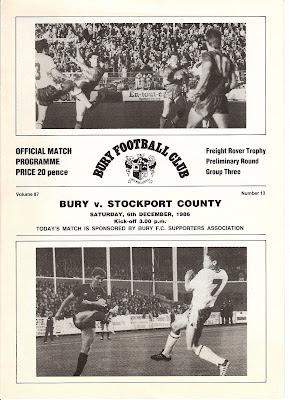