Cleethorpes is a town in North East Lincolnshire, England, situated on the estuary of the Humber and is a seaside resort. The name "Cleethorpes" is thought to come from joining the words "clee", an old word for clay, and "thorpes", an Old English/Old Norse word for villages, and is of comparatively modern origin. Before becoming a unified town, Cleethorpes was made up of three small villages, or "thorpes": Itterby, Oole and Thrunscoe, which were part of a wider parish called Clee (not to be confused with Old Clee). While there are neolithic and Bronze Age remains in the area, permanent occupation appears to date from the 6th century, when the Danes arrived, with substantial communities only appearing in the 9th century. The manor of Itterby was purchased in 1616 by the trustees of Peter Blundell's charity for the benefit of scholars and fellows at Sidney Sussex College, Cambridge from Blundell's School, Tiverton. This is reflected in many of the street and park names in the area, such as Blundell Park, the home ground of the football team, Grimsby Town, one of few English League clubs with a town or city name to have their home ground in a different community. 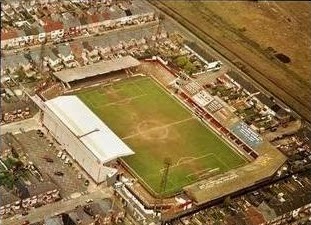 Grimsby Town F.C. was formed in 1878 after a meeting held at the Wellington Arms public house in Freeman Street. Several attendees included members of the local Worsley Cricket Club who wanted to form a football club to occupy the empty winter evenings after the cricket season had finished. The club was originally called Grimsby Pelham, this being the family name of the Earl of Yarborough, a significant landowner in the area. In 1880 the club purchased land at Clee Park which was to become their ground until 1889 when they relocated to Abbey Park, before moving again in 1899 to their present home, Blundell Park. Their original colours were blue and white hoops, which were changed to chocolate and blue quartered shirts in 1884. In 1888 the club first played league football, joining the newly formed 'Combination'. The league soon collapsed and the following year the club applied to join the Football League, an application that was refused. Instead the club joined the Football Alliance. In 1890 the club became a limited company and in 1892 finally entered the Football League, when it was expanded to two divisions. The first game was a 2–1 victory over Northwich Victoria. Grimsby Town and Hull City were the only two professional teams which had official permission to play league football on Christmas Day because of the demands of the fish trade. That tradition has now disappeared following the dramatic reduction of their trawler fleets in recent years. The club adopted their black and white striped kit in 1925 and their most successful period was during the inter-war period. In the 1934/5 season they attained their highest ever league position of 5th in Division One. With the resumption of the Football League for the 1946–47 season after the Second World War the club were relegated at the end of the 1947–48 season and have never returned to this level. Much of the 1950s and 1960s were spent alternating between the Second Division and the Third Division North, later the Third Division. In 1968 Grimsby slipped into the Fourth Division for the first time. The following season the club had to apply for re-election to the league having finished second from bottom. It was in this season that the lowest-ever attendance for a Football League match at Blundell Park was ever recorded; 1,833 saw a 2–0 defeat to Brentford. Three years later 22,489 people witnessed a home victory against Exeter City that saw the club promoted as Division Four Champions. This turnaround was credited to the appointment of Lawrie McMenemy as manager. The club stayed in Division Three until relegation in 1977, but was promoted again in 1979. A year later they finished as Third Division Champions under the stewardship of George Kerr and returned to the second tier of the English game. 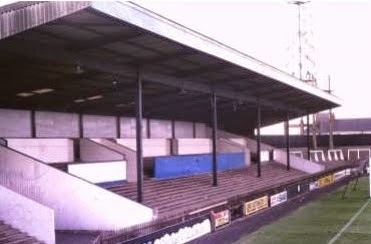 This Pieman visited Blundell Park for an early January League Division Two clash with Brighton & Hove Albion. The visitors won by the odd goal in three. The journey was made by train from London Kings Cross to Cleethorpes. The highlight of the day was being informed by a bouncer of a local pub that "you live in Essex, that's near Brighton - you can't come in". I guess you don't have to study geography to be a bouncer! 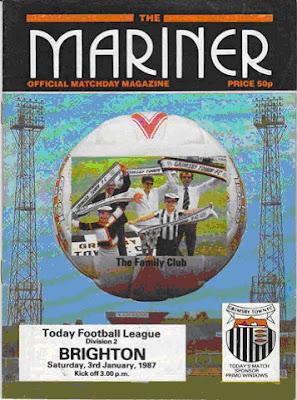